The Hyundai Creta and the Kia Seltos has a new rival to look out for. The Skoda Kushaq is set to storm the segment and we say it with good authority indeed. Here's our two cents on the car itself.

We are out and we are reviewing again, and this time it’s a new entrant in India’s largely contested mid-size SUV segment. Ladies and gentlemen, say hello to the Skoda Kushaq. This will take on some of the most popular badges like the Hyundai Creta and the Kia Seltos in India. So under this rather beautiful weather, we will determine whether it has the firepower to take on the segment leaders and whether it really lives up to its name of being an emperor.

Now in terms of visuals, the car shares quite a lot of resemblance with the Vision IN concept that we saw at the Auto Show in Delhi. Paying homage to the Czech glassmaking roots, a lot of the elements on the outside take inspirations from crystals. At the front, you get fully LED headlamps along with LED DRLs that gives the front an aggressive stance. This is accentuated even more with the large grille that sits in between the lights. At the side, the same inspiration can be seen in the form of multiple creases that run along the length of the car. The car gets aluminium finish roof rails that also adds to the premium appeal. It also comes with plastic body cladding and skid plates at the front and back that not only adds to its SUV charm but also protect the car, if and when you decide to take it off the tarmac. At the back, the car gets inverted L tail lamps that are again very crystalline with sharp edges. Speaking of which there are plenty of creases and cuts at the back, which we believe is tastefully done without a hint of looking too busy. The one word that comes to your mind when you step inside the cabin of the Kushaq, is premium. You get elements like a Piano black finish and textured materials on the dashboard and a few other elements like a neatly laid out semi-digital instrument cluster and a 10-inch touchscreen infotainment system. The infotainment system comes with connectivity features including Apple CarPlay and Android Auto. The touch response is quite dynamic and doesn’t show any hints of lag. While the instrument cluster of the car is fairly neat, the car does miss out on a fully digital unit.

Now, on the basis of its customer research, Skoda has done away with any sort of buttons and knobs for its AC controls, instead, there is a soft-touch panel, that in our opinion have too small of touch buttons that are a little distracting to use while driving. 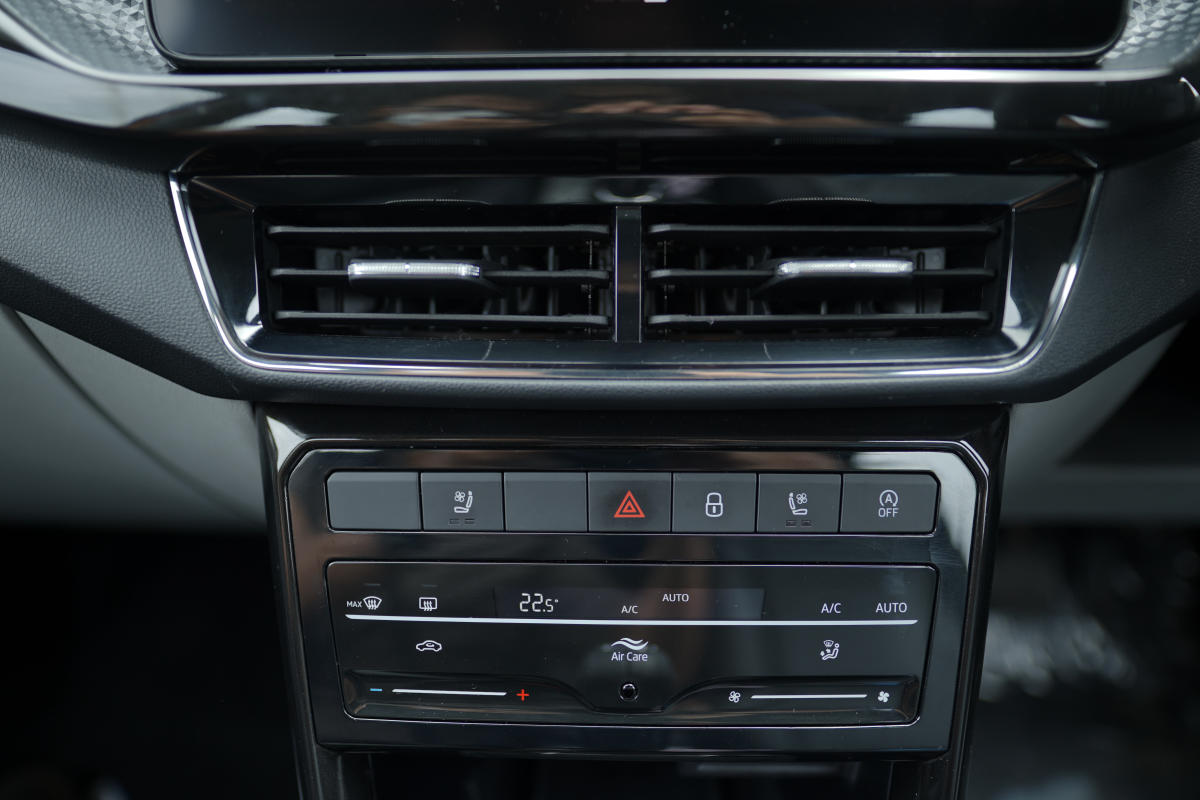 The car comes with ample features including a 6-speaker Skoda music system, wireless phone charging and ventilated seats at the front. The car gets an electric sunroof but misses out on a panoramic one, which will be seen in the upcoming Volkswagen Taigun.

Now, at the back, is where your family might spend most of their time and all-in-all it’s a good place to be. For reference, I am 5 foot 6 and as you can see I have plenty of knee room and headroom as well. Anyone measuring up to 6 feet can be seater comfortably but any taller and it will be a cramp. Skoda has done a commendable job in almost flattening out the central tunnel which means three passengers can be seated comfortably. There are plenty of practical features as well. For instance, you get two rear AC vents and a pair of C-type charging ports and a central armrest that has two-cupholders as well. Now the cabin also has little nuggets of thoughtfulness like a ticket holder on the A-Pillar and an extra pocket on the rear seat pocket to keep your phone.

Now the car that we got to drive was the top-rung Style variant that comes with a 1.5-litre TSI engine that outputs 150 PS and 250Nm of torque. While we drove the slick-shifting 7-speed DSG, the car also gets a 6-speed manual transmission. The engine, to say the least, is of a rev-happy nature that finds a common ground between a city-oriented practical one and a performance-oriented one that puts a grin on your face. While the 7-Speed DSG transmission did have a slight rubber-band effect at slow speeds, this was completely flattened out once the car picked up momentum. 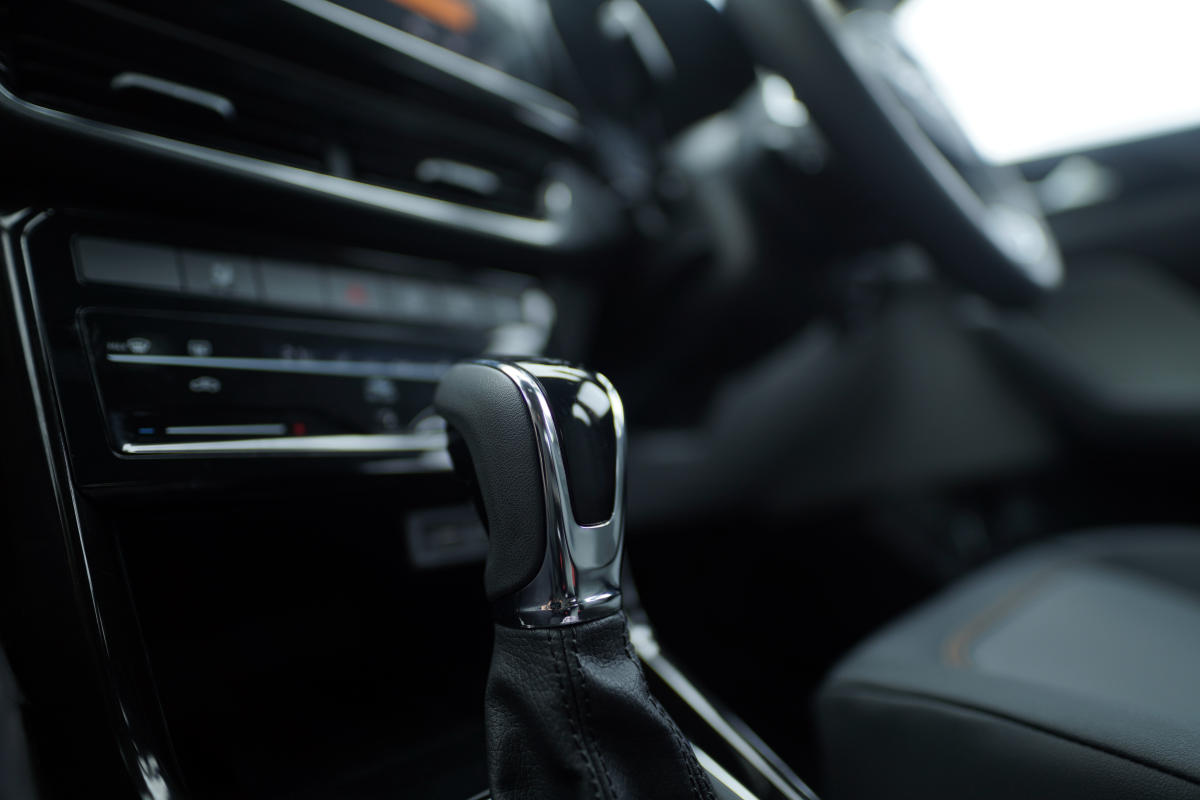 Apart from the 1.5-litre unit, there is also a 1.0-litre TSI engine that delivers 115PS and 178Nm of torque. And for this, you can choose between a 6-speed manual and a 6-speed automatic transmission unit.

In terms of driving comfort, the car gets suspensions that are set up on a slightly stiffer side. However, at higher speeds even deeper undulations went unnoticed. The steering of the Kushaq is on the lighter side. While this does make daily city commutes an easy affair, it falls short on confidence during spirited driving that involves sharp turns at high speeds.

Now, the Skoda Kushaq comes with disc brakes at the front and drum brakes at the rear. On the off chance that it might sound inadequate, it is safe to say that the car had ample stopping power that inspires confidence.

For the Kushaq, Skoda has put safety quite high on the priority list. The car gets 6 airbags and safety features like a Multi-collision Braking system, a tyre pressure monitoring system and optional, Hill-Hold Control. It also gets ISOFIX anchors and top tether anchor points to safely secure child seats, automatic Rain sensing wipers along with Sensors and a rear-view camera.

So in conclusion, it is quite safe to say that the competition in the mid-size SUV segment just got a whole lot interesting. After driving the Kushaq I can say that the car has enough firepower to challenge its rivals and since it is 95 per cent localized Skoda is expected to price the car quite aggressively. Now we expect the car to be in the ballpark of somewhere between 10 to 15 lakh and if you are looking for a car in that price range, there is no reason to look away from this.