Could the Suzuki Intruder 150 be the 150cc segment cruiser motorcycle to go for? We find out in our first ride review in Lavasa.

Manav Sinha
Suzuki motorcycles have been out of action lately when it comes to launching new motorcycles into the Indian market. To give you a perspective, the last motorcycle launch by Suzuki was in the form of the Suzuki Gixxer which was launched all the way back in 2014! Regardless, the Gixxer has been a success and has managed to carve a space of itself in the 150cc segment and the reason is simple – it is a great motorcycle.

Now, Suzuki has come out with an all-new motorcycle which is a culmination of several, rather very interesting elements. First and the biggest one is the ‘Intruder’ nametag which gained popularity from Suzuki M1800 Intruder – a 1800cc beast of a cruiser. This name tag has now been put to a 150cc engine, which is, based on the Gixxer.

The result is the Suzuki Intruder 150. How well does that combination work out to be? We find out.

We had a chance to ride the Suzuki motorcycles called us to Lavasa which is arguably one of the best roads to ride a motorcycle at in India. The roads of Lavasa are filled with inclines, declines, twists and turns – enough to test the mettle of any motorcycle.

But before we get to the ride quality, let’s start with the looks. While the stance of the motorcycle may fool you into thinking that the intruder 150 is a lazy machine, the reality is quite opposite. It is powered by the exact same engine as the Gixxer 150, which means the 155cc engine delivers around 15 PS of power and 14 Nm of torque and comes mated to a 5-speed transmission. While the engine’s state of tune remains the same, the gearbox ratio has been tuned for more cruiser-like riding. There’s also a bigger airbox on the Intruder 150, as compared to the Gixxer, which helps it carry around all that mass more efficiently. The chassis has been modified, the suspension has been re-tuned and the swingarm is longer than before. What all this translates into is a motorcycle that is very capable of tackling corners and is a confidence inspiring bike. The riding geometry is much more relaxed and the high handlebar means you don’t have to reach out very far either. The seats are wide and comfortable making it fit for the everyday commute as well as those weekend getaways. That’s not it, the gearbox is smooth, the engine is refined and the brakes on the Intruder 150 are progressive and provide great feedback with ample bite.

Oh, and there’s ABS on offer too! Therefore, overall, the Intruder 150 left us impressed when it came to the riding experience. 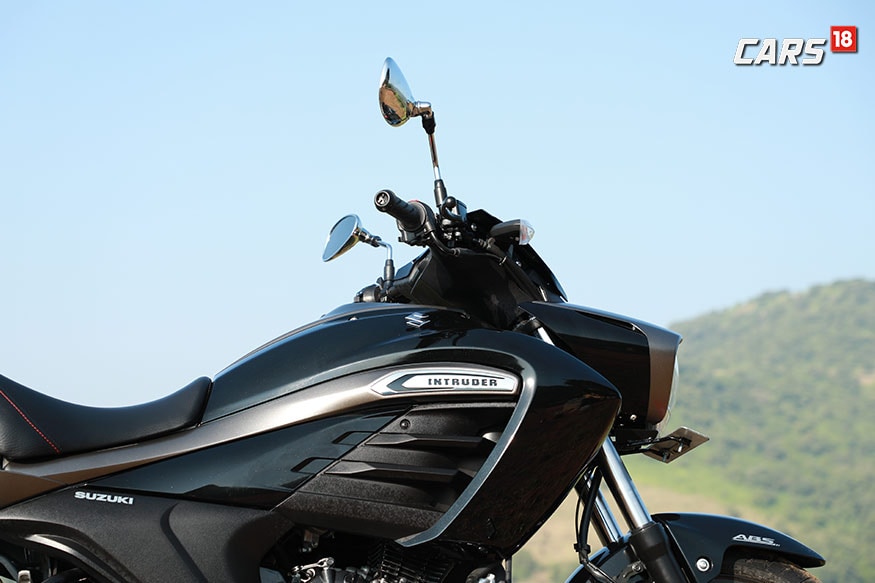 In terms of design, the biggest attraction would be those large headlamps which are clearly inspired by the 1800cc Intruder. There is a subtle use of chrome and thankfully, the bike does not go overboard with it. As a whole, the motorcycle manages to give a big bike feel and that’s a great thing. Having said that, the Intruder 150 looks better when you see it in reality than what it does in pictures.

When you look at the bike from the front, the design looks attractive but while looks are a subjective matter, for us, the Intruder’s rear section felt a bit awkward. Especially when we looked at it from the sides. In short, it seemed that the muscular Intruder has kind of skipped leg day, because the tyres seemed too slim for a bike this size. Don’t get us wrong, though, the tyres aren’t small. The Intruder gets 17-inch wheels both front and back and despite having a large 140 section tyre at the back, the huge dual exhausts and the large rear panel ends up making the tyre seem a bit small. That’s not it, the high mounted handlebar seems a bit weird when you look at it from the back and there’s an oddly shaped panel on top of the headlights which also houses the ignition port. From far off, though, the rear LED tail lights do make the bike feel premium and love it or hate it, you just can’t ignore the Intruder 150. And let’s not forget, the riding characteristics of the bike are just so good, that it will make you forget anything that you don’t like, if there’s anything like that.

So to sum it up, the intruder 150 is definitely a very interesting motorcycle. It rides well, has a good engine and the only thing you need to consider is if you're fine with the way it looks. If that suits your taste, then the intruder 150 is indeed a very good deal.