The Suzuki V-Strom 650 XT ABS is aiming to be a practical, versatile and value for money motorcycle and not a purpose-built bank-breaking machine. And that it does.

One of the most happening and talked about segments in the Indian motorcycle market right now is the middleweight Adventure Tourer segment. More and more people are shifting towards them as these motorcycles not only offer performance at par with other middleweight capacity motorcycles but offer that with unmatched versatility. You can do your regular early morning rides on them, escape for a weekend getaway and hit the highways and in case you feel like making things interesting, you can keep going where the road stops and can indulge in some off-roading. And now, Suzuki Motorcycles India has decided to stir things up by offering the Suzuki V-Strom 650 XT ABS in India at a price tag of Rs 7.46 lakh (ex-showroom, Delhi). We spend a day with the motorcycle and here’s what we think about it.

Right from the moment when you look at this motorcycle, it will catch your attention and the reason is that the V-Strom manages to stand out of the crowd by being a rather simple design. There’s nothing that is over the top, too aggressive or too loud. The V Strom just looks the business and that is refreshing. Yes, the vertical headlamps are a bit polarising and yes we do wish they were LEDs, but after some time, they grow on you and start to look better. Of course, there’s the pointy beak as well which gives the V-Strom some character. 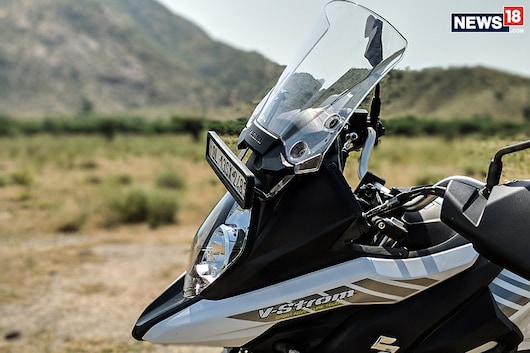 But there’s so much more to this motorcycle than just looks and judging it just by its appearance would be a mistake. You have to ride the motorcycle in order to appreciate one of the best things about it, which are, ergonomics. The rider sits upright and it has to be one of the most comfortable motorcycles to ride while standing on the footpegs, something that you would end up doing on a motorcycle like this. The fuel tank is slim and makes it easy to grip the motorcycle while off-roading and while riding on regular roads as well. And talking about riding, well, there is one big factor that helps its case. As we have noticed with most of the Suzuki Motorcycles, they get their engines right. And, it is a similar case with the V-Strom 650 as well. Powering the V Strom is a 645cc liquid-cooled V-twin engine that comes with a 6-speed transmission and makes 70 hp and 62 Nm of torque. It is best ridden at the mid-range of the RPM band as when you go past 6000 RPM, the vibrations begin to become more prominent. So, just ride it with a calm hand and you won’t have anything to complain about. That’s not it, the throttle response on the V Strom is pretty much telepathic and it never catches you by surprise. The seats on offer are comfortable for you to be on pretty much all day and the wind deflector can be adjusted to three height levels. 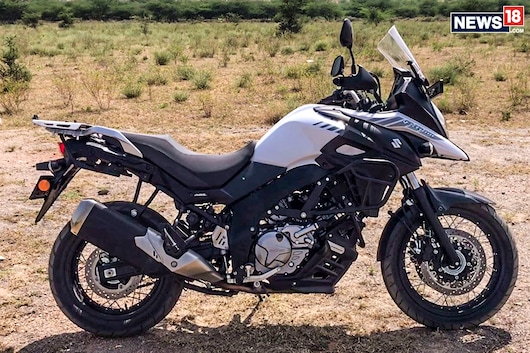 We had it all the way up but still wished it was a bit taller as the wind was not being deflected completely off of the rider. As for the suspension, it is plush and soaks up undulations and potholes with ease and it feels good when you are doing soft off-roading. The rear suspension preload is adjustable, which means, you can alter the ride quality based on the luggage on board and whether you have a pillion or not. Since it is the XT variant that has made its way to India, it does get underbelly protection and spoked wheels. To be specific, the front wheels are 19-inches in size the rear gets 17-inch wheels – meant to make it better at off-roading. What doesn’t help its case, though, are the road biased tyres. So, if you are planning to do proper off-roading with this, you would need to change those tyres. But in case hard-core off-roading is not your thing, then, you wouldn’t want to change anything else.

And there’s more. The Suzuki V-Strom 650 XT gets ABS which cannot be switched off and there’s a two-stage traction control system which can be turned off. The best part, though, has to be the Low RPM-assist, which means, riding in traffic is just a bit easier as it makes stalling the motorcycle in first gear almost impossible.

The 835mm seat height can be reduced by 20mm using an accessory seat for shorter riders and Suzuki is offering a 12V power socket on the motorcycle as standard. And I have to say, the stock rear view mirrors provide excellent visibility and feel like they have been taken right out of a car and little things like these make the V-Strom such a delightful package as a whole. It pretty much is complete in every way and can be made turned into a proper off-roader as well with only minor changes required. As it stands though, the V-Strom 650 is a motorcycle that we can ride for days on the highway.

To wrap up it all up, after riding the V-Strom 650 for about 400 kilometres in a day, we have to say that we are left impressed and there were hardly any instances where the V-Strom left us wanting for more. Yes, what we mostly did was highway riding and a little bit of off-roading. What remains to be seen is how this motorcycle performs in city conditions but as of now, if you’re looking for a middleweight Adventure Tourer, then you simply cannot miss out on the Suzuki V-Strom 650 XT ABS.