Tata Harrier vs Jeep Compass 4x4 Comparison Review: Which is the Better SUV?

Tata Harrier and Jeep Compass are two such SUVs that have managed to create a lot of interest around them in a really short time. We put them head to head to find out which is the SUV you should buy.

In the ever so popular SUV space in India, the Jeep Compass has managed to create a unique identity for itself by offering a long list of features and a premium build quality. So much so that this car has practically changed around the fortunes for Jeep in India. Now though, Tata has come out with the harrier which competes in the same space but has been priced a little bit differently. But which is the SUV right for you? Let’s going to find out.

Starting off with the Jeep Compass, the SUV looks aggressive and sharp. The key highlights include the iconic seven-slat grille that is instantly recognisable and the squared off wheel arches make it look tough. Then, there’s also the sharp shoulder line, the chiselled bonnet and clever use of chrome like on the lower lip, the fog lamp housing and along the window line – all of which make the car stand out. Being the Limited Plus variant, the Compass also gets huge 18-inch alloy wheels which look fantastic and the wheels overall fill the wheel arches nicely. Overall, it is the typical boxy SUV that we all have come to expect from an SUV. 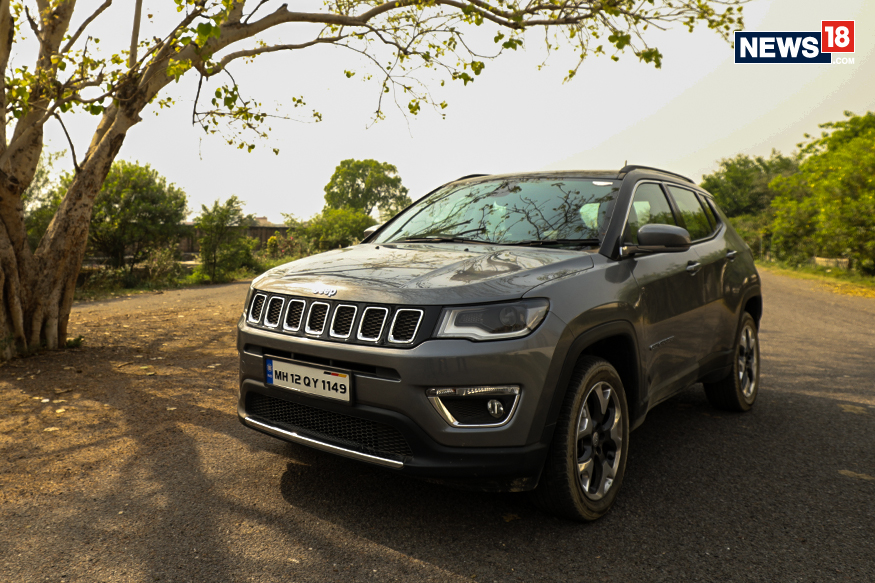 But as good as it may be, the moment you place both these cars next to each other, the difference in size is clearly visible. The Tata Harrier is bigger than the Jeep Compass in every single way. It is taller, it is wider, has a longer wheelbase and is over a massive 200mm longer than the Compass. Now while looks are a subjective matter, for me it was the Harrier that carries the look of a proper big-sized SUV. And that’s due to several design elements like the sharp Daytime Running Lights which are definitely a head turner and those along with large headlamp unit makes the Harrier look bold and sporty at the same time.

At the back, the layered tail section with the large spoiler makes the car look distinctive and I particularly loved the blacked out tail lights and how a little bit of body cladding also makes it to the boot lid. The only thing that I am not a big fan of are the wheels, the Harrier can take a cue from the Jeep in this department as that would just make the Harrier even more impressive. But, without a doubt, in terms of looks, the Harrier takes the cake.

Now coming to the interiors, the Jeep Compass looks drool worthy with that black and white colour combination but that could ask for a lot of maintenance given the dusty Indian conditions. However, the stand out feature is just how well everything feels in the Compass. All the elements have a great build quality and are well put together too. And the Compass also offers fantastic driving ergonomics and the highlight has to be 8-way adjustable electronic seats that also come with a memory function, something that the Harrier doesn’t get, just like the dual zone climate control as well which is a welcome feature in the compass.

And the variant we were driving of the Compass comes with an 8.4-inch touchscreen infotainment system which has great touch response, is smooth to operate and comes with Apple CarPlay and Android Auto on offer, whereas the Harrier only makes do with Android Auto. However, what I am not a fan of are blank switches on the steering wheel. Last but not least, the Compass also comes with an electronic parking brake. When you are at the back seat, you have a decent amount of knee-room, leg-room and headroom on offer. And what’s really going for it, though, is the big sunroof that makes everything a little bit better. And yes, it is a huge panoramic sunroof and if you are someone who likes your sunroofs, you’ll love this one.

Now coming to the interiors of the Tata Harrier, well, it feels like you are seated in a car that belongs to a segment above! The design of the cabin is fantastic and while everything is plasticky, it does not feel cheap. The feel of elements like the armrest on the doors feel great and while there are several shades of colours used in the cabin, nothing feels out of place. And let’s not forget, the bigger dimensions of the Harrier really begin to be felt from inside the car as the Harrier feels a lot roomier.

The highlight is the touchscreen infotainment system which at 8.8 inches is bigger than the one in the Compass and this system comes with 8 speakers and a sub-woofer, as opposed to 6 speakers in the Compass, not only makes for a better audio experience but the best one in its segment. However, the touchscreen itself is not as responsive as the Compass. Where the Harrier does quickly makeup is with the instrument cluster which feels a lot more modern and cleaner than the one on the Compass. But still, it’s not all perfect inside the Harrier as the driving ergonomics are not that good and also, while the fancy handbrake lever feels fancy for the first few times, it does end up in making you miss the e-brake in the compass.

And yes, finding the USB port is simply a nightmare in the Harrier. What’s not, is the rear seat which is fantastic. At the back seat of the Tata Harrier, I really have to say that I’m massively impressed by the huge amount of space that I have. These huge glass panels make everything feel airy, there’s a huge amount of knee-room, leg-room and shoulder room on offer, you can easily have three people sit abreast on this seat and overall it’s a great place to be in. What I do miss, though, is a sunroof.

The Harrier also scores in terms of the boot space which, despite being marginally smaller than the Compass is a bit more practical thanks to its wide shape and lower height. Now when it comes to the drivetrain options for both these cars, well the variants that we drove, both of them come with a 2.0-litre, 4-cylinder diesel engine that comes with a 6-speed manual gearbox. Now both of them might sound quite similar but they are quite different.

Now all this while the size of the Compass has been working against it but in this department, it helps the Compass is a big way. The car is just more compact which means lesser body roll and better agility. The driving position is a commanding one and it is just easier to drive around in everyday traffic conditions. Also, while both these cars make identical torque figures, the Compass makes more power at 173 Hp which, coupled with the fact that the Compass weighs less, makes it a lot quicker than the Harrier.

Also, the stiff chassis makes for great cornering stability and it is a four-wheel drive system as opposed to the Harrier being just a front-wheel drive SUV. Yes, the Harrier gets a terrain response system which helps remap several things in the car to be better suited for off-roading, but it simply doesn’t inspire the confidence off-road that the Compass does, which is just a more capable SUV. It also gets disc brakes on all four wheels, the Harrier doesn’t, and if you are someone who loves to drive, then you will absolutely fall in love with the gear knob on the Compass. What doesn’t work in Compass’s favour is that the clutch and steering wheel feels a bit heavy when you are in choc-o-bloc traffic. And that’s not it, the Compass also gets a bit audible at high RPMs inside the cabin making it feel stressed even when it isn’t.

The Harrier, on the other hand, gets better sound insulation and the light clutch and steering wheel feels so much better in traffic. However, the feedback from the steering isn’t all that nice as it doesn’t weigh up enough at highway speeds and the humongous outside rear view mirrors create too much wind noise and sort of a blind spot for the driver. I never thought I’ll say this, but I think they are too big. And also, the inside rear view mirror is not an auto-dimming one, unlike the one in the Jeep Compass, which is a bit of a surprise. Anyway, what the Harrier is good at is eating up bad patches of roads at whatever speeds you may be carrying. A bit of it does filter through to the cabin but the car never feels unsettled or out of its comfort zone. And yes, it also comes with cruise control, which the Jeep doesn’t, making it a lot more convenient on the highway.

All in all, the Harrier is good to drive but it can’t match up to the dynamics that the Jeep Compass offers.

But the biggest trump card that the Harrier has over the Jeep Compass pretty much settles the debate – which is the price. Basically, the price of the Tata Harrier ends where the Jeep Compass begins. To give you an idea the price difference between base variants of the two is about Rs 3 lakh and if you were to compare the top-spec variants, the one we tested, the difference goes up to a massive 7 lakh rupees! That’s not it, the Harrier is also one of the most aggressively priced cars in the segment which makes it great back for buck offer. So at the end of the day, if I were, to sum up my experiences of both these SUVs then I have to say that there were a few things that I wish the Tata Harrier had. But then again, when it comes down to the pricing, I simply cannot justify spending the extra premium just for that Jeep name tag. So then, the Tata Harrier is the better value for money car and the one that we will go for.