Tata Motors, in my opinion, is one of those few Indian auto manufacturers who doesn't shy away from innovations. And Right now, at this very moment, Tata is the only Indian manufacturer to develop an in-house electric SUV. Based on the Nexon compact SUV, Tata’s first electric SUV is called the Tata Nexon Electric. And before we start talking about the EV itself, we need to understand the need of this product. If you have to see the Indian automotive market as a whole, small SUVs have gained a lot of popularity in recent years. The first proper electric car we saw in India was the Hyundai Kona, followed by the MG ZS, both of which are the electric SUVs. And so, it made sense for Tata Motors to come up with an all-electric SUV. What they did differently is, manufacture the car in-house, which will impact the pricing, and we expect to be around Rs 15 Lakhs. Nevertheless, we recently got the chance to test drive the car at the Tata’s home – Pune. Here’s our Tata Nexon Electric First Drive Review:

The very first thing you will notice in the Tata Nexon Electric is the design itself. The very fact that Pratap Bose, the design head of Tata Motors was at the helm of affairs, raised our hopes with this SUV, and what a brilliant design he has produced. While the EV is essentially a Nexon with battery, it wears a new design that will also serve as a design for the upcoming Nexon facelift. You see many interesting elements scattered throughout the car making it look vibracious.

Upfront is the new black gloss grille panel replacing a traditional air mesh grille, projector headlamps, and a large fog light enclosure. The lower lip has tri arrow elements in the blue shade to highlight the electric power train. The same blue touch can be found throughout the body right from the grille line to fog lamps, shoulder line, and a large tailgate plate. There's a white coloured roof that, which for me, didn't gel well with the overall scheme of things. Having said that, the large wheel arches and skid plates along with a raised front face makes the Nexon the best looking electric SUV in India. 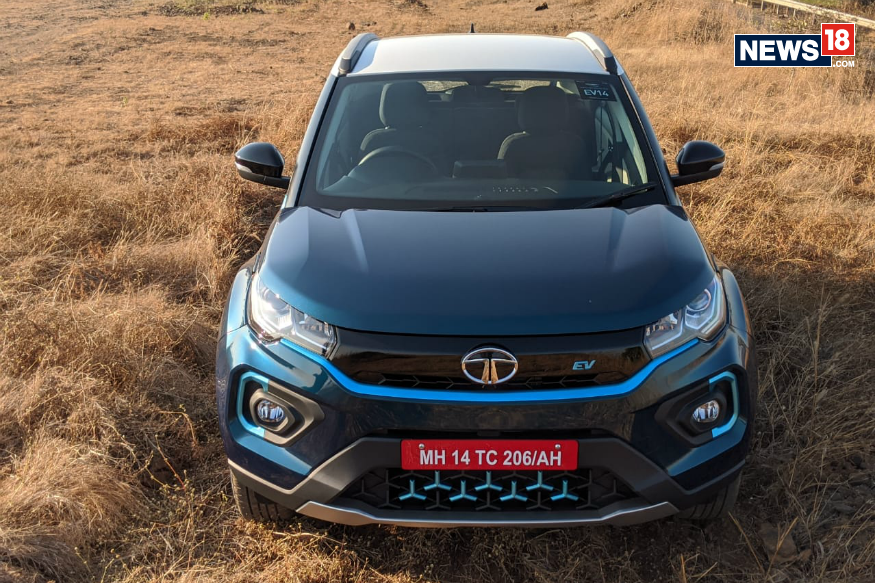 The good looking exterior is well complemented by the dual-tone cabin. There's a large gloss black panel bifurcating the dual-tone dashboard and is a fingerprint magnet. Carrying forward the Nexon design is a 7-inch dashtop mounted infotainment system. However, the instrument cluster now gets a panel sourced from the Altroz. It's a digital Plus analog screen that looks good. The biggest downside, in my mind, is the positioning of range information. It hides behind the steering. For an EV owner, the range is the biggest concern, and Tata may want to look at redesigning the interface. The cluster also displays regenerative braking and charging information once it is on charging.

Like the exterior, the blue theme is carried inside the cabin on the AC vents and a large central tunnel pocket. Speaking of pocket, the Nexon electric is as practical and as spacious as the Nexon. The traditional gear lever has been replaced by a rotary knob lever. There are a lot of clever storage spaces throughout the cabin. For me, however, the glovebox door that converts into a tray to hold cups is the biggest design innovation, as we have seen with the Nexon as well. The space is adequate to seat five full-grown adults with ease. The seats are nice and soft with blue stitching adding to the theme. While we drove the XZ+ variant with fabric seats, the XZ+ Lux variant gets leatherette seats. The boot is also large and deep. The boot opening button could have been better though. Features wise, the Nexon EV gets a sunroof, auto headlights and auto wipers in the top-spec model. There's also a wearable remote key. While there are Apple Carplay and Android Auto, connectivity is not limited to them. Tata is offering the Zee connect app with eSim connectivity and connected 35 features. The app can be used to know the range of the SUV, geofencing and even remotely switch on the AC.

The Tata Nexon electric gets a lithium-ion battery pack capable of pushing the car for more than 300 km in a single charge. The battery can be fully charged in under 8 hours using a complimentary home mounted AC charger which Tata will provide. Along with the wall-mounted charger, Tata is also offering a 15-ampere power cable that can be used at any place with the necessary power socket. The 30.2 kwh battery pack with IP67 rating can also be charged using a DC charger that can top it up upto 80% battery in 1 hour. The electric motor is rated at 129 ps and 245 Nm. Tata Nexon is not the company's first electric vehicle which means the brand knows a thing or two about the electric power train. They have utilized their past experiences to carve out an electric power train that mimics an ICE engine, which means transition for a user won't be difficult. Also, the battery pack is water-cooled to counter the high temperature we encounter in our country.

The floor-mounted battery pack increases the weight by upto 50 kgs, but improves the centre of gravity. Also, our past experience with other EVs has proved the battery pack to be disastrous for the suspension setup. The Tata Nexon electric is an anomaly though. The suspension behaves just like a regular car and eats most of the potholes, providing a very good ride quality. The steering is nice to hold and gives ample feedback and is tuned well for city driving. The MRF wanderer low resistance tyres reduce the tyre noise and combined with the electric power train, the NVH levels become incredibly refined. The fun part of driving an electric car is the instant torque you get, which makes it feel like a performance car, for whatever small amount of time. However, to enhance the experience, there's a Sports mode that improves the throttle input. This, however, comes at a cost. Using the Sports mode will quickly dry your battery and you have to be careful with any misadventures you may plan in this SUV. Although Tata has not revealed the pricing for the Nexon Electric, I believe it will be its biggest USP. Reason being, Tata Nexon Electric is Made-in-India unlike the other electric SUVs sold in the Indian market, most of which are imports, raising their pricing considerably. And then there are factors like a 300+ km driving range, impeccable design and good driving dynamics. If you're planning to buy an electric SUV in the near future, Tata Nexon Electric is the car to go for.