The Tiago is undoubtedly the best Tata yet and one of the best value for money hatchbacks in India right now.

When you think of Tata Motors then chances are that the first car that comes to your mind is the Indica and there’s a good reason for that – it is the most popular Tata after all. But things have changed now as Tata wants to go global, and they are the owners of Jaguar Land Rover after all.

The result of this ambitious plan is the Tata Tiago, which promises to be the first car that will come to your mind, whenever you think of Tata Motors, as soon as you start driving it.

That’s a lot to live up to, especially if you consider the already crowded segment that the Tiago will be competing in. We tested out the top-end ‘XZ’ diesel variant of the Tiago to find out how it fares.

One of the first things that Indian buyers look for in a car is the way it looks and the Tiago definitely looks good. And if you think about it, ‘good’ is better than ‘wow’ because after a couple of years or so, ‘wow’ goes on to become ‘okay’, whereas the Tiago’s design will keep growing on you.

The reason behind that is the new design language that Tata Motors have adopted, which is called ‘Impact’. There is no over the top aggression in the design approach, no overuse of chrome or body cladding and yet, even with neat and clean lines, the Tiago manages to create a recall value in your mind which helps in making it stand out of the crowd. There’s plenty of attention to details as well, like the smoked 3D headlamps which carry on the grille’s line and connects it to the bumper line. The next thing to do after you are done checking out the exteriors is to hop inside and the moment you do that, you are greeted by a surprisingly good cabin. And dare I say, it will make you think for a second that it has been designed by Europeans or Koreans, who are the masters when it comes to designing interiors. There are several shades used inside the cabin – chrome, piano black, a two-tone dashboard and silver accents – but they are all used in the right places and in the right amount. Tata Tiago from the back. (Photo: Siddharth Safaya/News18.com)

Whereas the design of the cabin is great, the quality of materials used is decent. There are several compartment spaces too, 22 to be exact, and all four doors can hold a 1-litre bottle. The seat and steering are height adjustable and the boot space is a generous 242 litres. Under the hood, it is powered by a 3-cylinder 1047cc Revotorq diesel engine that delivers 69 horsepower and 140 Nm of torque, that comes mated to a 5-speed transmission. There is the option of 1.2-litre petrol engine as well. 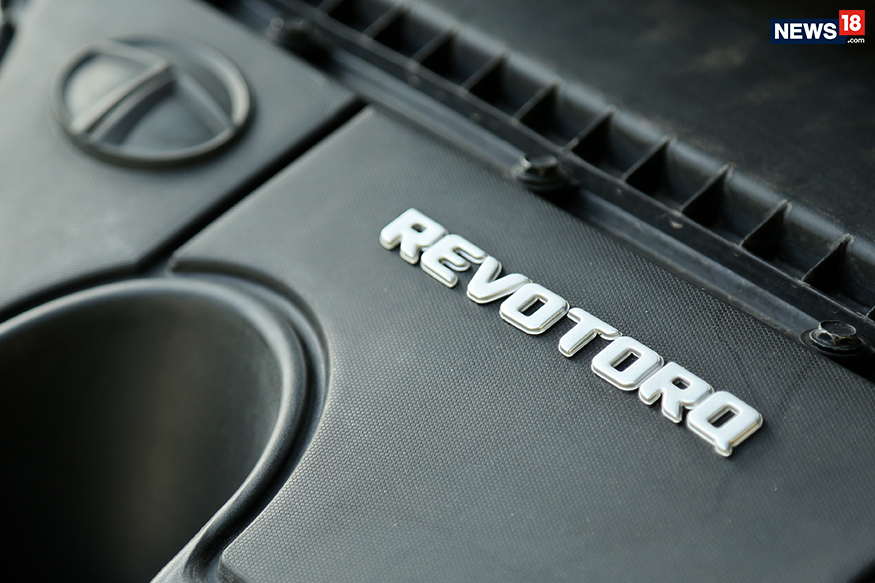 We tested the top-end 'XZ' diesel variant of the Tata Tiago with the Revotorq engine. (Photo: Siddharth Safaya/News18.com)

Another aspect that holds significance for the Indian buyer is mileage and the Tiago delivered an impressive 21 km/l with the AC on at all times on city roads, in our testing of over 1000 kilometres. This is largely due to the dual-driving modes that you get – ‘Eco’ for better economy and ‘City’ for a slightly better engine response. The car is loaded with features like dual airbags at the front, ABS with EBD and the wonderful 8-speaker Connectnext infotainment system by Harman, which means the car has one of the best audio experience in its segment. It supports AUX, USB, Bluetooth and will also give turn-by-turn navigation via the NaviMaps app on your smartphone. Tall drivers won’t have a problem inside the cabin either as there is plenty of headroom, shoulder room and leg-room for all the occupants in the car.

The engine and the suspension offer a decent ride quality. It’s not the best in class, but you won’t complain either. What we didn’t really like, though, was the engine noise that creeps inside the cabin. The noise makes the engine feel strained at high RPMs even though the engine isn’t.

The AC isn’t very effective either and is a bit noisy too. It takes its own sweet time to cool up the cabin and that can be a problem during the extremely hot days that India is known for. The problem is that when the audio has been ‘muted’ and the car is put in reverse, you’ll hear the parking sensors just fine. But, when you put the gear lever back to neutral or in any gear, the ‘mute’ is overridden and the audio level is raised back to what it was before it was muted. Since the speakers are good and loud, it can become irritating, especially if you park your car every day by reversing into the parking spot.

If you consider the engine capacity and the base price tag of the Tiago then you are looking at competitors like the Maruti Suzuki Alto K10 which, interestingly, has a base price which is almost Rs 5,000 higher (ex-showroom, Delhi) than the base Tiago petrol variant. But when you look at what all the Tiago is offering in terms of features in the higher variants, then it competes with the likes of the Ford Figo and the Hyundai Grand i10.

The starting price for the diesel range of Tata Tiago is at Rs 3.95 lakh (ex-showroom, Delhi).

At the end of the day, it delivers on all the promises and the expectations. It is undoubtedly the best Tata yet and will go on to become the first car that you would think of when you think about Tata Motors in the coming years. It is right there with one of the best value for money hatchbacks on sale in India right now and should definitely be considered before you make a purchase in this segment.

It looks good, is loaded to the brim with features, high on practicality and delivers great mileage as well. And given its starting price tag and the segment it is in, what more could you want?