The Ferrari SF90 brings a staggering output from a new-age V8 hybrid powertrain. And that's not the only thing that makes it special.

Ferrari’s V8 bloodline has given us some of the most phenomenal monikers in the history of performance cars. And kicking things up a notch is the new SF90 Stradale that now stands as the most powerful Ferrari ever. From a V8 you ask? Absolutely yes.

Before we dive into the juicy details of the new Stradale, a lesson on its ethos is in order. The very idea of a hybridised V8 that operates in the borderline four-digit power figure is not just to bring about a revolution into its royal bloodline, but also to embrace the tightening emission norms that will soon hunt down most of our favourite good ol’ big engines.

But keep those norms aside, and this is still the fastest Ferrari to be ever produced. 986-bhp fast to be precise. The numbers, however, are not the wizardry of just the V8. The V8 alone produces around 769bhp and the remaining 206bhp comes from the tripartite electric motors situated on either axle. If that doesn’t tingle your senses, the fact that the new SF90 also derives a few of its mechanicals from its F1 cousins, will.

The folks at Maranello might have started with the same F154 twin-turbo V8, but the changes are such that technical director Michael Leiters describes it as a ‘totally new architecture, with only minor parts carried over’ The capacity of the traditional V8 has been bumped up from 3902cc to 3990cc, welcoming a larger bore of 88mm. This is married to a completely redesigned intake and exhaust. Additionally, the cylinder head is narrower with an all-new central injector running 350bar. The new exhaust sits higher – and exits above the rear bumper. This means that the engine sits about 50mm lower in the chassis that brings about a reduced centre of gravity. All of this brings about 769bhp to the table, the rest of which comes from a very potent hybrid system.

Speaking of which, the hybrid system on the SF90 Stradale ships with a 7.9kWh lithium-ion battery that sends power to three electric motors, two of which are at the front and one at the back. To put things into perspective, Ferrari claims that with the ICE turned off, the car can reach up to a top speed of 135kph. Ferrari’s control logic manages the power flows and anticipates if the driver is feeling holy or hedonistic, splitting the power across four driving modes controlled by the steering wheel mounted eManettino. The self-explanatory ‘eDrive’ uses just the front axle and runs purely on electric power for a saintly 24 kilometres. The ‘Hybrid’ mode is the car’s default setting that uses both the battery as well as ICE. ‘Performance’ keeps the engine running to charge the battery keeping it charged for the extra oomph. The ‘Qualify’ mode squeezes out everything out of every part of the powertrain, rinsing the three electric motors of their 162kW output.

The platform that underpins the new SF90 caters to the demands of the new hybrid powertrain and is a mix of carbon fibre and high strength aluminium for better torsional rigidity. At 1,570kg, the SF90 is no salad-dodger either, considering it accommodates about 270kg worth of gubbins inside. In addition to its weight, engineers at Ferrari has also promised impressive progress in terms of aero- and thermal dynamics. The rather spectacular and edgy bodywork puts down 390kg of downforce at 250 kmph and the engine has been placed lower for better airflow. In a nutshell, the whole rear section of this car is rather spectacular. 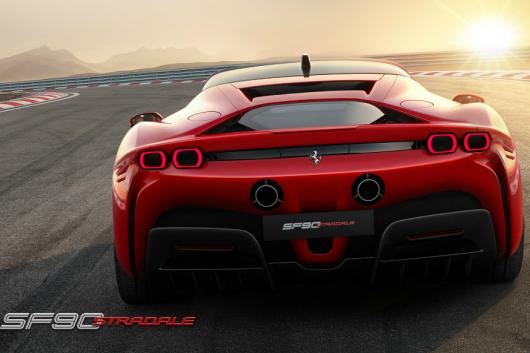 A part of its lauded aero feature is a twin-part rear wing that derives crucial lessons from the company’s experience with Drag Reduction System (DRS) in Formula One. A fixed element incorporates the middle brake light and is aligned to the mobile part in regular conditions. Ferrari’s patented ‘shut off Gurney’ system, which actually disappears into the body with the help of electric actuators, close the lower blown area and maximize downforce.

Speaking of the aforementioned gubbins, the new SF90’s Stradale comes with a 16-inch fully digital HD screen with a curved surface. This caters to the industry’s growing fad for ‘secret till lit’ obsession. With so much power to warp you into time-bending speeds, Ferrari wants you to keep your hands on the wheel. Hence, the steering-mounted touch-sensitive controls that won’t require one to take hands off the steering while driving.

Similar to most Ferraris, pictures of the new SF90 does not do justice to its beauty. And it's not just a car's aesthetics but also what like beneath the skin as the words of Enzo Ferrari, “When you buy a Ferrari, you pay for the engine and I’ll give you the rest of the car for free.”