Is the new Toyota Yaris a worthy rival to Honda City, Hyundai Verna and Maruti Suzuki Ciaz mid-size sedans? We find in our first drive review!

The Toyota Yaris attracted a lot of eyeballs at the recently concluded Auto Expo and is generating a lot of attention on the social media even before it is launched in India. The reasons for such attentions are the obvious ones – 1) It is the first mid-size sedan from the house of highly reliable Toyota Motors, 2) It will compete against the likes of Hyundai Verna, Maruti Suzuki Ciaz and Honda City, and 3) It has 12 first-in-class features. So basically, on the papers, the Toyota Yaris is already a worthy rival of the established and popular cars of this segment. But how good is it to drive and does it have what it takes to beat the segment leaders? We recently drove the car at the outskirts of Bengaluru to know the answer!

The Yaris is the first mid-size sedan from the house of highly-reliable Toyota Motors and be positioned between the Etios and the Corolla Altis. At the first glance itself, you will appreciate the premium touch to the design of the Yaris. The stretched back projector headlamps with LED line guiding at the front, bonnet lines and large grille makes it look stylish. The teardrop LED Fog Lamps gives it a distinctive look. Move to the side and you will see 15-inch alloy wheels, raised wheel arches and body lines making it look beefy. The rear resembles the old Corolla, with protruded tail lamps. In terms of the dimensions, the Yaris is wider than the rivals, but shorter in length. However, that doesn’t impact the overall cabin space. Toyota Yaris gets a wide grille and projector headlamps at the front. (Image: Arjit Garg/News18.com)

Talking of the cabin, the Yaris resembles the design language of the exiting Toyota products in India, in a good way of course. The dual tone cabin with beige upholstery and black dashboard, along with a glossy touch makes it look premium. There’s a lot of aluminum brushed elements throughout the cabin, like on the waterfall center console, steering wheel and air-con vents. The built quality of the cabin is something we have to appreciate and none of the elements feel out of the place. The leather-wrapped steering wheel feels good to hold and gets rotary steering-mounted controls. Toyota has worked a lot on the build quality as well and all you need to do is listen to the sound of the closing door to understand it better. 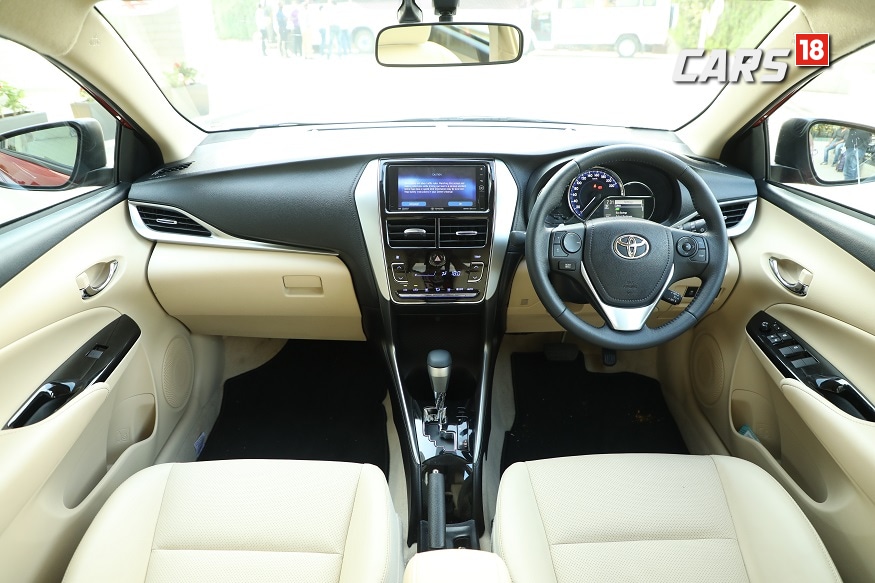 There are a lot of first-in-segment features, but the gesture control infotainment system is something which is usually seen on high-end luxury cars. Features like rear sunshade, power driver seats, automatic air-con unit, tyre pressure-monitoring system, reverse camera, Optitron Meter with TFT display, cruise control with paddle shifters, rain sensing wipers and smart entry, all add to it the luxury value. However, another selling point is the rear roof mounted AC vents with ambient illumination that adds to the desirability factor of the Yaris.

The cabin has generous space and smart touch like flat rear floor makes it comfortable for three adults to sit with ease. However, the front armrest is positioned in a way that the rear passenger at the centre will face some issues. The front seats offer generous under thigh support and side bolstering to make you comfortable while long drives. In terms of the practicality, there are 2 bottle holders in the front, 1 each on the 4 doors and a rear armrest with 2 cup holders. The boot is big enough with 476-litre of space and is deep with squarish design. Everything was good until Toyota decided not to offer a diesel engine in the Yaris. According to Toyota, they have done a lot of research and decided to go with only a petrol engine with 2 gearbox options. The 1.5-litre dual VVTi engine will produce 107 PS of power and 140 Nm of Torque. There are two gearbox to choose from – a 7-speed CVT gearbox and a 6-Speed manual gearbox. Toyota is claiming a figure of 17.1 kmpl in the manual and 17.8 kmpl in the CVT gearbox.

The biggest USP is that the Toyota is offering a 7-speed CVT gearbox right from the base version. While CVT gearboxes are known for their rubberband effect, the Toyota’s unit is tuned in a way that you don’t feel it much while pushing the car. In terms of driving, the initial acceleration feels lazy, with a lot of input from the driver, but once to pass that band, the Toyota Yaris is a delight to operate. Toyota Yaris is only offered with a petrol engine. (Image: Siddharth Safaya/News18.com)

The suspension is tuned in a way that you will sleep in the rear seats, without noticing the bumps and crevices on the road. The impeccably reduced NVH levels are also the game changer here. Handling wise, the Yaris feels balanced and no matter where you are driving, be it the highway or city roads, it will keep you planted on the road.

The Toyota Yaris is high on the Safety standards and right from the base version, the Toyota Yaris will get seven airbags including driver side knee airbag, which makes it the only car in the segment to offer these many airbags. Other safety features include all-wheel disc brakes that gives a sense of security at the high speed run, Hill-Start Assist, ABS, EBD and ESP. Just so you know, a similar-speced Yaris has been awarded five stars in the ASEAN NCAP crash test. For a country obsessed with the fuel efficiency, not offering a diesel engine is a bold move from Toyota and only time will tell how it goes among the buyers. For now, we are mighty impressed with the safety and gadgets on the Yaris, the way it looks and the overall drive quality. While the mileage is a bit less as compared to the rivals, if, and only if, Toyota plays it smart to price the Yaris competitively, it will be a sureshot winner in this segment.