Priced at Rs 14.1 lakh (ex-showroom, Delhi), the Thunderbird Storm has the largest production parallel-twin motorcycle engine in the world.

Triumph Motorcycles is known for creating some of the sweetest cruisers on the planet which look conventional and yet, feel modern to ride. One such cruiser in their line-up that’s available in India is the Thunderbird Storm, which at a price tag of Rs 14.1 lakh (ex-showroom, Delhi) gives the rider some serious bragging rights like owning the largest motorcycle parallel-twin production engine in the world. But is there more to this than what meets the eye? We find out.

The first thing that you will notice is the twin-headlamps at the front, which will remind you of Triumph’s Rocket-III, which has the largest production engine on a motorcycle in the world. The next thing that will catch your eye is the minimal use of chrome on the bike. Most of the chrome is on the exhaust pipes and the front handlebar, other than that, the bike sports an all-black look, which gives it a muscular stance.

The rear section of the bike carries forward the minimal design approach and looks clean, tidy and the wide tyre completes the look. Triumph Thunderbird Storm from the back. (Photo: Siddharth Safaya/News18.com)

The instrument cluster is mounted on the large 22-litre fuel tank and not on the handlebar, giving it a contemporary feel. In terms of the information it provides, there is an analogue speedometer with an integrated rev counter. The LCD panel inside the instrument cluster can be operated via a scroll button on the handlebars which lets you toggle between trip computers, fuel gauge, range and a clock. The star of the bike is that massive 1699 cc engine, with fuel injection. It delivers 97 horsepower and 156 Nm of torque, which is delivered as low as 2950 RPM. That is something that regular cruiser riders will love as it allows for lesser gear shifts and more hassle-free cruising.

Having such a large engine on board means that the motorcycle will need two things – a good heat dissipation system and a chassis to compliment all that power.

To tackle the first requirement, Triumph has fitted the engine with liquid cooling which does the job fairly well, unless you are stuck in bumper-to-bumper traffic for long durations. The vibrations are kept to a minimum with the twin balance shafts.

The chassis, though, is absolutely wonderful. Despite weighing 308 kilos (dry), the bike does not feel like it. It is surprisingly nimble and manoeuvrable once you start riding it and the fact that the rear suspension is preload adjustable, you have the option of fine-tuning the suspension based on whether there is a single rider or a pillion on board as well. Triumph Thunderbird Storm gets preload adjustable suspension at the back. (Photo: Siddharth Safaya/News18.com)

When it comes to stopping, the twin 310 mm discs at the front with Nissin brakes and the rear 310 mm single disc with Brembo brakes (with ABS) have good feedback and bite. Although, the rear ones are sharper and you will end up using them more as compared to the ones in the front. The Metzeler Marathon tyres give you the confidence to push the bike hard in corners.

The riding position is comfortable with front set footrests and a sweeping back handlebar, like any typical cruiser, and the low seat height of 700 mm means that even short riders will not have problems in planting their feet on the ground. 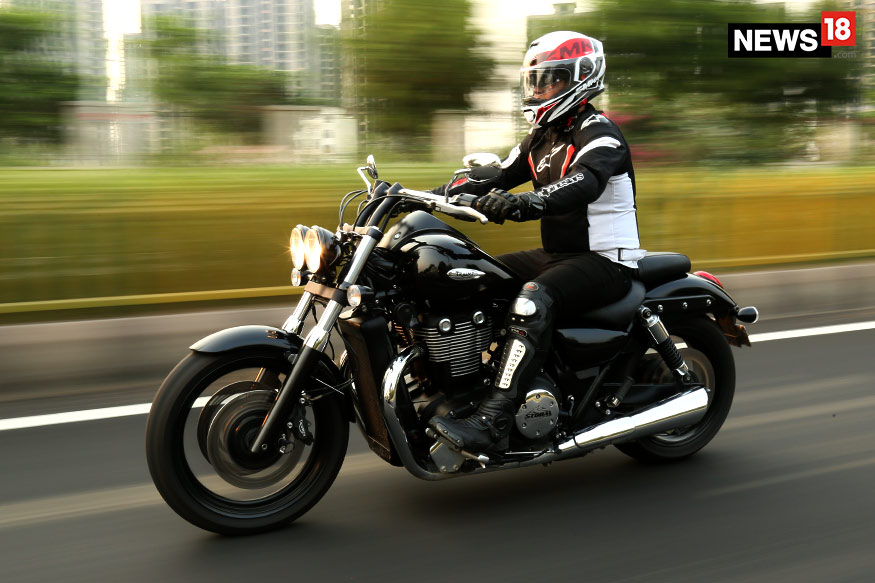 The 6-speed transmission on this wasn’t exceptionally good but it didn’t give us a chance to complain either. Unfortunately, such wasn’t the case when it came to the clutch lever which was painfully hard to operate and will definitely need some work if the bike has to be used for long distance riding or city commuting. We took the Thunderbird Storm for the Riders Music Festival ride as well and the clutch lever kept intruding in the otherwise pure cruising experience that the bike offers. While the low-seat height is a good thing, the ground clearance wasn’t all that impressive. The bike will scrape its belly when it comes across a bad section of the road. In most cases, though, it’ll be enough.

The popular saying – no replacement for displacement- seems to fit aptly in this scenario. The 1699 cc engine puts the Thunderbird storm in a league of its own. And given that there is the Thunderbird LT variant on offer as well, which offers all the chrome and accessories you would want at Rs 2.3 lakhs extra, is a win-win situation for Triumph.

There’s the Harley-Davidson Fat Boy too, but it is more expensive than the Storm.

Also Read: Review: Harley-Davidson Street 750 Is Your Ticket to Be Cool

Priced at Rs 14.1 lakh (ex-showroom, Delhi) the Triumph Thunderbird Storm is a fine piece of British engineering that leaves you with a smile. If a blacked-out, large capacity cruiser appeals to you and if you are spending this kind of money on a motorcycle, then chances are that you are looking for a bike that gives you presence on the road. If that’s the case, then the Thunderbird Storm is the bike for you.