Triumph Tiger 900 First Ride Review: GT, Rally and Everything 'Pro' in Between

The Triumph Tiger is arguably India’s favourite Adventure Tourer but it’s never been perfect. Up until now.

If you start looking for a middleweight Adventure Tourer then probably more than half of the recommendations that you would get will be for the Triumph Tiger. Many of those recommendations could come from people who own a Tiger or know someone who does. That’s pretty much how popular the Tiger is in the motorcycling community in India and is arguably the most popular choice among enthusiasts.

However, the stories that you would hear will not be all perfect, even if they do end up calling the Tiger a great motorcycle anyway. Now, Triumph has heard the feedback from its owners all across the world and has come with an all-new Tiger which now has the suffix of 900. But then again, no motorcycle is perfect. So has the Tiger improved? Well, to find that out, we were called to Morocco to have a go on new Tigers.

And what an experience it was! I spent two days in Morocco riding the new Tiger 900 and spent about 500 kilometres riding on the highway, on the twisties, nice B-roads and some wonderful off-road sections as well. However, let’s start off with the most important thing which is the new naming of the Tiger family. Gone are the XCA, XCX, XRX and all those letters that used to be there before. Now, the naming is quite simple.

But thing is, there is so much going on with both these motorcycles that they end up giving different riding experiences. So, before we get to what’s different between these two, let’s start with what’s the shared stuff. First, the drivetrain.

Triumph has pulled out all the stops to give the Tiger a vastly improved character and to do that, the biggest change comes from the way the drivetrain is mounted on the bike. It has been shifted down by 42mm, the oil sump is now smaller to make the engine more compact and still offer a fantastic ground clearance, and the entire unit is not tilted forward as well. That’s not it, the entire drivetrain is about 2.5 kilos lighter and a lot more compact. 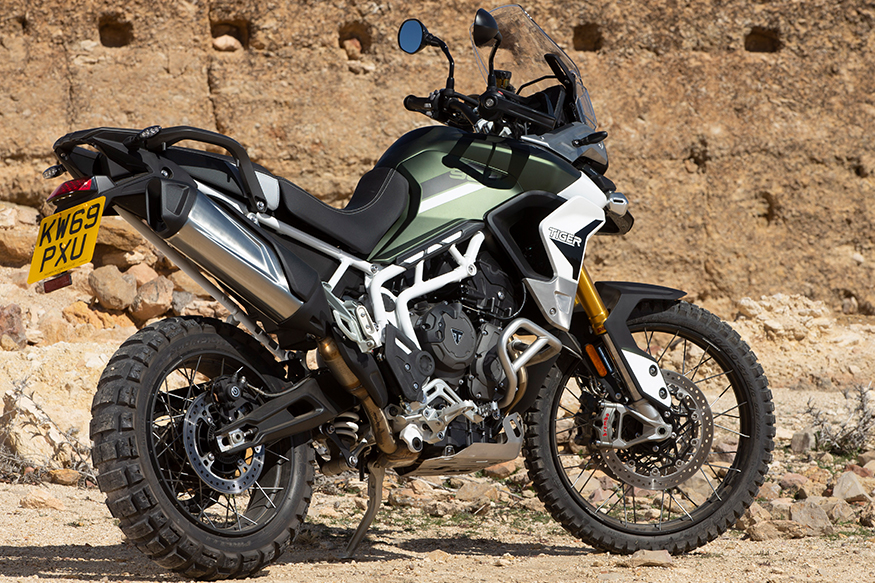 What this does is that it lowers the centre of gravity taking away the top-heavy feeling that it used to have. The Tiger 900 overall is up to 5 kilos lighter as well despite meeting the stricter Euro V emission norm. And in that state of tune, this engine makes 10 per cent more torque than before and 12 per cent more power in the mid-RPM band.

This increase in power makes it capable of doing 0-100 km/h in just 3.81 seconds, almost a second faster than the older Tiger 800.

And since the engine is now placed like this, Triumph has had to split the radiator. And they say that this way, it is going to be a lot more efficient and it now directs the hot air away from the rider. This split radiator also helps in giving a more committed stance to the motorcycle. Stopping duties are done by Brembo Stylema callipers which, simply put, are the best brakes in the world. They have a great bite and give lots of feedback to the rider and are usually seen on much more expensive motorcycles. On the electronics front, you get things like lean-sensitive traction control and ABS as well. What I also really appreciate is the fact that the chassis, which is also new, now has a bolt-on aluminium subframe and bolt-on rear footpegs. So, if you crash the bike, you don’t have to change the entire chassis and you can also remove the rear footpegs for off-roading. You also have a lot more accessible air filter which is just a seat removal away that will make your life a lot easier on longer rides.

And speaking of longer rides, it is the GT Pro variant that is claimed to be meant for exactly that. And it was the first bike that we rode.

First thing first, I could have both my feet planted on the ground when I sat on this motorcycle. For reference, my height is 5 foot 10 in and I think, it is this accessibility factor with the GT Pro model which will be a huge draw towards those buying a Triumph Tiger in the coming months. However, what’s good about this is how good this motorcycle is on the roads. And a big reason for that, again, is that engine. And the actual reason might ruffle some feathers. You see, Triumph is now using a new T-Plane crank in the engine which also now has a new firing order. This makes the Tiger lose its whistling sound that many know it for. Instead, it now has a bit of a burble and you get used to it after a while.

But you won’t complain about the change in sound once you see how this engine performs.

No longer do you have to rev the guts out of it to get into the meaty end of power. It is a lot linear and it packs a lot more torque lower down in the RPM range. This makes for effortless riding on the road and the fifth and sixth gear are now slightly taller too, so you can sit comfortably on sixth gear anywhere from 50 km/h to about 200 km/h or whatever speed you fancy.

Along with that, you get a 6-speed transmission that comes with a quicksfiter and auto-blipper which means you can shift up and down through the gearbox without really using the clutch. The fact that you also get things like heated seats, heated grips and cruise control is just icing on the cake.

I rode this for about 300 km in a single stretch and had no complaints whatsoever. What’s also specific to the GT Pro is that this Tiger uses suspension from Marzocchi which has been tuned specifically for the road. The rear one, in particular, can be adjusted electronically on the fly with through the handlebar-mounted controls through 9 stages and that comes in very handy. And in case you are wondering when it comes to going off-road then the GT does a decent job as well. It is capable of tackling bad roads and go for light off-roading with ease.

So overall, it is still a very capable motorcycle and is recommended for those who do not aim to do hardcore off-roading and are looking for munching miles and touring on the tarmac. Or even perhaps, thanks to the new suspension, a bit of fun on the tarmac. But in case you do want to go off-road, then it is the Tiger 900 Rally Pro that you should be looking at.

This brings us to the second day of our journey which was spent riding the Rally Pro through some fantastic trails including some of the toughest terrains that Morocco had to offer. And, of course, the biggest highlight of the entire package turned out to be the engine onboard once again. But that’s not the only part of the puzzle that makes all of this magic work together as a whole. The Tiger 900 Rally Pro feels like a very different motorcycle the moment you get on it. The seat height is higher and the entire rider geometry is different. The footpegs on the Rally Pro are a bit rear-set to help you stand up and attack those trails with ease. And speaking of standing up, at that position, you will also appreciate the wider handlebar that gives you more leverage.

Also, Triumph has gone for a bigger 21-inch wheel at the front for better off-road capabilities. And yes, these are tubeless spoked wheels on the Rally Pro which is a great thing. We were riding this motorcycle with Pirelli Scorpion Rally tyres fitted to it and tyres like that help you unlock the full capability of the motorcycle.

And to let it do that, Triumph didn’t stop there. The Rally Pro has also been given a shorter wheelbase and sharper rake and trail to make it more agile and that it is. The biggest difference while off-roading now is that the Tiger is a lot more capable than before and that’s due to the suspension which is by Showa in this model, and it has been tuned specifically for off-roading. Yes, this is adjustable both front and back, although in this case, it is all manual.

And what a world of a difference has this suspension made.

All of this combined with the newly positioned engine make the new Tiger require a lot less effort to do a lot more. And the best part is, that this engine does not need to be revved to the moon to extract torque and with the quick-shifter and auto-blipper in place, you can focus fully on the trail. Lastly, the Tiger Rally Pro also gets a particular off-road pro mode which lets you turn off traction control and ABS and gives you a specific throttle map to everything a breeze. 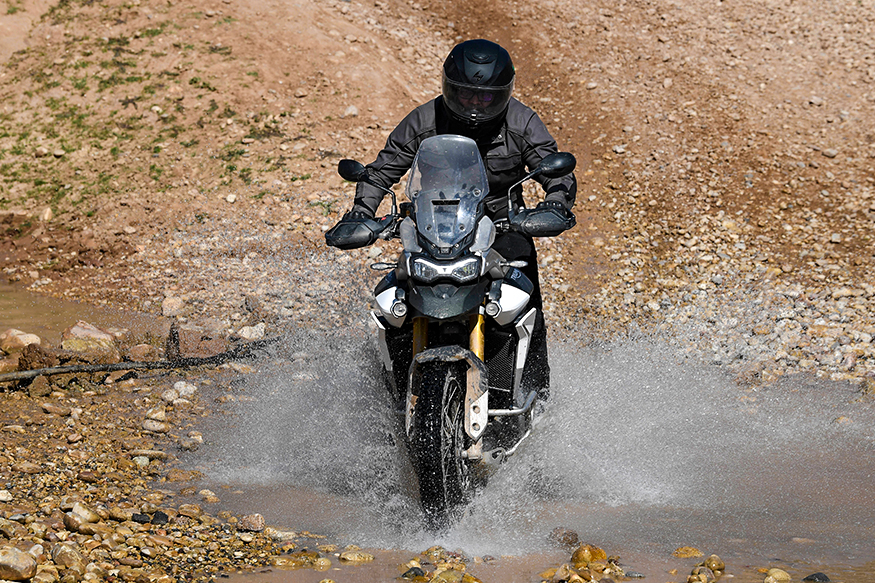 And well, there you have it, that’s new Tiger 900 for you. The only thing left to talk about is the new 7-inch digital instrument cluster that is fancy and makes it feel like the bike belongs to 2020. It has four display styles for you to choose from. And since it has Bluetooth connectivity, you can also pair it to your GoPro and operate it from the handlebar-mounted controls. This, added with Navigation, music and app connectivity that shows all your ride statistics – adds great value to the package that you are getting. However, I did miss an analogue tachometer but I guess I am just too old school. If the digital one works for you or not, is something you will have to decide.

So to sum up my thoughts about the Triumph Tiger 900. Well, these motorcycles still manage to feel incredibly familiar to those who have loved or ridden a Tiger before. However, they are a lot better in almost every scenario and now are also a very friendly package for those looking to step up to a bigger adventure motorcycle. Triumph is expected to launch the Tigers in April 2020 and yes, this will be BS-VI emission norm compliant. Expect the new tigers to be about Rs 1 lakh or so more expensive than their corresponding older models. But having experienced the new ones, I can safely say, that for a small price hike, you are now getting a lot more motorcycle that you simply cannot ignore if you’re looking for your next ADV as the Tiger 900s are pretty much the best ones out there right now.