TVS Ronin 225 is an attempt to unsettle and disrupt the cruiser segment which is presently the den of Royal Enfield, Bajaj and Jawa

TVS Motor Company has been synonymous with some of the most iconic motorcycles that the Indian audience has ever seen in the last few years. Be it the warhorse Apache series or the classic Victor range, each has its own peculiarity and has been applauded immensely by auto pundits. But with the Ronin, TVS thought of trying something that it never had dared until now, nor the people had expected it from the bikemaker. Yes, here we are talking about TVS foraying into the cruiser segment of motorcycles which had been ruled by brands like Royal Enfield, Jawa and Bajaj for many years.

TVS Ronin is the first attempt at the cruiser segment of bikes from the brand and in more than one way, it has been successful. Though many of you here will argue that the Ronin doesn’t particularly fit into the hardcore segment due to a few Scrambler-ish elements but still the effort from TVS is a valiant one. We had the bike with us for a few days and here are our findings:

TVS Ronin is not an out-and-out Scrambler; instead the styling appears to be an amalgamation of several motorcycles. In particular, it appeared to me that the designers at TVS took a lot of inspiration from old-school retro motorcycles. The front fascia is dominated by the circular headlamp with AHO function which is flanked well by the T-shaped LED DRL. The inclusion of golden-colored USD front forks is a welcome move as it compliments the headlamp design as well. 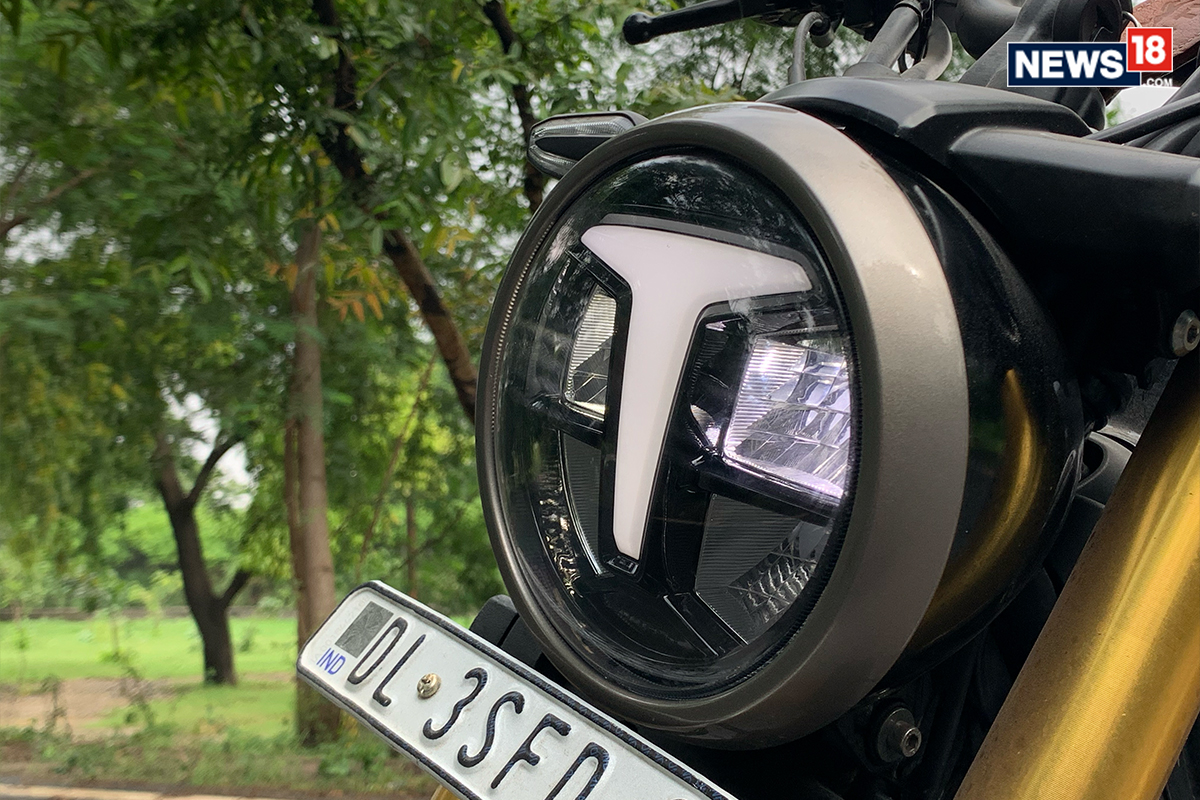 The turn indicators are sleek and house LED units. The bike rides on machined 9-spoke alloy wheels while other styling elements include engine casings in black shade, huge belly pan, and black exhaust pipe with the tip in silver colour. The rear end boasts of an LED tail-lamp cluster. One noteworthy thing here is that TVS has equipped LED lighting everywhere, be it the headlamp, be it the turn indicators and be it the tail-lamps.

To begin with, TVS Ronin boasts of a single-pod instrument cluster which is fully digital in nature and provides an array of information to the rider such as distance to empty, gear shift indicator and side stand engine inhibitor. The seat is a single-piece unit in brown finish which is fairly comfortable for the rider as well as the pillion with soft cushioning. The buyers also get an optional USB charger but the centre of attraction remains the TVS Smart Xonnect Bluetooth connectivity system as it works quite efficiently with multiple features like call and message alerts, turn-by-turn navigation, and voice assistance. The Ronin also comes with riding modes in the form of Urban and Rain. The switches are positioned accurately for the utmost convenience of the rider while the plastic used is also of the optimum quality. The company has not compromised anywhere with the quality and one gets full value for the money spent.

Sitting on a double cradle split synchro stiff frame, TVS Ronin features 41 mm USD Showa forks as front suspension and mono-shock with 7-step adjustable pre-load as rear suspension. The suspension system as a whole is quite competent and during our ride, we observed that it absorbed most of the potholes because it is softer than most of us had thought. Hence, it felt really comfortable to ride the bike even on rough terrains.

The riding position is upright in the Ronin with a fairly easy reach to the handlebar. The front-set foot pegs offer a relaxed journey to the rider. Hence, in the ride and handling department, TVS Ronin performs exceedingly well than our expectations. As for braking, the bike is equipped with a 300 mm disc unit at front and 240 mm disc unit at rear along with a dual-channel ABS. The entire braking system is impressive with braking distance being very less. During sudden braking at high speeds, the bike was stable and it didn’t feel dangerous. A special mention goes to the adjustable brake and clutch levers for enhanced rider convenience.

TVS Ronin is powered by a BS6-compliant 225.9 cc single-cylinder oil-cooled petrol engine which generates top power of 20.2 bhp at 7,750 rpm and peak torque of 19.93 Nm at 3,750 rpm. The engine is linked to a 5-speed gearbox with a slipper clutch which is a welcome move by the brand. The engine performs superbly at the highways with the acceleration being brisk and at par with most of the 350 cc cruiser motorcycles currently on sale in India. To be precise, it does the 0-100kmph sprint in 14.19 seconds while the 0-60kmph sprint is completed even quicker in merely 4.26 seconds. TVS has incorporated a silent starter system for an almost noiseless start at feather touch of the switch. The engine is smooth, refined and peppy. The riders can feel vibrations at higher speeds, say after 100kmph. During city rides, the Ronin is not too hard to ride either, courtesy the Glide Through Technology (GTT) which enables the rider to pass through thick traffic by simply releasing the clutch in the 1st, 2nd and 3rd gears without having the need to accelerate actually. The mileage figures that you get with this bike range somewhere between 30-35kmph. All said and done, TVS Ronin excels in the performance arena with the 225.9 cc engine working effortlessly at higher (well, not in triple digits) as well as lower speeds.

TVS Ronin is introduced in three namely variants SS, DS and TD in a price range of Rs 1.49-1.69 lakh (ex-showroom, Delhi) in the Indian market. With the introduction of Ronin, TVS has tried to step into the territory which is solely dominated by Royal Enfield and it won’t be an understatement to say that it has succeeded in its tryst. It is a valiant effort by TVS engineers to create this motorcycle with impeccable performance. It directly locks horns with Royal Enfield Hunter 350 which is bigger and powerful but priced in a similar range. It can be a good alternative to RE bikes if TVS gets more and more people to test ride the Ronin ahead of the Royal Enfield motorcycles as it is at par with them and even better in some areas. Design is a pretty subjective matter and varies from individual to individual, so no comments there but in the rest of the departments, Ronin wins the heart.