Another rare model, a 1924 Bugatti Type 23 Brescia two-seater is also likely to be a hot item.

The 15th edition of Artcurial's "Automobiles Sur Les Champs" auction will feature about a hundred rare vehicles, foremost among which is a 1953 Fiat 8V Rapi Berlinetta, estimated to go for a cool 1.1 to 1.3 million euros. The sale is set to take place in Paris on October 27. A total of 117 sweet rides (70 cars and 47 motorcycles) will be put up for auction, with the belle of the ball being a 1953 Fiat "OttVu" Tipo 106 Sport Berlinetta. Only 34 of the highly specific model were ever produced in its first-series Rapi version, and the one being offered for sale is in perfect working order and eligible to participate in the main collector-car races. Its high price is due to the fact that its interior, complete with dashboard, is in its original condition, as is its engine.

Another rare model is also likely to be a hot item: a 1924 Bugatti Type 23 Brescia two-seater, which was the first of the brand's cars to be equipped with a four-valves-per-cylinder engine. Experts have estimated the car's going price to be between 550,000 and 650,000 euros. 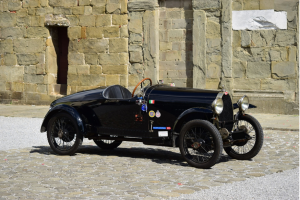 Motorcycles, for their part, will be represented by a number of historical models, which are expected to go from 1,000 euros for a 1967 Benelli Sport Leoncino, all the way to 30,000 euros for a Zündapp K 800 with sidecar. As usual, all of the cars put up for auction at "Automobiles Sur Les Champs" will be shown in Artcurial's private garage, located at 59 avenue Montaigne in Paris, on October 26 and 27. "Automobiles Sur Les Champs" takes place on October 27, 2019, in Paris.