Understanding the 3 Types of Airplane Engines - Turbojet, Turboprop and Tubofan

Airplanes are indeed one of human's greatest inventions and as time goes by modern technology has helped us better the inventions even more. Here are a few types of jet engines that you should know about.

Humans became the superior race on planet earth after more than a million years of evolution. We conquered water, land and air and are now aiming to go past it. While there are a plethora of definitions that could quantify the achievements of Homo sapiens, a single one that stands out is engineering, specifically aviation engineering.

Let alone commuting and convenience, humans have raged war over skies which defines how advanced the technology has reached to provide us with the confidence to fly hundreds of feet off of the ground. Since the birth of aviation, the idea of a vessel that’s light enough to fly has changed dramatically. Aeroplanes today can withstand nature’s strongest storms and a major credit goes to the engines that it is powered by.

At the outset, let us tell you that we are no expert in mechanical advancements in the field of aviation. But we’ll try our best to explain the three most used types of engines that are used in aeroplanes in the modern era. Before we get into the technicalities of an engine, there are three components that you need to be aware of – a compressor that pressurizes the air, a combustion chamber where the fuel is burned and a turbine that, in turns, helps in driving the compressor. A turbojet per se is the most basic type of a jet engine. In such a setup, the air taken in from the opening in the front of an engine is compressed to about 3 to 12 times its original pressure in the compressor. This air is then burned in combination with fuel in the combustion chamber to raise the temperature of the fluid mixture to about 600 to 700 degree Celcius. The resulting hot air is then passed through a turbine that in turn powers the compressor.

If the turbine and compressor are efficient, the pressure coming to the turbine will be near twice the atmospheric pressure and this excess pressure is sent to the nozzle to produce a high-velocity stream of gas that produces the thrust. In addition to this, substantial thrust can further be created with the help of a second combustion chamber that is positioned after the turbine and before the nozzle. This results in an increased temperature and subsequently an increase of about 40 per cent in thrust.

In a nutshell, the turbojet is a reaction engine where expanding gases push against the front of the engine. The turbojet sucks in air and either compresses or squeezes it. These gases bounce back and shoot out of the rear of exhaust, pushing the plane forward. 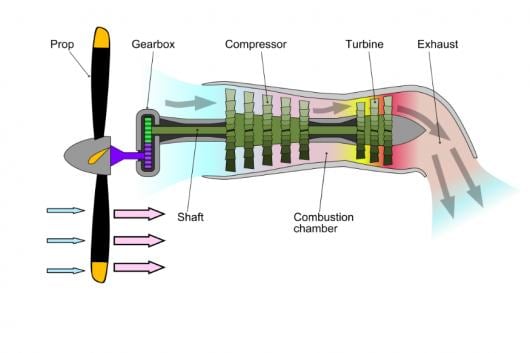 In case of a turboprop jet engine, the turbine at the back is turned by hot gasses and this in turns a shaft that spins the propeller. This type of engine is most common in small airliners and transport aircraft.

Modern turboprop engines come with a smaller diameter propeller with more number of blades for efficient operation at higher speeds. To cope up with the higher flight speeds, the blades are made in scimitar-shape with swept-back leading edges at the blade tips. Such kind of propellers is called propfans. 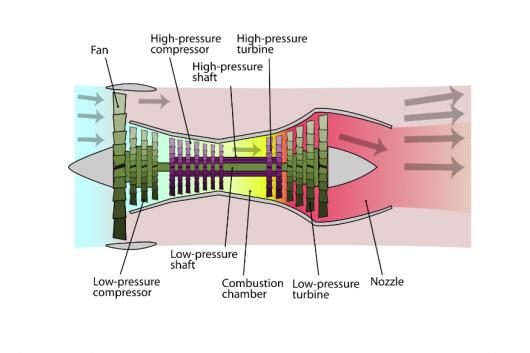 Unlike a turbojet that sucks in all the air inside the engine, a turbofan engine sports a large fan at the front which sucks in most of the airflow around the outside of the engine. This makes the engine quieter and more thrust at low speeds. A majority of all the airliners are powered by this engine.

A small portion of the air enters the engine and the rest is passed through a low-pressure condenser. This air then comes out as cold jet which is then mixed with gas-generator to produce a hot jet. The objective of this sort of bypass system is to increase thrust without increasing fuel consumption. It achieves this by increasing the total air-mass flow and reducing the velocity within the same total energy supply.