We tested the latest and the fastest Volvo till date – the S60 Polestar to a race track and was left more than impressed.

Manav Sinha
Let’s start with the name – Polestar. A nod to the pole stars visible from Sweden, the place where Volvos are conceived and a play of words on pole position. The origins of this name go back to 1996 when it was called as Flash Engineering and later named Polestar Racing in 2005. It was known for making some of the fastest Volvos on the planet. Fast forward to 2015 and Volvo undertook Polestar Performance and one of the results of that acquisition is the S60 Polestar.

To put it into perspective, Polestar is somewhat similar to the Mercedes’ sub-brand AMG and BMW’s M Division which too are known for making faster high-performance versions of already existing models.

Interestingly, when it comes to the game of performance sedans, then the Germans – Audi, BMW and Mercedes-Benz, have been dominating it for ages. Now, they have a new player entering the playground in the form of the Volvo S60 Polestar. It’s dressed sharp and suave, true to its Swedish origins, and has the heart made by a champion racing team.

To really understand what it is capable of, we tested it at the Kari Motor Speedway racetrack in Coimbatore – a mix of sharp technical turns and a long straight to let the horses loose. Here’s what we found. Volvo S60 Polestar from the back. (Photo: Manav Sinha/News18.com)

Since it is based on the S60 sedan, the similarities are evident but as a whole, the car has a more aggressive and sporty stance. The S60 Polestar has received over 70 upgrades in total overall. The changes on the exterior include a sportier front bumper with splitters, revised rear bumper with new exhaust and rear diffuser and there's a spoiler on top too. The front grille, outside rear view mirror and the window panels have been blacked out to make the signature blue Polestar colour stand out. There’s several Polestar badging on the car as well as along with one on the exhaust pipes (which is seriously cool) that tell you it’s the faster version of the S60.

The interiors remain largely similar except the centre console which now has a carbon fibre accent and there are cooler race pedals on this one. The stitching inside the cabin has been done in Polestar blue as well and is a small but significant detail that differentiates the cabin experience as compared to sitting in a regular S60.

Then, there are the gorgeous 20-inch wheels that wear the slick Michelin 245/35 Z R20s. There is polestar insignia finds its way on the brake callipers and the wheel as well. Interestingly, the design of the wheels isn’t just to look good cosmetically as it also increases the air flow towards the brakes – helping them to stay cool and increase their performance as a result. But given that it’s a sports saloon, the focus is on the drive experience. So let’s get to it.

Under the long sculpted hood lies a 1969cc 4-cylinder petrol engine that uses a supercharger as well as a turbocharger to deliver 367 horsepower and 470 Nm of torque. It comes mated to an 8-speed automatic transmission with steering mounted paddle shifters and an all-wheel-drive system with torque vectoring for better high-speed handling. The claimed top speed is 250 km/h but given the technical race track, we couldn’t go past 180 km/h. There’s also a launch control system on board that can catapult the car from 0-100 km/h in just 4.7 seconds. When it comes to stopping then it has one of the best brakes in the business – six piston Brembo brakes and they have so much bite and feedback that after every turn, it’ll make you feel that you could have braked later.

The suspension setup has been tweaked as well. The springs are 80 percent stiffer and it gets Ohlin shock absorbers. What all this hardware translates to is a great driver’s car. The Volvo S60 Polestar manages to feel connected to the driver. The tyres stick to the tarmac even during sharp high speed turns and even though there’s a bit of understeer, the chassis more than makes up for it. It is more like a point and shoot camera than an overly complicated DSLR, which means, you can focus on driving the car rather than try to tame it to behave as per your wish. The brakes are progressive and the steering is direct.

The other great thing about the car, just like a typical Volvo, is the suite of safety measures that it has. There is almost every safety feature present in the car that you can think of and it includes the likes of Radar-based safety features, adaptive cruise control, lane departure warning, park pilot assist and blind spot detection. It does a have a 5-star NCAP safety rating after all.

Oh, and it sounds like an absolute bliss as well. Loud enough to let your neighbours know that you drive a very sporty sports sedan. 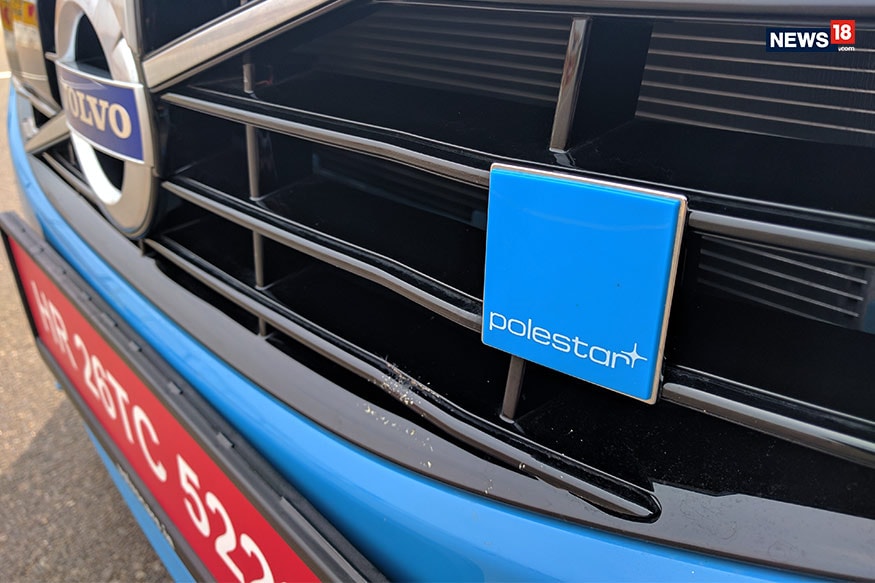 There are several Polestar badgings on the exterior. (Photo: Manav Sinha/News18.com)

Volvo has pretty much hit the nail on its head with the S60 Polestar when it comes to the safety features and more importantly – the driving experience. In terms of looks, it is one of those designs that will age very well over time. Five years down the line, the Polestar will look just as gracious as it does today. It has a bit of an understated sleeper car sort of an image that goes along with it.

This may or may not be a good thing depending on your taste as some might find it playing a bit too safe in the style department and in differentiating it from the regular S60.

Being a Polestar offering, the car will have to go against German rivals like the BMW M3 and the Mercedes-AMG C-Class C 43. Both of which cost way more than the Volvo. At the end of the day, the Volvo S60 Polestar has brought with itself a fresh breath of air in a German dominated segment. The commendable thing is that Volvo did not hold back in giving the Germans a run for their money and given its price tag – Rs 52.5 Lakh (ex-showroom, Delhi), Volvo has done it and how!

But for those who seek an out and out performance saloon, price often comes secondary. For those, the Volvo S60 Polestar will serve as a 4-seater sedan that can be taken for grocery shopping during the weekdays or even as your daily commuter to office – something that the Volvo S60 was already good at. The party piece is that once the weekdays are done with, the S60 Polestar will happily break lap records at your nearest race track and drive you home after it as well.

(The author was on invite at Kari Motor Speedway by Volvo India.)
Manav Sinha