On paper, the XC40 is loaded to the brim as far as safety and comfort features are concerned. But how good is it to drive on the Indian roads?

There’s a big market of entry-level luxury SUVs in India for people who want to move on from their Endeavours and Fortuners. While both of the SUVs are priced close to Rs 30 Lakh (based on the variant), a lot of people can stretch their budget to buy something with a luxury tag. Mercedes already had the GLA, Audi has the Q3 and the BMW has the X1 in the offering, but Volvo is yet to tap this segment. Realizing its potential, the Swedish automaker is bringing the XC40 SUV in India, which will be placed below XC90 and XC60, hence completing the SUV portfolio of Volvo in India. On paper, the XC40 is loaded to the brim as far as safety and comfort features are concerned. But how good is it to drive on the Indian roads? We recently got a chance to drive the Volvo’s latest offering in Hyderabad and here’s our first drive review of the Volvo XC40!

The Volvo XC40 is built on the company’s new CMA (compact modular architecture) platform, and will underpin the future 40-series cars. That aside, the design of the XC40 is nothing like its bigger siblings, apart from a couple of signature design elements like the Thor’s Hammer headlights, the boomerang-style taillight and the concave vertical slat grille. The rest of the car looks like a proper SUV with beefy and squarish design. There’s a an ample use of straight lines, and the large wheel arches along with 18-inch wheels and the segment best 211 mm ground clearance, make it look quite high as compared to the rivals. Volvo’s new strategy is to launch only the top-end fully loaded models in India and the XC40 comes only in R-Design trim. For us, the stand out design element would be the large hexagonal crease on each side of the XC40 and the dual tone exterior shade. 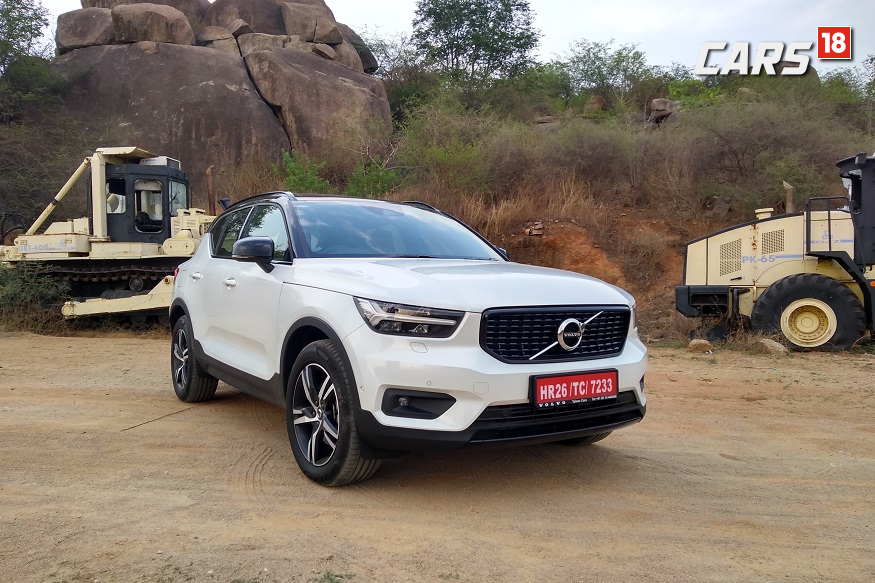 Before talking about the cabin, we would like to talk about the practicality of the XC40 as being a small car doesn’t mean Volvo has compromised with the spaces inside the cabin. Case-in-point, the rear seats can be folded to create an extra space in the boot that goes from 460 to 1,336 litres. There’s also an underfloor storage area in the boot that’s an additional 73 litres. There are no speakers in the doors, meaning there’s a huge space in the door bins to place bottles, or even a laptop. There’s a box under the armrest, under seat trays in the front seats, retractable shopping hooks, phone space and small bin for waste papers. While the driver seat is nice and comfortable, seating 5-full grown adults can be a task in itself, and the cabin is more suited for 4 people. Talking of the cabin design, it’s is similar to the rest of the new age Volvos, and is stylish to say the least, thanks to an all-black cabin with lava trim. There is also a fully black cabin on offer. It gets a large portrait 9-inch Sensus touchscreen system with a Harman Kardon powered 13-speaker music system and has Apple CarPlay and Android Auto. The small joystick like crystal gear lever is a futuristic touch to the cabin. The other stand out bits include swoopy door handles, frameless inner rear-view mirror, and the vertically stacked AC vents. Feature wise, the Volvo XC40 will be offered with an inductive charging pad for the mobile phones, panoramic sunroof, heated seats, a powered tailgate, fully digital instrument panel with navigation support. The woofer is under the dashboard for better acoustics. 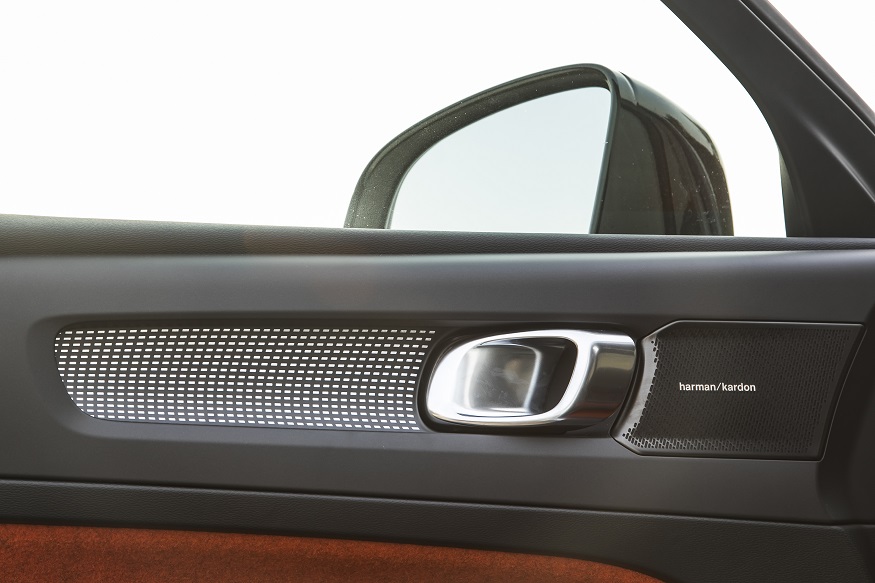 Volvo is offering the XC40 in India with only one engine option – the D4 diesel engine that comes with an all-wheel drive as standard. The D4 diesel is a 2.0-litre engine producing 190hp and 400 Nm, and is mated to an eight-speed automatic gearbox. Thanks to the CMA platform, Volvo might add a hybrid unit in the later stage. Volvo cars are not an out and out performers, and the D4 in XC40 is the same, but then, it has a very linear delivery, making it driveable throughout the rev range. There are four driving modes to choose from, including Dynamic, Comfort and Eco mode. If you want to keep the driver inside you alive, dynamic mode is your best friend. The suspension is tuned well for the Indian roads and gives a plush ride quality. The XC40 rides high and the body roll can be felt at high speeds around corners, but it’s not that prominent. The steering is intuitive and responds well to all the conditions. Volvo XC40 will be offered only in the R-Design trim. (Image: Siddharth Safaya/News18.com)

As always Volvo XC40 is as safe as it can get, and they have retained their safest car manufacturer in the world tag with the XC40 SUV. Apart from the airbags, ABS, TCS, hill ascent and descent and park assist, there’s the driver assistance systems like the Blind Spot Information, road-sign reading, lane keep assist, and the run off road mitigation system. The run off mitigation alerts the driver if the car leaves the road unintentionally through steering inputs. It also gets a radar based active safety system with adaptive cruise control, pedestrian and large animal detection. The Volvo XC40 will be placed as an entry-level luxury SUV, and we are expecting it to be priced at around Rs 40 Lakhs. While the rivals offer a better deal (money-wise) in this segment, if you go for the fully loaded, they will be priced close to what Volvo XC40 will be priced, minus all the futuristic safety features. What you get for this amount is a beefy looking luxury SUV with super safety and some great features too. It wouldn’t be wrong to say that once launched in India, the Volvo XC40 will give some serious run for the money to the Germans out there.