The government, however, introduced a standard deduction worth Rs 40,000 per annum for transport and medical reimbursements.

New Delhi: Much to the disappointment of the salaried class of the country, Finance Minister Arun Jaitley while presenting his last full fledged Budget did not alter income tax rates.

"The government provided enough tax relief to the salaried class in the last three years. I do not propose any further changes in the income tax front," said Jaitley.

The government, however, introduced a standard deduction worth Rs 40,000 per annum for transport and medical reimbursements.

"It is surprising that the government has not come up with tax sops for the common man. Probably fiscal deficit has played a role in the government of having enough headroom to provide the relief. Crude oil prices also have a role," said DK Srivastava.

Jaitley in his last Budget reduced rate of income tax to 5% from an erstwhile rate of 10% in the income slab of 2.5 lakh per annum to 5 lakh per annum.

Every individual whose total income exceeds tax exemption limit has to pay income tax based on prevailing rates applicable from time to time.

The income tax exemption limit till last year was 2.5 lakh per annum.

Profits or gains that arises from the sale of a ‘capital asset’ is termed as capital gain. This gain or profit is charged to tax in the year in which the transfer of the capital asset takes place.

Capital gains are not applicable when an asset is inherited because there is no sale, only a transfer. However, if this asset is sold by the person who inherits it, capital gains tax will be applicable. The Income Tax Act has specifically exempted assets received as gifts by way of an inheritance or will. 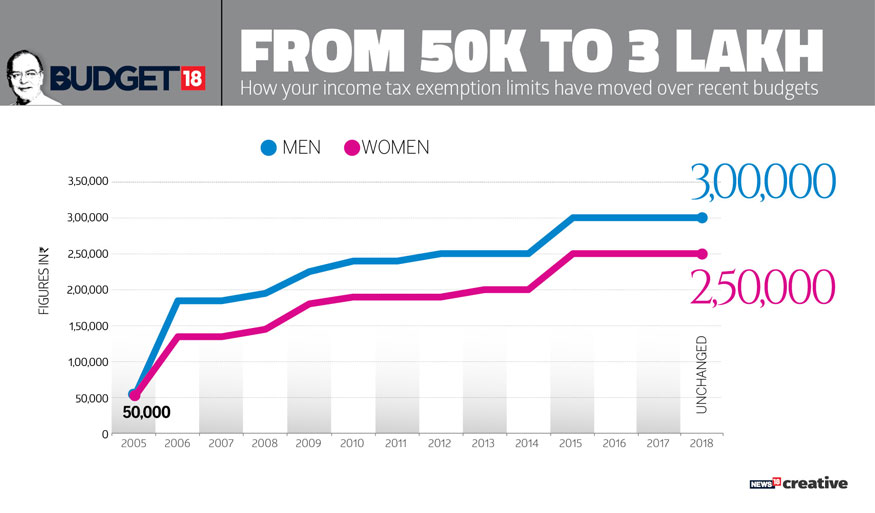 From FY 2017-18 onwards the contention of 36 months has been reduced to 24 months in the case of immovable property being land, building, and house property.

If securities transaction tax is not applicable, the short-term capital gain is added to your income tax return and the taxpayer is taxed according to his income tax slab.