RIL AGM 2020 LIVE Updates: Reliance Industries Mukesh Ambani is expected to make announcements on deal with Saudi Aramco, plans of listing Jio Platforms and Reliance Retail. The announcements will have a bearing on the RIL share price.

Ambani, addressing the first ever virtual Annual General Meeting of RIL, laid the future roadmap for the company and also announced that Jio was developing a homegrown 5G solution, that has been made in India from scratch. This will enable Jio to launch a “world-class 5G service in India”. Ambani stated that this 5G solution will be ready for trials as soon as 5G spectrum is available and be ready for field deployment next year. Reliance Jio has announced its plans for its upcoming 5G connectivity service which the company will be building from scratch.

Search Engine Giant Google Will Invest Rs 33,737 Crore in Jio Platforms | Google has agreed to invest Rs 33,737 crore to buy a 7.7 per cent stake in Reliance Industries' technology venture, adding to a slew of investments since April that has crossed Rs 1.52 lakh crore. With this deal, Reliance has sold 32.84  per cent stake in Jio Platforms Ltd - the unit that houses India's youngest but largest telecom firm Jio Infocomm and apps. In total, Jio has raised Rs 1,52,055.45 crore. Google, which is the 13th marquee firm to have set a sight on India's hottest digital play in 12 weeks, values Jio Platforms at Rs 4.36 lakh crore. This is less than Rs 4.91 lakh crore value at which last investor, Qualcomm had invested just last week.

A RECAP | At the company’s first virtual annual general meeting on Wednesday, Reliance Industries Chairman Mukesh Ambani said his group's retail venture has received strong interest from strategic and financial investors. "We will induct global partners and investors in Reliance Retail in the next few quarters," he said at Reliance Industries annual general meeting. Reliance Retail has already started pilots of its ecommerce venture."We have successfully piloted JioMart grocery model with kirana partners. The beta version of JioMart grocery platform is being piloted in 200 cities. Daily orders have crossed 2.5 lakh, and the number is growing each day," Ambani said.

At the recently concluded Annual General Meeting by Reliance Industries, Jio Platforms played a key role, taking up the majority of RIL’s biggest announcements. Part of it is JioMart, which is now primed to expand steadily in India’s hyperlocal retail space. JioMart, which already piloted a debut project with JioMart in 200 select cities, is now set to expand to more areas across India, and will use its strategic partnership with Facebook to use WhatsApp as a medium to bring kirana stores online. Read full story here. 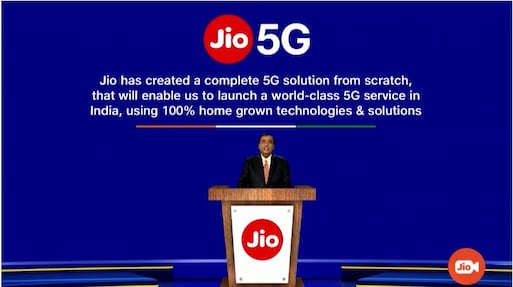 This announcement by Reliance Jio for the 5G solution comes as US Secretary of State, Mike Pompeo had praised India’s Reliance Jio as a clean network while being critical of Huawei’s 5G equipment as…

Google has agreed to invest Rs 33,737 crore to buy a 7.7 per cent stake in Reliance Industries' technology venture, adding to a slew of investments since April that has crossed Rs 1.52 lakh crore California-based Alphabet Inc joins Facebook Inc, which opened the investment cycle in Jio Platforms by picking 9.99 per cent stake for Rs 43,573.62 crore, as well as chipmaker Intel Corp and Qualcomm Inc. “Reliance is now ranked among the World’s 60 largest companies by market capitalization. And when Reliance scales still higher summits of success, our employees and shareholders will surely reap its rewards,” says Mukesh Ambani.

“Through Education and Sports for All initiative, Reliance Foundation has reached out to over 21.5 million children. Right from grassroots level – we are working tirelessly to develop a holistic sporting ecosystem in the country,” says Nita Ambani.

“I assure you, as soon as the coronavairus vaccine becomes available, we will volunteer by using the same digital distribution and supply chain, to ensure that the vaccine reaches every nook and corner of our country,” says Nita Ambani.

“Jio is providing digital connectivity to over 40 crore people, empowering over 30,000 organisations to work from home, and lakhs of students to learn from home. Reliance has also been providing free fuel to Emergency Service vehicles across the country. This is not just business for us. It is our duty, our dharma, our seva to the nation,” says Nita Ambani.

On Mission Anna Seva |“Through Mission Anna Seva, we have provided more than 5 crore meals to marginalised communities, daily-wage earners, and frontline workers across the country,” says Nita Ambani at RIL AGM.

Nita Ambani, chairperson and founder of Reliance Foundation, is speaking at the AGM regarding the philanthropic activities of the organisation. “In record time, we produced 1 lakh PPEs and N95 masks every single day and that too at one-third the price of the imported ones,” says Nita Ambani.

‘Committed to a Long-term Partnership with Saudi Aramco’ | “With this we will have an integrated and competitive Oil to Chemicals portfolio which is valuable to global companies as it provides access to the large and growing Indian market. Due to unforeseen circumstances in the energy market and the Covid-19 situation, the deal has not progressed as per the original timeline. Our equity requirements have already been met.Nevertheless, we at Reliance value our over two-decade long relationship with Saudi Aramco and are committed to a long-term partnership,” says Mukesh Ambani.

On Reliance’s O2C Path Ahead | “Our O2C business has competitive feedstock streams that are the building blocks for specialty and new value chains of Acetyls, Acrylates, Phenols  and Polyurethanes. Reliance has been approached by global companies for strategic partnerships in its petrochemical business, including in utilizing these feedstocks. These potential partnerships will help us build competitive manufacturing capacity at our existing sites to serve the deficit Indian market that still depends on large-scale imports of chemicals,” says RIL Chairman Mukesh Ambani.

On Organised Retail |“Four things that give me huge satisfaction are: First, more than two-thirds of our nearly 12,000 stores are operated in Tier II, Tier III and Tier IV towns. Second, the deep-rooted bond with tens of thousands of farmers that has helped us source over 80% of our fresh fruits and vegetable directly from farmers. We sell more fruits and vegetables than any other organised retailer in the country.  Third, we continue to provide large employment and development opportunities for lakhs of people across India. Fourth, our growth model is based on partnership with small merchants and shopkeepers,” Says RIL Chairman Mukesh Ambani.

Proud to Partner with Reliance Jio: Sundar Pichai | “Everyone should have access to the internet. Proud to partner with @reliancejio to increase access for the hundreds of millions in India who don’t own a smartphone with our 1st investment of $4.5B from the #GoogleForIndia Digitization Fund,” tweets Sundar  Pichai, CEO, Google and Alphabet.

Everyone should have access to the internet. Proud to partner with @reliancejio to increase access for the hundreds of millions in India who don’t own a smartphone with our 1st investment of $4.5B from the #GoogleForIndia Digitization Fund.https://t.co/1fP8iBZQfm

“Today, people in India no longer have to wait for technology to come for you. Smartphones and affordable data have made it possible for a billion Indians to come online. We have never been more hopeful about India’s future,” says Alphabet CEO Sundar Pichai in a video message.

“Jio will integrate start-ups into Jio’s roadmap and will help them reach their full potential. We are well-positioned to help Indian start-ups in a number of ways—whether it be technology development, product development, distribution market access and even scale up capital,” says RIL Chairman Mukesh Ambani.

Google & Jio to Develop Cheap 5G Smartphone | “Have sold 100 million Jio Phones till date. But there are many feature phone users waiting to upgrade to a conventional smart phone. We believe we can design an entry level 4G or even a 5G smart phone. We believe that we can design such a phone at a fraction of the current cost. Google and Jio are partnering to build a value-engineered Android based smartphone Operation System,” says RIL Chariman Mukesh Ambani at the 43rd annual general meeting of Reliance Industries Limited.

Jio Developing Homegrown 5G Telecom Solution: Mukesh Ambani |"Jio has designed and developed a complete 5G solution from scratch. It will be ready for trials as soon as 5G spectrum is available and can be ready for field deployment next year," Ambani said at Reliance Industries' annual general meeting. Jio's global-scale 4G and fibre network is powered by several core software technologies and components. "It is this capability and know-how that positions Jio on the cutting edge of another exciting frontier 5G," he said.

“JioMart is built upon two fundamental pillars -- 1. A powerful omni-channel tech-platform to unite customers, kiranas and producers. 2. A widespread physical network of Reliance Retail that takes benefits of new commerce to every corner,” says Isha Ambani.

“I am proud to share that the entire 5G stack has been made by Jio employees. It is ready for deployment once the spectrum is allocated,” says Akash Ambani at 43rd annual general meeting of Reliance Industries Limited.

Isha Ambani and Akash Ambani conduct virtual demonstrations of the new Jio TV+. Jio TV+ will curate OTT platforms such as Netflix, Amazon Prime Video, Hotstar and others, into one app. Besides this, it is also equipped with voice-search.

Ambani also announced at the company’s first virtual annual general meeting that the company will spin off its oil-to-chemical business into a separate subsidiary by early 2021 after regulatory approvals, and detailed plans of also moving into green energy space.

“Due to unforeseen circumstances in the energy market and the Covid-19 situation, the Saudi Aramco deal has not progressed as per the original timeline. Our equity requirements have already been met. Nevertheless, we at Reliance value our over two-decade long relationship with Saudi Aramco and are committed to a long-term partnership,” he said.

On the Google-Jio deal, the RIL chairman said this is not just a financial but a strategic investment by the Internet giant. "Thus, Jio Platforms has now four strategic partners - Facebook, Intel, Qualcomm and Google. It has also six most admired technology and financial investors and three sovereign funds, taking the total tally of investors to 14. Total funds raised is Rs 1,52,056 crore," Ambani said.

This is the first time in the company's history that the AGM is being held online in view of the novel coronavirus pandemic. RIL's over a lakh shareholders can log in simultaneously from 500 different locations in India and abroad to attend the meeting.

"The 43rd annual meet will be held on Wednesday, July 15, 2020 at 2 pm through video conferencing/other audio-visual means," the company said in a regulatory filing.

The oil-telecom-to-retail giant is India’s most valued company and it recently crossed Rs 12 lakh crore in market capitalisation, becoming the first listed Indian entity to achieve the feat.

The surge in stock prices has largely been on the back of a series of stake sales in its telcom and digital arm, Jio Platforms. The company raised Rs 118,318.45 crore through a 25.24 per cent stake sale of equity of its subsidiary Jio Platforms to a dozen investors, including the likes of Facebook, Intel Capital and Qualcomm. It also raised ₹53,124.20 crore through a rights issue of its shares, which was subscribed 1.59 times.

At the last AGM, Ambani had promised shareholders that RIL would be a net debt free before March 2021, which he has fulfilled having raised ₹1.75 trillion against the net debt of ₹1.61 trillion.

For the first time, Reliance will allow users to enter the webinar through JioMeet video conferencing platform. Shareholders will be able to log into the event half an hour before it starts, listen to the plans and initiatives and comment and participate as well. Reliance will also stream the event live on the company’s official website, as well as on YouTube and Facebook.