SoftBank said Arora and Chairman and Chief Executive Masayoshi Son had disagreed over when Arora would replace Son as head of the group.

Tokyo: India-born Softbank President and COO Nikesh Arora has resigned from the company with effect from June 22 but will stay in advisory role for a year.

SoftBank said Arora and Chairman and Chief Executive Masayoshi Son had disagreed over when Arora would replace Son as head of the group.

Arora's resignation came because he wanted to begin taking the reins "in a few years’ time", SoftBank said, while Son intended to continue at the company's helm "for the time being".

"The difference of expected timelines between the two leads to Arora’s resignation."

Arora appeared to confirm that in a tweet, saying that Son would continue as CEO for "5-10 years".

"All good. Masa wanted to be CEO for longer, I did as promised, time to move on," he tweeted.

Arora however said he will continue with Softbank as advisor.

Plan to support them for an year, hence continuing as advisor. https://t.co/JBtSiFdSvJ— Nikesh Arora (@nikesharora) June 21, 2016 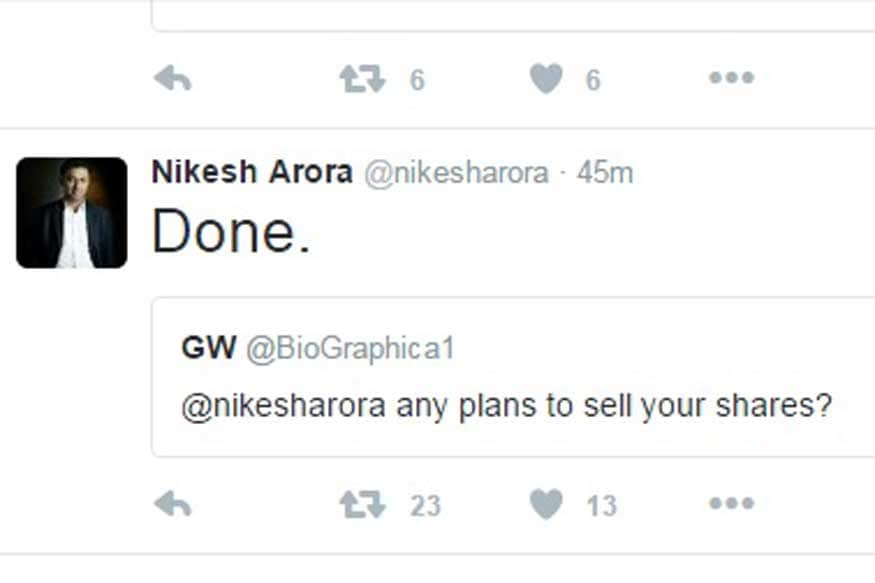 Before joining SoftBank, Arora was a longtime executive at Google Inc, where he oversaw all revenue and customer operations as well as marketing and partnerships.

Praising Arora's work at SBG, Son said he should be CEO of a global business.

"I had hoped to hand over the reins of SoftBank to him on my 60th birthday - but I feel my work is not done. I want to cement SoftBank 2.0, develop Sprint to its true potential and work on a few more crazy ideas. This will require me to be CEO for at least another five to ten years - this is not a time frame for me to keep Nikesh waiting for the top job," he said in a statement.

On Monday, SoftBank had said the allegations levelled by some shareholders against Arora, including those questioning his conduct and qualifications, have been found to be "without merit".

Arora had joined SoftBank as its Vice-Chairman and CEO of SB Group US -- previously SoftBank Internet and Media Inc -- in September 2014 from search giant Google.