'Chant Vedic Mantra to Boost Crop Yield': 11 Times Indians Proved That They Can Do Without Science (Or Common Sense)

Did you know to boost crop yields, farmers could just follow a vedic technique which requires them to sit, meditate and channel “cosmic energy” by chanting “Om rom jum sah” for at least 20 minutes a day? You would have known if you believed Goa Agriculture Minister Vijai Sardesai.

According to a report published in The Indian Express, the project titled “Shiv Yog Cosmic Farming” is designed by Dr Avadhoot Shivanand, a former chemical engineer turned godman through his Shiv Yog Foundation.

The report states that it was minister's wife who prompted him to take the step. “My wife Usha is a Shiv Yogi and she is the one who has been promoting this philosophy. I was sceptical at first too, but it’s not magic. There are studies backing this method,” Sardesai was quoted as saying by The Indian Express.

Sardesai further added there was no money involved and he's ready to explore "every method" to boost interest in farming.

"If you convince me a rock show or a beauty contest will also help get people excited about agriculture, I will pull it in the middle of the fields. We need to now look into methods to get everyone interested in farming," he said.

According to the report, the Goan farmers have been receiving “shakti” videos on WhatsApp, which have since gone viral. The videos apparently shot in fields of Madhya Pradesh show farmers sitting cross-legged and meditating with "Babaji" Shivanand, describing the impact on the field.

Of course, this isn't the first time an Indian (mostly politicians) has strayed away from science. Because phy-sucks, amirite?

We have compiled a list of Indians who have, over the years, said such things that will transport you back in time. Doc Brown, who? (Image only for representational purpose)

Members of Shri Ayutchandi Mahayagna Samiti in Meerut have now found an indigenous way to curb pollution. To bring their noble thought to reality, they have decided to burn 500 quintals of mango wood in a nine-day-long "mahayagna," reported TOI.

“In Hinduism, it is believed that "yagna" leads to purification and removal of pollution. Mango wood burnt after pouring ghee made from cow milk helps in reducing pollution. There is no scientific evidence to it yet because no research has been done so far,” Samiti's Vice Prez Girish Bansal told TOI.

The president of the committee, Gyanendra Agarwal, believes that the pure ghee used during hawans doesn't harm the environment.

“Mango wood that is burnt after pouring pure ghee does not form pollutants. It only purifies the air. According to a scientific report, the Ozone layer above our country is the least damaged because yagnas are done here frequently,” he said.

This was a suggestion offered by BJP member Virendra Singh to fellow Parliamentarians in the Lok Sabha in 2016 as a means to mitigate the drought situation.

Participating in the debate on drought, water crisis and issues connected with inter-linking of rivers, Singh recalled the mythological story of Raja Janak ploughing the fields and organising yagna to please the rain Gods.

"Raja Janak's rajdharma resulted in rains..Similarly, Modiji is trying to revive over seven lakh ponds to mitigate the problem of drought in the country," Singh said. "There are spiritual as well as scientific reasons for yagya. It helps in attracting clouds," he argued.

Asking all MPs to organise yagnas in their constituencies for rains, he said, "It will result in rains." "Rahul Gandhi eats beef and goes to the holy shrine (Kedarnath) without purifying himself. The earthquake was bound to happen," Maharaj was quoted by TOI as saying.

Maharaj only had to Google to read that earthquakes are usually caused when rock underground suddenly breaks along a fault. This sudden release of energy causes the seismic waves that make the ground shake. But of course, he thought he has a better explanation. In 2013, West Bengal Chief Minister Mamata Banerjee said in Kolkata that the rising number of rape cases was connected to increasing population. "You say rape incidents are on the rise. But the population is also swelling.

Is the population in the state the same as it was during the tenure of (the state's second chief minister) BC Roy?" she said.

4. Electricity in villages will curb population In 2009, Former Health and Family Welfare Minister Ghulam Nabi Azad said that the best way to curb India’s population growth is to provide electricity to Indian villages so that couples spend their time watching TV instead procreating and increasing the population, DNA reported.

“In olden days people had no other entertainment but sex, which is why they produced so many children. Today, TV is the biggest source of entertainment. Hence, it is important that there is electricity in every village so that people watch TV till late in the night.”

He further added, “By the time the serials are over, they’ll be too tired to have sex and will fall asleep. Then they won’t get a chance to reproduce. When there is no electricity, there is nothing else to do but produce babies.”

Thakor went onto say that Modi used to be as dark-complexioned as him, but the mushrooms have made him fair now. He further said that he has heard each of the mushrooms cost Rs 80,000 and the prime minister consumes five pieces on a daily basis.

6. Peahen gets pregnant by drinking the tears of the peacock Shortly after Rajasthan High Court judge Mahesh Chandra Sharma passed an order calling for the cow to be made the national animal, he came up with the unique theory that the peacock is the national bird as it is "celibate."

Justice Sharma's version on the mating habits of peafowls has it that peahens become pregnant by swallowing the tears of the peacock.

“Peacock is a Bramhachari and it does not have sex with a peahen. The peahen gets pregnant drinking the tears of the peacock. Even Lord Krishna carried the feather of a peacock on his head,” he said in an exclusive interview to CNN-News18.

"Peacock has pious qualities just like cow -- Peahen doesn't need to have sex to get pregnant, it just swallows 'tears' of the peacock" pic.twitter.com/unwucmOFLJ — News18 (@CNNnews18) May 31, 2017

Shortly afterward, Twitteratti exploded in tears - of laughter - with memes and clever takes.

What does the peacock say to the peahen when he is not in the mood? ``Pushpa, I hate tears" #RajasthanJudge #bramhacharipeacock — T S Sudhir (@Iamtssudhir) May 31, 2017 Union water resources minister Uma Bharti sent the Indian public into a tizzy after she said that the Uttarakhand floods were caused due to defecation by atheists near the Kedarnath shrine, reported Hindustan Times.

“As time passed, atheists came here, mainly for business purposes. This resulted in nature’s fury at Kedarnath in 2013,” said Uma Bharti. The "human excretion" from these atheists caused the flood. She said that excretion was prohibited in the natural boundary of the ancient temple. In 2015, Shankarbhai Vegad, a BJP MP from Gujarat asserted that dung and urine from cows are more potent than medicines and can cure deadly diseases such as cancer, reported The Hindu.

Pushing for a ban on cow slaughter Vegad said, "Cow dung and urine can cure cancer. Today, if someone has cancer, there is no cure for it; cancer is equivalent to cancel." “I am witness to it, cow dung and urine are a 100 percent cure for cancer,” he said, adding “if cow slaughter is not stopped, there will be no wealth of animals in the country,” he further stated.

However, American Cancer Society has a contradicting find.

"No well-controlled studies published in available scientific literature support the claims that urotherapy (urine therapy) can control or reverse the spread of cancer."

There are some individual reports of urotherapy's ability to stop cancer growth. However, available scientific evidence does not support claims that urine or urea given in any form is helpful for cancer patients. Two small studies done during the 1980s found urea did not cause tumors to shrink in patients with cancer in the liver. Union minister Satyapal Singh claimed that Charles Darwin's Theory of Evolution of humans was "scientifically wrong" and it needs to be changed in school and college curriculum.

Singh, the Minister of State for Human Resource Development, said our ancestors have nowhere mentioned that they saw an ape turning into a man.

"Nobody, including our ancestors, in written or oral, have said they saw an ape turning into a man," he said. "No books we have read or the tales told to us by our grandparents had such a mention," the minister added.

Darwinism is a theory of biological evolution that states that all species of organisms arise and develop through the natural selection of small, inherited variations that increase the individual's ability to compete, survive, and reproduce.

Breaking - Apes join protest against Darwin’s Origin of Species. They deny any involvement in the existence of certain homosapiens. — Farhan Akhtar (@FarOutAkhtar) January 21, 2018

Before the infamous Darwin comment, Satyapal Singh said that students in institutes like IITs must be taught about ancient Indian "discoveries" and "inventions" such as Pushpak Viman (flying chariot) mentioned in the Indian epic Ramayana, reported Hindustan Times.

10. Diseases like cancer caused due to sins committed in past lives People suffering from life-threatening diseases such as cancer is "divine justice" for sins committed in the past, Assam Health Minister Himanta Biswa Sarma said, drawing flak from different sections.

"God makes us suffer when we sin. Sometimes we come across young men getting inflicted with cancer or young men meeting with accidents. If you observe the background you will come to know that it's divine justice. Nothing else. We have to suffer that divine justice," Sarma was quoted as saying by news agency PTI.

"In this lifetime or in our previous life, or perhaps my father or mother... perhaps that young man did not do but his father has done something wrong. It is mentioned even in Gita, Bible about the outcome of one's actions. No point in being sad... all will get the outcome of this life's actions in this life only. That divine justice always will be there. Nobody can escape the divine justice that will happen," he said.

However, good sense prevailed, and he apologised later for his comment.

11. Cow only animal that inhales and exhales oxygen 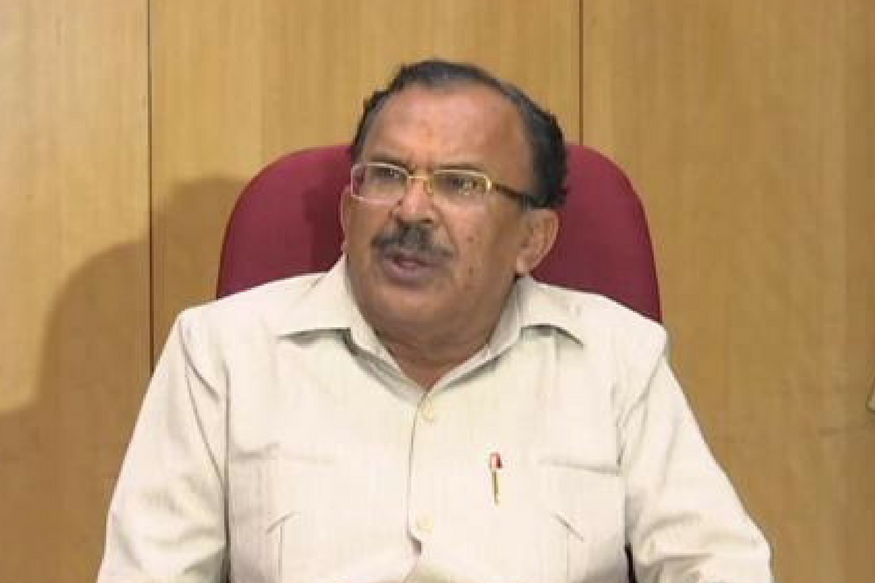 Taking scientific significance of cow to next level, Rajasthan's education minister Vasudev Devnani asserted that cow is the only animal which inhales and exhales oxygen, said several reports.

According to a report in Hindustan Times, Devnani also said that diseases such as cold and cough are healed if one goes near a cow, Devnani said at a programme organised at the Hingonia Cow Rehabilitation Centre.

Speaking during a programme at the Rajasthan University in Jaipur, said Brahmagupta-II discovered the law of gravity before Issac Newton.

"We all have studied that Newton gave the law of gravitation, but delving deeper, we can find that Brahmagupta-II came up with the theory of gravitation 1,000 years before (Newton). Why don't we include this fact in the curriculum?" Devnani asked.

In conclusion, we'd like to quote Congress President Rahul Gandhi.

"This morning, I got up at night."