Teenage climate activist Greta Thunberg has responded to US President's perceived mockery of a tweet by changing her Twitter bio.

Teenage climate activist Greta Thunberg has responded to US President's perceived mockery of a tweet by changing her Twitter bio. Just a few hours after Greta's impassioned speech at the United Nations Climate Action Summit, Trump had called her a bright and happy girl looking forward to her future. This was an uncalled-for jibe at the young activist, who had just accused world leaders of apathy towards climate change and had blamed them for stealing her childhood. But Greta did not take it lying down. And we're like:

In her speech, Greta said, "You have stolen my dreams and my childhood with your empty words and yet, I'm one of the lucky ones. "People are suffering, people are dying," she added.

She seems like a very happy young girl looking forward to a bright and wonderful future. So nice to see! https://t.co/1tQG6QcVKO

His comment did invite the wrath of Twitterati, who felt that the tweet was nothing was petty and vile. This is what some of them had to say:

She is brilliant, courageous, principled and internationally respected, things you will never be. Also, her speech put your farce to shame.— Howard (@HowardA_Esq) September 24, 2019

The President of the United States spends the day in the same place as a 16 year old girl who criticize his policies, does not speak to her, then tweets insults at her from his safe space. What a pathetic, ignominious troll for a president. #TOTUShttps://t.co/MV2ojhi3GB pic.twitter.com/WXoEUdrfYc

Is this your personal attempt at sarcasm, or did Stephen Miller come up with this one?— Duncan Jones (@ManMadeMoon) September 24, 2019

Even Mia Farrow had something to add:

Mocking any kid is disgraceful. What an awful example you set. Apparently it bothers you that she represents many millions of children throughout the world - demanding their rightful future.

But Greta clearly had the last word. Instead of replying to his tweet, she simply changed her Twitter bio to, "A very happy young girl looking forward to a bright and wonderful future." Take a look: 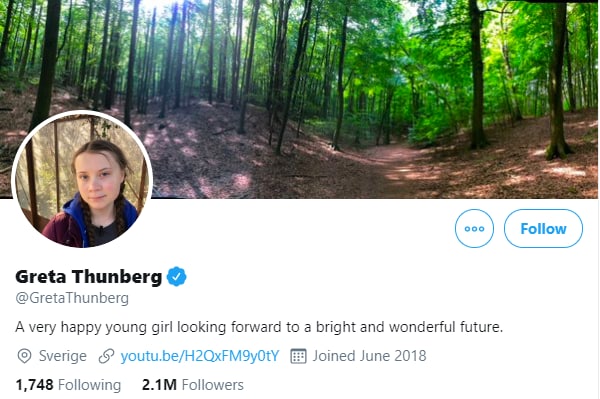 Ouch. That must've hurt. But as they say, silence is the best medicine.