A Month After Seelampur-Jaffrabad Violence, Women Claim the Streets to Protest Against CAA

Last night, women of all ages and walks of life including homemakers, students, teachers, service and business professionals left their homes with a candle in hand (many with a toddler in the other) to march through the lanes before settling down for their first all-nighter.

'CAA ke khilaaf, auraton ka inquilab' (Women's revolution against CAA) -- the words printed brightly on a pale blue banner spelt out the mood of Seelampur on a cold January night when hundreds of women and children had gathered to protest against the Citizenship Amendment Act, 2019.

Almost a month since violent clashes between Delhi Police and anti-CAA protesters left the residents of Seelampur and nearby Jaffrabad reeling under riots, arrests and property damage, protesters of the East Delhi neighborhood were back on the streets. But with one distinct difference - this time it is being led by women.

Last night, women of all ages and walks of life including homemakers, students, teachers, service and business professionals left their homes with a candle in hand (many with a toddler in the other) to march through the lanes before settling down for their first all-nighter.

Starting from 7 pm in the evening, the number of women swelled from 500 to about 700 by midnight as they sat on the Seelampur-Jaffrabad main road with candles and placards and vowed to not leave until the "despotic" Citizenship (Amendment) Act, 2019, was repealed.

For over a month, the country has been rocked by protests against CAA, National Register of Citizens (NRC) and National Population Register (NPR) - introduced by the Bharatiya Janata Party government to ascertain the citizenship status of those living in India. Critics have called the exercises unconstitutional and discriminatory on the basis of religion that, if implemented, could be used to target minorities in the country.

"The last time that people in our locality protested, the police cracked down with indiscriminate force," Najma, 48, a local woman who is part of the informal committee organising the protest told News18.

Following the violence in December which saw a police station in Jaffrabad burnt along with two buses, a magistrate court sent 16 men to judicial custody. 12 of them were released on bail on Wednesday against a Rs 15,000 bail bond each. According to television news on several mainstream channels, an outnumbered police had used tear gas shells and lathi-charged to quell unruly protesters. However, other news reports carried eyewitness accounts as well as alleged videos of cops using undue and indiscriminate force against locals.

"If the men come out and protest, they beat them up and arrest them on trumped-up charges. So now, we women have taken to the street. And we are not moving till CAA, NRC and NPR are shelved," she said adding that the government needed to assure them of the same. 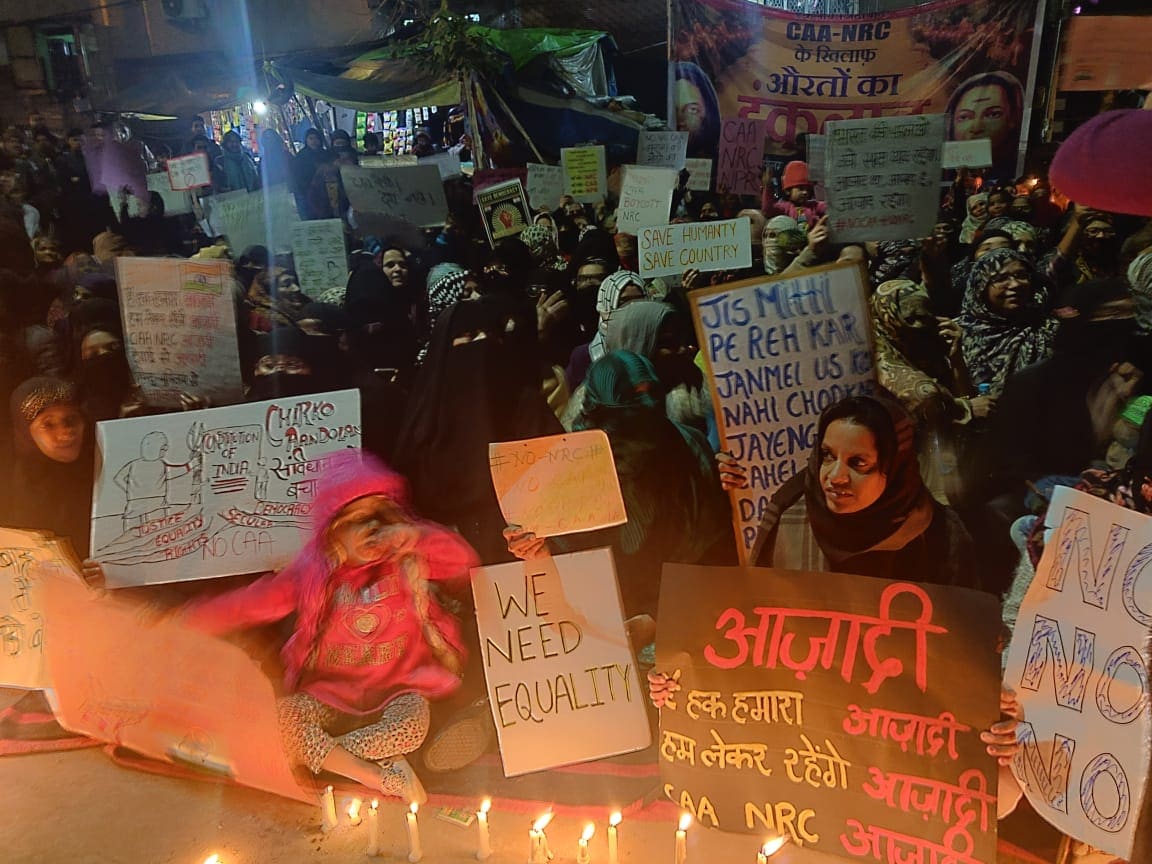 Najma also told News18 that preparations for the women's protest had been on since January 1st. "We have been taking out silent candle marches through the neighborhood for over two weeks now," she said. It was only when the number of women reached 500 that they decided to start the sit-in dharna.

The women were aided by members of Pinjra Tod, a platform run by Delhi University students in support of gender-neutral rules and women's rights on campus. They provided organisational support and essential legal information to the protesters. Even as the number of protesters including men who came to support their women relatives or just local passers-by swelled, the protesters managed to maintain calm and follow every rule set out by the police. (Men waited on the sidelines and some took care of infants while their wives, mothers, sisters, daughters and granddaughters protested)

As the night progressed, the palpable fear of police intervention increased. "We cannot allow women to sit on street all night without protection, it is a public safety issue," one of the cops told the organisers. They also claimed that the protesters were blocking traffic and causing a nuisance. Nevertheless, volunteers ensured traffic ran smoothly through tremendous crowd control. "The only thing blocking the road is the cops", one of the protesters joked in passing.

After 10 pm, the police again tried to intervene by asserting that microphones cannot be used after 10 pm. Ready for such eventualities, the protesters immediately turned the speakers off, continuing their slogans and songs sans mics.

At around midnight, two non-local women tried to enter the protest but were immediately suspected by locals to be cops in plain clothes. "Cops cannot enter protests in plain clothes, they have to show us their badges," Nikhat, 20, said. There were fears that the women could enter the protesters' section and cause trouble which can lead to police intervention. "That's exactly what they want," Nikhat added. "To move us on any pretext". As the protesters opposed the women's entry, the two eventually quit their attempts and were later seen sitting inside the police van, confirming the doubts of the protesters.

It was only when advocate Mahmoud Pracha, who recently secured conditional bail for Bhim Army chief Chandrashekhar Azad, arrived at the protest that the worried protesters breathed a sigh of relief. Pracha spoke to the protesters and offered his legal services, and even gave his number that can be called on at any time for legal assistance and advice.

Upon the arrival of Pracha, cops slowly started to diffuse and disperse. (Mahmoud Pracha's presence breathed a sigh of relief among protesters.)

As the women settled in to sit for the night, many got chatty. Holding posters of BR Ambedkar and slogans against the Narendra Modi government, the women spoke about how quickly they finished their chores to come to join the protest and how even the men in their orthodox homes were only too eager to let them go. But not one complained. Children danced about happily as the women raised slogans of 'Azaadi' and not just from CAA but from a host of issues that plague women (and men too) - patriarchy, lack of public safety, lack of equal opportunities, poverty and employment. 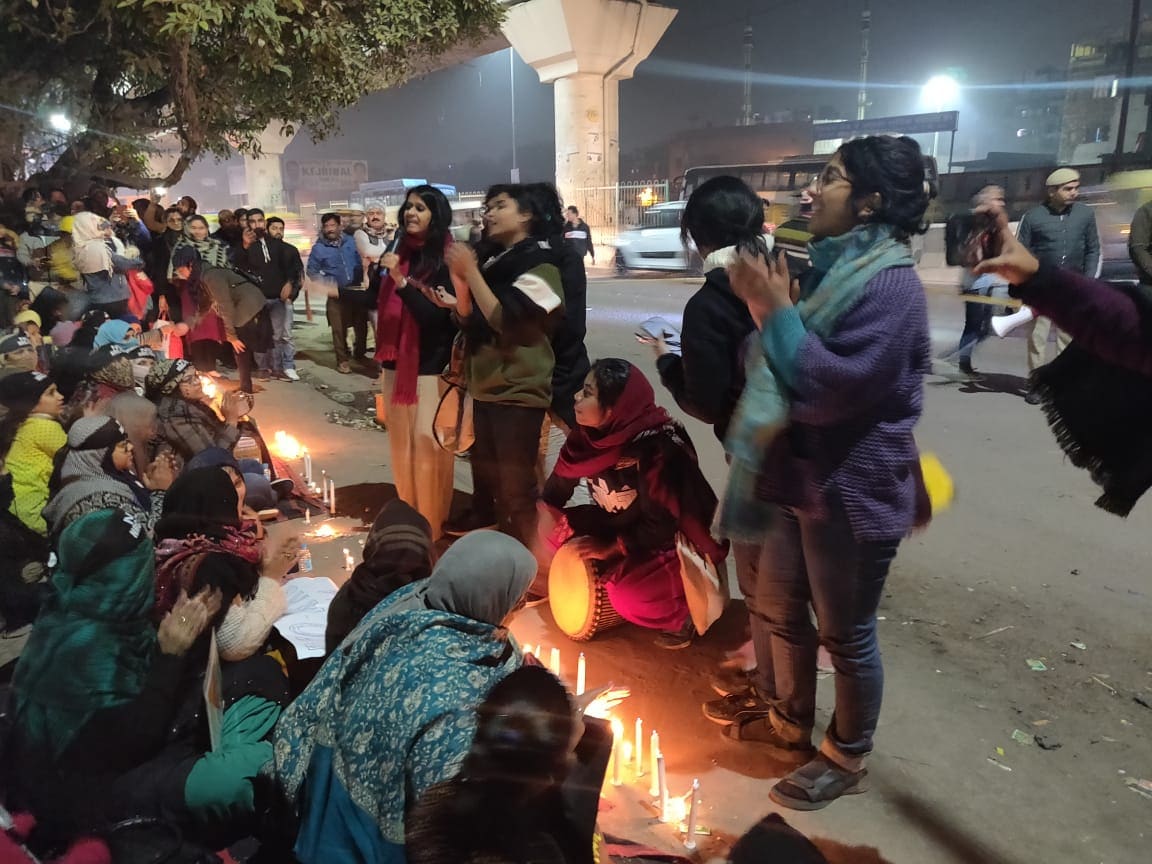 (Money for food, mineral water and refreshments was raised by locals themselves as residents of each lane took up specific responsibilities and shared costs. Locals as well as students of Delhi University also helped raise donations for mattresses, tents and loudspeakers.)

"Many of us had been going to Shaheen Bagh," Alfia further told News18. "It was impressive to see so many of them turning up every night to protest. We thought, why can't we do the same?"

The fact that women in Shaheen Bagh were braving the cold every night and images of the defiant girls of Jamia standing up to police brutality also brought out that zeal in the women of Alfia's neighborhood.

The 27-year-old homemaker and resident of Jaffrabad felt that this time, the issue was universal. "We are aware now, we are reading newspapers, following different news channels. We know what is happening," she said while munching on rice served to all the protesters. This time the matter affected every Indian and that is why people are taking to the streets. "If CAA, NRC and NPR are implemented, we will be on the road anyway," she said.

Meena Ahmed, a 53-year-old protester, is suspicious of journalists. "Are you also going to say that we protesters don't know the meaning of CAA?" she asked casually, narrating how journalists often came and held discussions at length with them, only to later quote them out of context in order to furnish half-truths. (The women plan to contiinue the protest until the government 'takes back' CAA.)

However, to some, what stung more than the media's "betrayal" was the "betrayal" of Arvind Kejriwal. Even as most of the residents of Seelampur-Jaffrabad said they favoured Aam Aadmi Party over Congress or BJP, the fact that he remained missing from protests came as a disappointment to many. Nevertheless, some like Alfia and Nikhat still had hope. "Kejriwal did raise his voice against CAA. But he too has an election to win now and probably that is what is preventing him from coming all out in support of us," she said.

However, she cautioned against the apathy, claiming that while the minorities of the country may yet weather the storm and survive, politicians who support divisive politics and neglect minorities will not in the long run.

Meanwhile, the Delhi high court on Tuesday said the police has the power to control traffic wherever protests are going on and directed it to look into a plea against restrictions on Kalindi Kunj-Shaheen Bagh stretch which has been closed for a month due to agitations. Do the protesters of Seelampur worry about police removing them? Pat comes the reply from a 65-year-old grandmother attending the protest with her 4-year-old granddaughter. "Not at all. Now we are not scared. Jo hoga, hum dekhenge (Whatever happens, we shall see)."