The 'Marine Cemetery' located at the estuary in Kozhikode in Kerala which opened its gates on 4th December, World Wildlife Conservation Day, has an important message: Our world is dying.

At meeting point of Chaliyar river and Beypore beach in Kozhikode stands a cemetery. But unlike most cemeteries built for loved ones who have passed away, this one is slightly different - it is a cemetery dedicated to marine species which are slowly going extinct, owing to plastic pollution.

The 'Marine Cemetery' located at the estuary in Kozhikode in Kerala which opened its gates on 4th December, World Wildlife Conservation Day, has an important message: Our world is dying.

"'It's just one bottle,' said 7.8 billion people,"' is how climate change activist and traveler, Aakash Ranison likes to explain the problem of individual accountability.

'Marine Cemetery,' consists of 9 gravestones with a tombstone made of iron frame and plastic-body has the names of the soon-to-be-extinct or critically endangered aquatic life on them. The 4 x 3 feet gravestones were created by the Jellyfish Watersports, and of climate change activist and traveler, Aakash Ranison.

The plastic used for tombstones are all non-recyclable, explains the founder of Jellyfish Watersports, Kaushiq Kodithodi in an interview to News18.

Collected over two months, Jellyfish Watersports encouraged their patrons to go out kayaking and return with plastic bottles in September. A further beach clean-up drive was initiated in November, at Beypore. About 800 kgs of waste was collected - out of which 2,000 were plastic bottles. The beach clean-up drive took place with the support of Calicut district collector Sambashiva Rao, who heads the Clean Beach Mission, and MLA VKC Muhammed Koya.

Single-use plastic itself is very difficult to eliminate from the environment, and gets even more difficult when its present in water. It chokes the aquatic ecosystem, effectively killing off marine species. One such species, native to the Chaliyar river, is the 'Miss Kerala,' which risks extinction because of plastic pollution.

"The point of making it into an art installation which connects with the people, is to make them aware about something that affects them. In this case, the fish which has sentimental value, will prove the point more than a 'Save the beach at Beypore' sign would," Ranison tells News18. "It's relevant to the location, and hence, will get their attention." 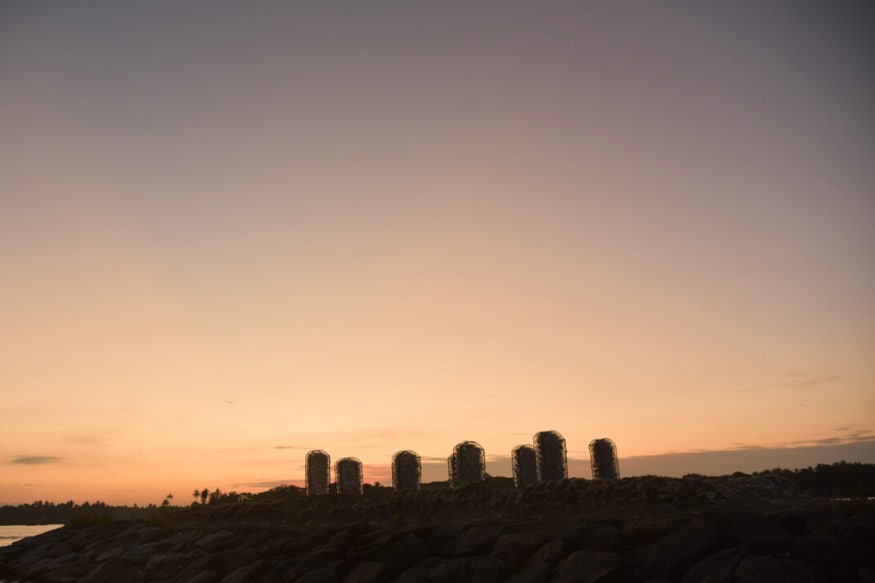 The structure took Ranison and the team working with him over 24 days to build, and he had to come up with new modifications each day to deal with the plastic staying there despite the harsh sun, strong winds and close proximity to water. "We couldn't risk it going back in."

"When our roads have potholes, the first to complain would be the motorists. The same rhetoric applies to our water bodies. Kerala is known for its scenic rivers and tourism industry based on our water bodies, but these same water bodies are littered with plastic," explains Kodithodi.

The cemetery itself is movable in nature as it is built onto a platform after which its foundations are placed into the earth, explains the brand strategist of Jellyfish Watersports, Tarun Gupta. "We've gotten requests from Cochin and other places to put it on display there."

So far, they have acquired a permission from District Administration and the Beypore Port Department, Kozhikode to have it at the current spot for six months.