A Train From Bihar's Darbhanga to Delhi, Decked in Mithila Art, is Set to Run Today

The train set to arrive in Delhi on Thursday is a visual treat, Indian hand-painting style.

Indian Railways is slowly progressing to making its services better - in all ways possible. While it is doing things such as slashing AC prices, it is also making an attempt to make the train coaches more visually pleasing.

Earlier, in May, Indian Railway coaches got a makeover, primarily aided by National Institute of Design, Ahmedabad.

Now, the Bihar Sampark Kranti Express which is set to hit the tracks on 23rd August from Darbhanga in Bihar has a new visual to offer. 9 coaches of the train are painted with Mithila Art.

The train, which is set to arrive in Delhi on Thursday, is illustrated with what is known as 'Madhubani art.'

Madhubani art originates and is practised in the Mithila region of Bihar. Painting of this style is done with fingers, twigs, brushes, nib-pens, and matchsticks, using natural dyes and pigments.

The train coaches reflect this. 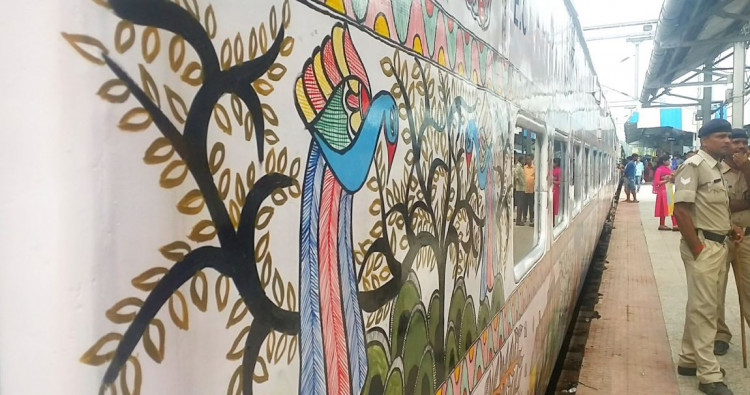 Madhubani Art is famous primarily for its eye-catching geometric patterns and intricate detailing.

The subject of paintings differ, but usually are ritual content for particular occasions, including festivals, religious rituals, and the like. The images are either of people offering prayers or plants and animals. Traditionally, the colours used for Madhubani paintings are usually derived from plants and other natural sources. The colours schemes used are often bright and very visually appealing.

And the train set to run from Darbhanga reflects just this - a beautiful example of Indian art.

The train is set to arrive in Delhi, the nation's capital today.

While what this train will encompass and how well it will function is still something we will have to wait for, but for a first, the art is a beautiful reflection that trains in the Indian Railway system can be beautiful, instead of a boring blue and white.