What a rollercoaster ride, this story was!

For those who don't know, casting couch is basically a system where opportunity or incentive is given to a person in return for sexual favours. And nowhere is this system more prevalent than in the film and entertainment industry. Bollywood especially has a long history of casting couch stories and scandals and despite all the negative attention it has garnered over the years, it is still very much a thing.

Recently, in a session with Kommune India, actor Tisca Chopra of Taare Zameen Par and Firaaq fame opened up about her Bollywood casting couch experience.

The incident she recalls is shortly after her debut release and she was out of work, so when she received a call from a famous producer and director, she readily jumped onboard. What she did not know then and what she was told by a lot of people was that agreeing to do a film with him was basically agreeing to be his "bed squeeze" for the duration of the shoot.

Chopra recalls her internal conflict of choosing between work and dignity and just how she planned to escape this fate when it came upon her. 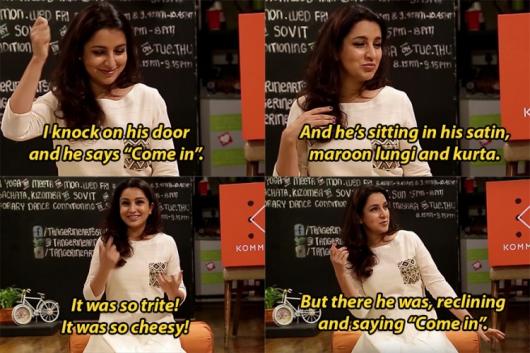 As an afterthought to the story, she adds that she is so very glad that more and more directors and casting directors are gay now, so that everyone gets to know what a casting couch feels like. Yes, Tisca Chopra, you are awesome.