Union Minister Nitin Gadkari was seen riding a scooter without a helmet as he was entering the RSS headquarters in Nagpur.

Dinesh Madan, a resident of Delhi, was recently fined a challan worth Rs 23,000 by Gurugram Police for flouting several rules.

If you do not know it already, the Ministry of Law and Justice under the Government of India has recently passed new Motor Vehicles (Amendment) Bill, 2019. In layman terms, traffic violators, in most cases, will now have to pay steeper fines than ever before.

Since the new rules were put in place, traffic cops all over India, have taken to social media to educate citizens about the importance of following them.

While the post was tweeted in a jest to add to their ongoing quirky hashtag #ThingsWeShouldCancel, the Maharashtra Police tweet was used as an opportunity by Twitterati to take shots at a minister for violating traffic rules. The minister in question is the current Minister for Road Transport & Highways of India Nitin Gadkari. Twitter user @RoflGandhi_ quoted the said police's tweet and in a seemingly sarcastic post wrote that the new traffic rules shouldn't be applicable to only ordinary citizens.

The user didn't stop at that and went ahead by starting an online petition for others to join in and to have Nitin Gadkari "penalised" for not wearing a helmet while riding the scooter.

"Current Transport Minister Mr.Nitin Gadkari was seen driving a scooter without helmet. As he is making stricter traffic rules, he must lead by examples and should follow traffic rules himself. Let's ask Maharashtra Police to tissue him a challan for this offence," the petition's description read. 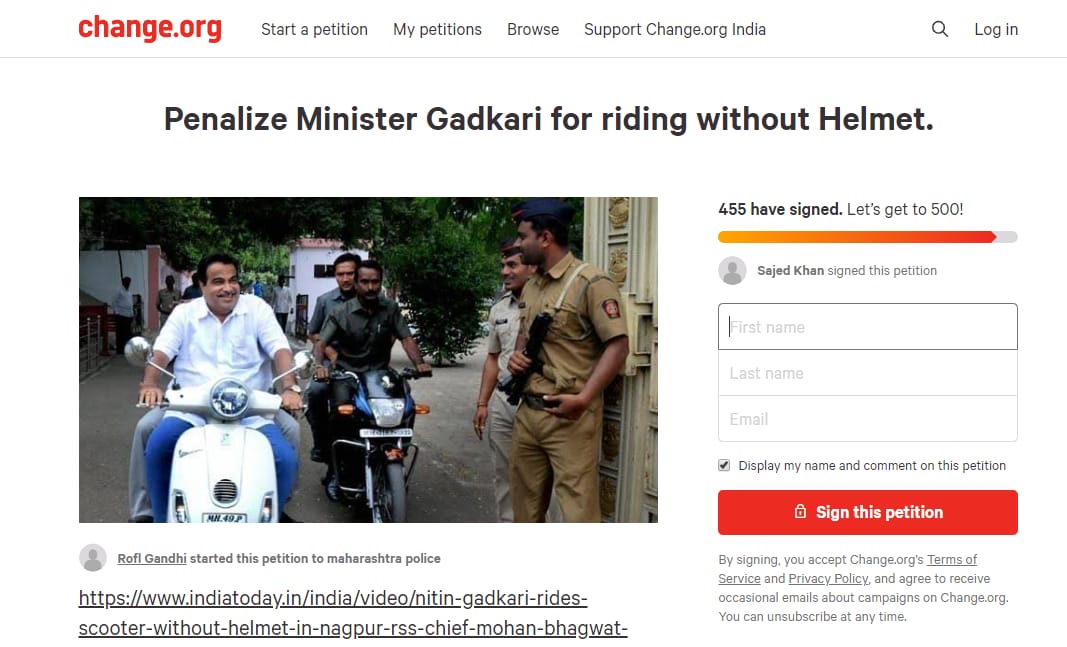 The photo is dated 2014 when it created a social media uproar as Gadkari was seen driving to Sangh building in Mahal in the eastern part of Nagpur to meet Rashtriya Swayamsevak Sangh chief Mohan Bhagwat.

So did he pay fine in 2014 for this traffic violation?

The implementation of new traffic rules has been best expressed by social media with memes and helmet jokes in particular.

Me and my friend trying to bargain with the traffic cop. #TrafficFine pic.twitter.com/kiNzW7bSBy

Sachin Tendulkar was right, you folks. "Wear helmet at the back also."