Angry Indian cricket 'fans' wanted to teach Australian skipper Tim Paine a 'lesson' for messing with their team after the famous Gabba win on Tuesday. But they ended up targetting someone else instead.

Cricket often brings the best and worst out of its fans. Tuesday saw both. It was a day for Indians to celebrate as a depleted yet spirited squad of youngsters led by a capable captain Ajinkya Rahane showed immense character and hunger for victory on the last day of the last Test against Australia at the Gabba.

Riding on Rishabh Pant’s unbeaten knock of 89* with an invaluable 91 powered by opener Shubman Gill, Indians chased down 328 on Australian soil, broke the host’s long-standing record at the fortress, and retained the coveted Border-Gavaskar trophy with a memorable 2-1 win.

As social media erupted in joy upon witnessing a young side script a memorable win at the Gabba with Pant hitting the winning runs, several cricket fans including injured Ravichandran Ashwin’s wife Prithi Ashwin was immediately reminded of Australian captain Tim Paine’s bitter exchange with the spinner and her husband in the previous match at the SCG.

SEE YOU AT THE GABBA MATE.

A frustrated Paine started the chatter telling Ashwin he couldn’t wait for India to come to the Gabba. Come Tuesday, Indians mocked Paine and “Come to Gabba”, the words uttered by the wicket-keeper batsman, came back to haunt the Aussie skipper after India’s win in Brisbane. The banter from the Indian contingent on social media was healthy and even hilarious at that.

Then came the ugly part. Abusive cricket “fans” from India then headed over Tim Paine’s Instagram account to barrage him with the choicest curse words to remind him how he was wrong in messing with this young Indian side.

There was, however, a minor blip.

Blinded by their hate, the “fans” targeted Tim Paine, yes, but it was neither the Australian skipper nor he had anything to do with cricket.

The Tim Paine they chose to attack is from the UK and his name is Tim Payne with a y in his last name.

Nonetheless, the angry public gathered under one of Tim Payne’s (not the Aussie) photograph and flooded the comments section with abuses. It’s worth reminding, the Indians not only got the Insta handle wrong but the person who was in the direct line of social media attack looked nothing like the Australian skipper they were after.

Also Read: Pakistani Fans Forgot About Rivalry and Cheered For India’s Win Against Australia on Twitter

“As IG has mistaken me for him and he doesn’t seem to have socials I receive all the backlash for his antics against India. Over 600+ message requests and constant spam on my comments of my photos,” UK’s Tim Payne wrote. Although barraged with the misdirected backlash, Payne was rather chill about it and shared some snippets on his Instagram story. He also claimed he had received over 600+ direct messages on the app during the crossfire. 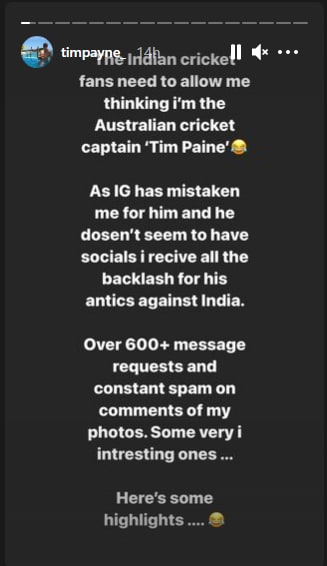 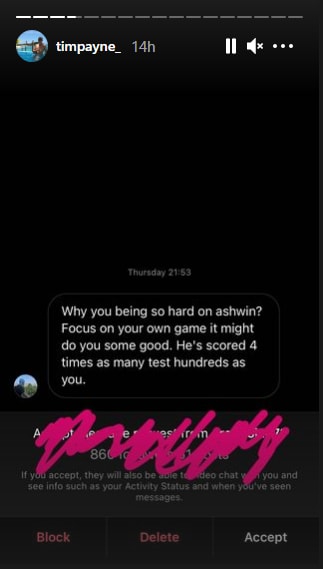 Payne also added that he had inadvertently become the most hated person in India overnight. There were some nice folks from India who did apologise to Payne for the goof up and the hate that he subsequently received for no fault of his own.

Payne eventually had the last laugh as he photoshopped himself in Australian Test outfit. Alas, Tim Payne became Tim Paine.