Depression can be a devastating illness for those suffering from it. There may be days when one may not want to leave the safety of their bedroom, days where they wouldn’t want to interact with people, and days where they would not have any motivation to go on with your life. Such days couple repeat themselves endlessly until one becomes completely unable to extricate themselves from the pain.

It’s tough, yes. And it only gets tougher when one is all alone in this fight and there is no one to help them or even say mere words of motivation, causing utter hopelessness and abject dejection.

But often, simple words of kindness and/or motivation can really boost someone’s confidence and motivate them to pick themselves up and gather all the pieces.

Recently, Ali, who goes by the name u/0770059834333178 on Reddit messaged Hollywood superstar Arnold Schwarzenegger, asking the actor to “get off my lazy a** and hit the gym”.

To Ali’s surprise, Schwarzenegger actually responded to his message. 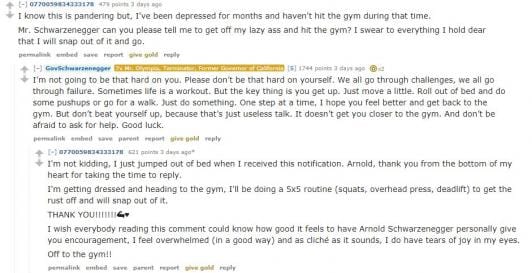 Ali, who was obviously surprised to receive a reply from the Terminator himself, said that he immediately jumped out of bed after reading Schwarzenegger’s reply and was “off to the gym”.

Ali, who lives in Quebec in Canada, told the BBC, "I was just lying in bed and feeling down, when I decided to send the message. I had been feeling bad for about three months."