Selfies, Autos, and Clothes on Balconies: Artist Couple from India, Pakistan Shows How Similar the Two Countries Are

Mustaali was born in Delhi, India and Minahil in Lahore, Pakistan. They say that this moment of epiphany dawned on them more intensely when they saw the Lahori Gate in Delhi and the Delhi Gate in Lahore.

She may have been talking about the seething tensions, but Pakistan and India, the enemies on and off the cricket field and neighbours in geography, are starkly similar. An artist duo Mustaali Raj and Minahil Bukhari have attempted to show that similarity through their endeavour, the Line of Control project.

Mustaali is a graphic designer whose work revolves around visual communication and Minahil, a visual artist, is a Master of Fine Arts candidate at Simon Fraser University in Vancouver, who is deeply involved in personal narratives of displacement and diaspora. They met each other through friends in Calgary, Canada and fell in love instantly.

The couple, married for almost four and a half years now, had a deeply personal reason for embarking on this project. Mustaali was born in Delhi, India and Minahil in Lahore, Pakistan. They say that this moment of epiphany dawned on them more intensely when they saw the Lahori Gate in Delhi and the Delhi Gate in Lahore.

In the summer of 2018, after months of planning this elaborate adventure, the young couple visited their birthplaces together and then to other parts of their countries to trace the intricate similarities between two cultures which have been instructed to be different for almost seven decades now.

The website was launched about a week ago. Even though the project speaks of political minimalism after its completion, their journey was as far from it as possible.

A self-funded venture, the duo had to battle visa troubles and time constraints to interpret, in their own way, the “de facto border” as a means of reimagining this imaginary boundary and open up dialogue among ordinary citizens of the two nations.

The project is now open to photographers and anyone interested in manually bridging gaps between India and Pakistan through art, a realm still untouched by political turmoil. Mustaali and Minahil spoke to News18 to discuss the project, entailing the love and hate between India-Pakistan, visa troubles, patriotism, borders and art. Here are edited excerpts from the interview.

What inspired you to take on this project and name it LoC?

Mustaali Raj: When we first thought of the project, a representation of the physical similarities between the two countries came to our minds. We wanted to take it and use it as a visual metaphor of the line that bridges both countries. It is up to the user to interpret what the line means by physically moving the LoC on the website. The division then becomes a tool for you to see both sides, India and Pakistan and see how we are not that different. This project goes beyond just architecture and food, it focuses mainly on people.

Minahil Bukhari: It’s a very politically charged phrase and we decided to break it down. We wanted to give the user autonomy. It is an empowering gesture. It has been in our minds for the past eight months (before the LoC project took shape) and we wanted to go with this name because the actual physicality of the website as well as the implication of the phrase fit perfectly. Then in the summer of 2018, we did the trips together. We went to India first and then after a month and a half we went to Pakistan for a month. So we got the images over 3 months.

Did you have an idea as to what this project would look like when you first started out? Or did you improvise as you went?

Minahil: It was easier for the architectural shots because I was born in Pakistan and I could tell that a particular place might have similarities in India. Other shots like the portraits and selfies, for example, were a surprise for us too. Little things surprised us because the behavioural patterns in both countries are the same too! For me, the most interesting shots are those of the cars. The Pakistani one has the Tasbeeh, the little Quran and Pakistan’s flag attached to the car’s rearview mirror while the Indian one had the Hanuman and Ganesh sculptures.

Those pictures say so much about rituals across the border, a gesture of protection in your car. They believe in the same concepts of protection and being blessed by deities and Gods. Even the pictures of clothes hanging from balconies in the same way and the animal shots left us awestruck. The beauty lies in the fact that the pictures are not a 100% exact and yet you feel like they are paired. There is something so beautiful about the fact that you can see the slight differences and also the union of their differences as well.

Mustaali: Also, picnics! When we saw open spaces and families hanging out in both places, it added to our perception of how similar they actually are! The auto-rickshaws and truck art…all these visuals went along smoothly. What are some of the challenges you faced?

Mustaali: I was born in Delhi but grew up in Canada where my social circles were primarily multicultural. There were underlying sentiments sometimes from my extended family where they seemed to perceive Pakistanis as something very foreign and Pakistan as a very different land. However, that was not the case based on our interactions with other Pakistanis living in Canada. We took this trip in July and August during the monsoon, which also posed as a challenge. The visa process for Minahil was even more difficult.

Minahil: It took me about three months to get my Indian visa processed, even though I am a Canadian citizen. My passport says that I was born in Lahore, so that made things a lot harder. I had to get several checks done and acquire sponsorship letters. His was a lot simpler because his visa took just about a week. Another challenge was that we did not know what kind of shots we would get in each country, so we ended up capturing a lot of photos hoping we would find their counterparts. In the end, we had to go through a lot of shots to make them fit seamlessly.

How similar do you think India and Pakistan are after this project?

Mustaali: We thought that there was also a lot of connection and history between Delhi and Lahore. They are so similar it’s almost poetic. In terms of food, anything you find in North India, you’ll find in Pakistan like naan, biryani, kababs and dals. The flavours are similar. South Asian cuisines that are available in India are also found in Pakistan. There are cafes with Chinese and Italian food cropping up in Lahore, Islamabad and Karachi just like in the metropolitan cities of India. A lot of parallels can be made in the art scene as well.

Minahil: We also did another project called Birds of a Feather which has the same theme, celebrating differences but belonging to the same flock. We only worked with the tota. It is an iconic bird of South Asia. The friendly bird is vibrant, colourful and curious. It doesn’t really have any boundaries, moving from one place to another without restrictions like the ones we impose on each other as people.

We wanted to use that as a visual metaphor to bring people together. We got not just family but also strangers to draw a parrot on a postcard. Then we connected with a few other in India and Pakistan, conducted an art show and received around 175 participants. We interacted with a lot of people with this as a great conversation starter. They were curious as to why we were doing this project and asked us more about the people in the two countries in general, giving rise to very interesting conversations. How does art help nations transcend national boundaries and enter into a realm where unity prevails?

Minahil: The purpose of art is not necessarily to give answers but about asking the right questions and that is what makes art relevant. It gives you the opportunity to think for yourself. It’s not spoon-feeding you any ideologies or ideas. It gives you the chance to make up your own mind. That to me is a powerful and beautiful thing to be entitled to. Those who engage in art and take an interest in these conversations are intelligent people and their point of view matters in comparison to those who follow what they are told to. Nothing is progressive about feeding and consuming ideologies.

Mustaali: Expression can be done through the different art form and the aim is to engage. The creative process can take any form, be it drawings, shapes, music, theatre and other performative art forms. It brings a lot of like-minded artists together.

Do you think art and patriotism are mutually exclusive?

Minahil: What is patriotism, really? Your love for your country, right? There are a million ways to express that through art. We need to first define patriotism before using it as a tool to degrade other nations. You can still love your country and your identity without bringing someone else down. The subcontinent is such a beautiful place where diversity has been celebrated for centuries.

Mustaali: I do not think so, because when you are celebrating something good in your country through your art or you are trying to prove something, it sometimes becomes a touchy topic. If people start having conversations about things that maybe do not align with whoever is in power or has the authority, you are labelled as something who is not really patriotic. In a way, if you are trying to improve people’s lives and your nation, whether that could spark negative sentiments, is actually a positive social change to bring about. 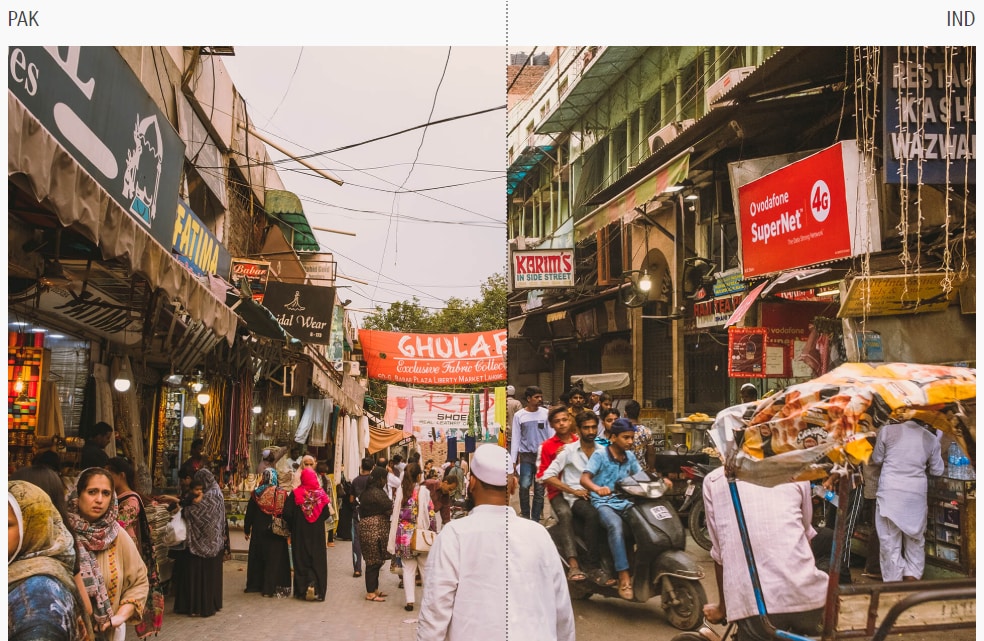 Minahil: Censorship can be a major obstacle for creativity. Art is the most benign yet powerful conversation-starter but censorship can potentially muddle with the artist’s vision and take away from the actual concepts behind the work.

Mustaali: Censorship can sometimes create more tension than resolution. Connections between countries can be established in so many ways but hate is not one of them

Any future projects planned around India-Pakistan?

Mustaali: We would really like to continue with this endeavour and go to the South of India and the north-east, Sikkim for example. Someone who is working with virtual reality has reached out to us and we would like to explore a lot of different avenues now.

Minahil: I am not sure if I will get a visa again but I would love to explore India more!
Tags: