Baadal Nanjundaswamy who is on a mission to highlight Bengaluru's pothole problem has come up with yet another masterpiece.

As IT City Bengaluru grapples with its nearly 16000 potholes, well-known artist/ art-director Baadal Nanjundaswamy took to his favourite hobby -- pothole art -- yet again on Friday morning.

He choose a water-filled pothole in the Central Business District in Bengaluru to create some art -- creating an artificial pond and a live model -- Sonu Gowda -- posing as a mermaid.

Bengaluru has seen its wettest September this year in nearly a decade, and the rains have continued well into October. Baadal chose, for his art, a prominent intersection near the Parade Ground, just a stone's throw from the bustling MG Road, where he created this pond -- this particular pothole has been water-logged for nearly a month and been a traffic-stopper every day. The pothole art, of course, made it another traffic-stopper during peak hours on Friday morning, with office-goers gawking at the mermaid on the streets.

Over the last few years, Baadal has become popular as an artist who takes time off to do street art that draws the attention of civic authorities to the state of bad roads and unplanned infrastructure woes. Two years back, he had brought in a model of a crocodile on a particularly watery stretch -- getting civic authorities to get cracking on road repairs on that stretch within 24 hours.

This month, the worsening road condition has left the city angry and helpless, with even arterial roads torn apart after incessant rainfall. Four deaths have been linked to accidents that happened due to bad roads, and the government has only just given ultimatums to the civic agency to take up repairs on a war footing -- though that has not been possible as continuing rains do not allow repair works; all asphalting and filling of potholes gets washed away in a few hours and civic officials say they are equally helpless. 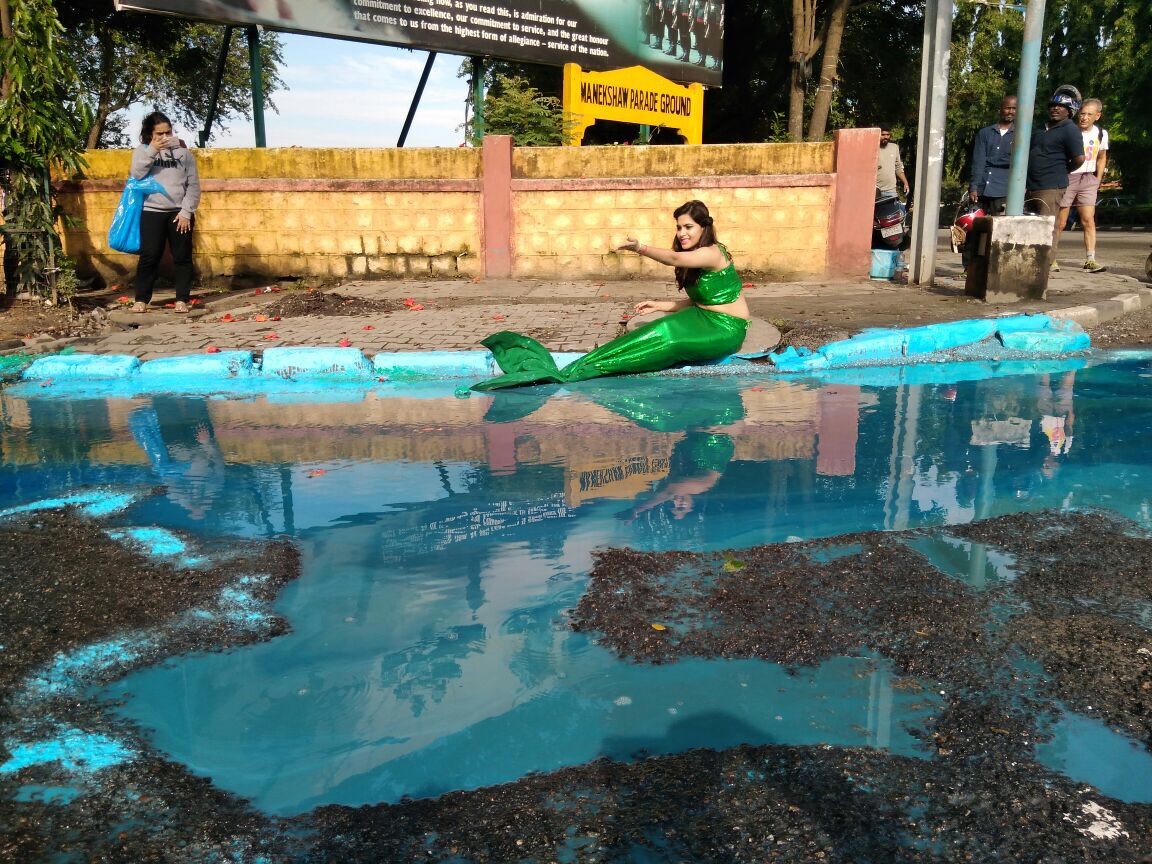 Nanjundaswamy has made national headlines in the past with his pothole art. He had also drawn a butterfly net around a pothole in the city in 2015. Baadal Nanjundaswamy who is active on microblogging site Twitter actively shares his art highlighting the pothole problem in Bengaluru in a hope to bring it to the authority's attention.