Moments before the toss, Kohli was snapped donning Indian blazer in a unique pose that captured the attention of BCCI's official Instagram handle.

Indian skipper Virat Kohli may have scored his lowest against New Zealand in a Test match on Friday but that hasn't stopped fans from swooning over him.

Moments before the toss, Kohli was snapped donning Indian blazer in a unique pose that captured the attention of BCCI's official Instagram handle @indiancricketteam, who shared the photo and asked fans to do the rest.

"Let's put on our thinking caps and caption this?" BCCI wrote along with Kohli's picture. "The best one will feature right here. Go.Go.Go"

Let's put on our thinking caps and caption this? The best one will feature right here. Go.Go.Go #NZvIND

Fans, armed with hilarious captions, united on Instagram to give their takes.

"Everyone is a Gangster until a real Gangster arrives," chimed in another.

And the comments kept pouring in. 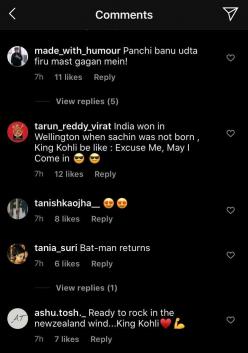 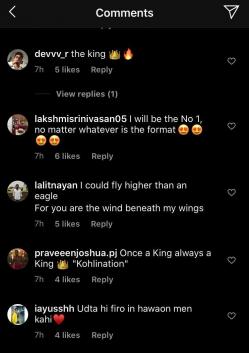 This was when Indian star cricketer Shreyas Iyer joined the party and took the cake in the caption contest. 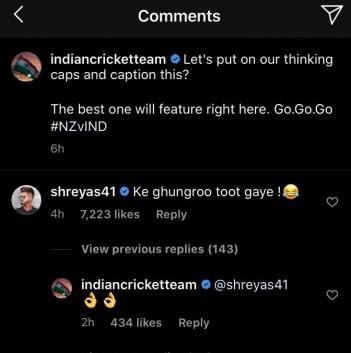 Coming back to Wellington Test, after losing the toss and put in to bat first, India were in all sorts of trouble after losing opener Prithvi Shaw (16) in the 5th over to Tim Southee.

Kiwi pacer Kyle Jamieson had a dream debut as the 25-year-old pacer removed the dangerous wicket of Cheteshwar Pujara for 11 and followed it up by removing Indian skipper Kohli for a score of 2.

Virat Kohli scored 2 runs today. It is his lowest score against New Zealand in Tests. His previous lowest was 4 (at Auckland in 2014).#INDvsNZ

Ajinkya Rahane did show some resistance in his 38* (122) before the match was called off for the day owing to rain. The play will commence at the same time on Saturday but 98 overs will be bowled in the day.