Board of Politics? 'The Poll' is a New Game Launched Just in Time for Elections

'The Poll' aims to educate citizens across India on elections while keeping as close to reality as possible.

It wasn't long before the rule book was thrown out of the window. Not because there wasn't actually a set of defined rules, but because that's how politics is in the land of India.

27-year-old journalist Abeer Kapoor has been covering elections, all over India, for a number of years now. It was during the Karnataka elections though, that Kapoor started to work on the idea of an election-related board game.

In December last year, I got to join in on one of the various playtests, that have been held across the country, to understand what it was all about. From a schoolmate I hadn’t met in a long time, to a journalist I met at a party back in 2015, the group that showed up was pretty diverse. This particular playtest was held at the Delhi office of Friedrich Naumann Foundation for Freedom (FNF), the organization behind SIM Democracy, an election-based card game in Thailand. We all quickly discovered that this board game is a first of its kind, anywhere in the world. 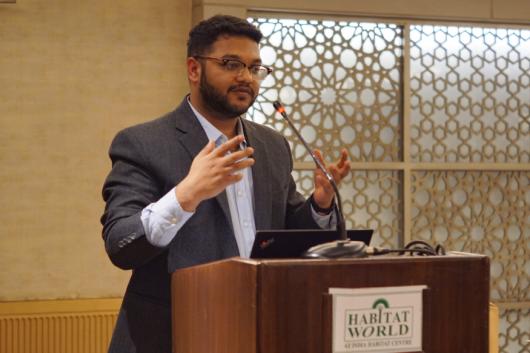 Designed by Kapoor and developed by Seeking Modern Applications for Real Transformation (SMART), with initial funding coming from FNF, The Poll aims to educate citizens across India on elections while keeping as close to reality as possible. The board game was launched in New Delhi on January 23rd, well ahead of the upcoming general elections. “It is to get conversations going about things that matter,” Kapoor said at the launch. If fake news, riots, caste tensions, horse trading, and similar topics tickle your fancy, then The Poll board game is for you.

The game may seem simple yet fun, but do not mistake this for a board game you can take to a party full of unsuspecting people. The learning curve is steep enough quick fix of fun at a casual evening get together. Those willing to give it a few rounds before they got into the swing of things were swiftly rewarded, as our group realised.

Keen as people are on indulging in election talk, most shirk from wanting to be politicians. The Poll gives you a chance of doing just that. Each player acts as a party (they can come up with creative names) and builds a manifesto by picking “policy cards” out of a pile. These policy cards, in turn, allow one to make campaign promises which the players have to defend.

If the majority agrees with their promises, the player gets to keep cubes on top of that constituency, signaling their ‘influence’ on the ground. Along with resources like money, the parties utilize campaign strategies to win over their constituencies. Even after having understood the game and being an informed journalist, I wasn’t able to wield any influence, during the manifesto stage. I just couldn’t sell my party’s promises to my fellow competitive players! I thought all was lost. Little did I know that things could turn 360* during the campaigning phase. Brutal, as some would describe it.

In the midst of campaigning, players spend their money (each party is given equal wealth at the start of the game) in order to play certain cards that boost their influence or nullify others’ influence. While the other three players went for constituencies where they already had a certain number of cubes, I put all my eggs in the constituency with the most seats in parliament. I threw a curve ball at the other parties.

The goal of the game, as in elections, is to win, no matter whether anyone remembers your campaign promises or not. Caste and religion come up during the campaigning phase as there are a number of these cards that can take the elections towards an interesting turn.

While it’s the player with the most constituencies/seats they have won in parliament who ends up winning the game, the idea was to leave it open ended, just as in reality. The makers of the game expect a number of players to jump in and form alliances. It’s kind of - “you help me and I’ll return the favour” scenario.

I met a fellow playtest participant, who had beaten me then, at the launch. As I reached for the rulebook, I turned to him and asked, “have they added the word alliance anywhere in the rule book?” That was the only way I could have won by heading the largest coalition. Alas. They hadn’t. There is no mention of the word ‘alliance’ in the rule book. 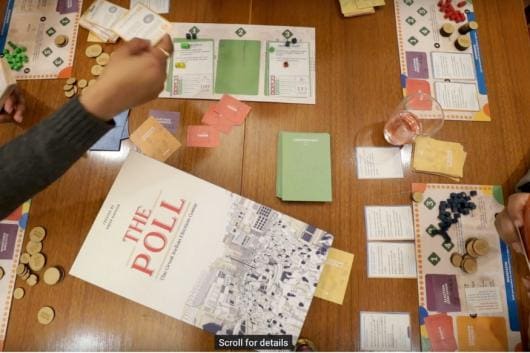 In an age where even vegetarians are glued to their smartphones trying to win “Chicken Dinner”, The Poll brings players face-to-face around a table, arguing about positions that they may or may not agree with. Unlike internet/gaming trends, The Poll isn’t likely to fall out of favour but PUBG will.

There are no barriers to entry. The Poll can be played between three to four individuals (or six to eight, if played in pairs). More the merrier. At the launch, Kapoor and his team said that they are working on a two-player version for the bipolar fights that take place across the country and around the world.

This board game serves as a template that can work anywhere. In any liberal democracy. All one needs to do is change the names of the constituencies and issues and it works.

While the English version will garner the bulk of the initial production, the funding has allowed for a modified and simplified Hindi version to be printed alongside. That, in turn, should help the game reach a far larger audience. In this election season, it should be a hit.