Burari Deaths: How Baba Black Sheep Prey on Those in Search of 'Moksha'

In the posh crevices of a South Delhi colony, a momentous gathering of seven to eight people is underway. A crooning chant of whispers can be heard reverberating from somewhere within the house. Inside, a group of men and women are sitting in a circle with their eyes clenched shut in a meditative pose, murmuring gentle chants to themselves.

The air is heavily laden with the scent of sage, suffused with other herbs. In the center of the gathering, sits a woman. She steadily taps a wooden drum and arches her head up in trance-like repose; a parchment of paper rests in front of her.

“The spirits above are communicating with me,” she said after the ceremony in a hoarse whisper.

Among the gathered group of people is a man perched in one corner of the room. He identifies himself as a ‘profound believer’ and has been managing his spiritual indulgences alongside his personal life for more than ten years.

Fingers decked with a multiverse of gem stone rings, he explains how his spiritual guru has been the leading light of his life and is currently helping him traverse the challenging territory of a marriage that is falling apart. “All my decisions are governed by the instructions of a higher energy that my guru communicates with,” he said. This man credits his successful and thriving business to the ‘blessings’ and guidance of his spiritual guru.

He said he’s extremely insecure at the moment. His guru’s prophecy is that his wife is disloyal to him. “I have visited a Maulvi too who has given me some seeds laced with magical incantations that will purge my wife of any spirit possession,” he said, believing that the reason his wife wants a divorce is because she’s possessed.

Unfortunately, such instances of blind religious and spiritual faith find resonance in a vast swathe of India, where people flock to mercenary religious gurus and spiritual tantriks for magical cures and solutions for ailments from cancer to epilepsy, to failing relationships and professional prospects — as mystics with their charismatic and cryptic aura encapsulate the imagination of people. 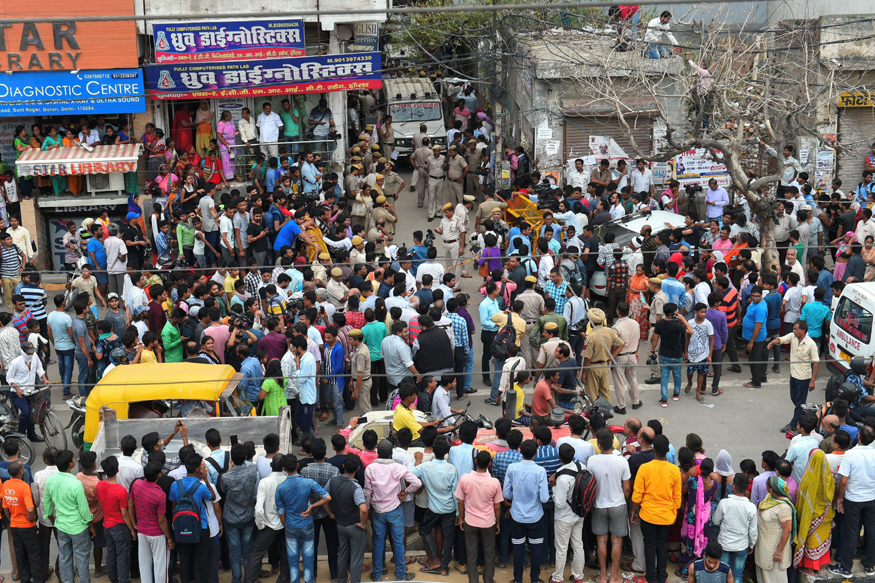 The recent Burari tragedy of New Delhi where eleven members of a family, including two minor boys, were found dead under mysterious circumstances at their home, with the police suspecting the family followed some religious practice to "attain salvation"; is a jarring reminder of the potential dangers of impetuous religious faith. Such practices and belief systems peddle on the idea of an insurmountable devotion- bridled with no restrains and limitations to any act performed under the name of faith. The comical visiting cards of multi religious ‘Babas’ claiming to fetch you jobs, obliterate your self-doubts and guarantee you a wife or husband, often flicked inside stationery autos and cars at traffic signals that we dismissively throw away; actually creep into many a lives.

On the face of it, contemporary India looks like a rapidly modernizing and globalized nation, with scientific establishments, teeming-fast trains and expansive highways. However, a closer look reveals a social situation reeking of medievalism, religious obscurantism, and an obsession with superstitions and godmen.

Dr. Rizwana Nulwala, a psychotherapist based out of Mumbai told New18.com that the number of cases where a religious habit or activity can be understood on the plane of mental disorders are endless. “Tantrik pujas, ‘jhaad-phook’ at temples and dargahs and a general obsession to please gods or godmen are the most prevalent examples,” she said. This also includes several cases of psychotic breakdowns that can be identified under the cluster of schizophrenia.

Dr. Nulwal related one such incident of a woman who started to believe that her dead husband is able to communicate with her under the tutelage of a religious guru. Over time, she got convinced that she could not only hear her husband’s voice, but also summon him and communicate with him at all times. “She started to see herself as a psychic.”

While there were attempts to put her under medication for therapy, the woman decided to abruptly stop taking any prescribed drugs, “as the voice inside her told her not to.”

Several psychologists that News18.com spoke to said that mental diseases like schizophrenia resulting in split personality are also found to be cause of individuals killing themselves and others. “There is a serious concern that while we conclude spiritual and mystical reasons for deaths, we may just be passing off the possibility of mental illnesses,” said Nalini Deka, senior psychologist in Delhi University.

Highlighting the relevance of Tantriks in people’s life, Dr. Nulwala explained that Tantriks provide anxiety relief to people under the folds of charismatic leadership. She said that the idea usually is, ‘I am going through a lot and this man is willing to pray for me so I will pay him a lot of money and take his help to make my life better’.

"So even if there’s a small movement, you tend to associate it with the man’s prayers and not rational outcomes or your own capabilities,” she added.

In yet another case, a man tested HIV positive embarked on a desperate quest for having sexual intercourse with a virgin, as his Tantrik guru instructed him to in order to cure his illness.

A lot of people, in the pursuit of finding comfort and meaning in a world they fail to understand, have known to drift to alcohol, drugs and even therapy to find answers. In India, people often seem to drift to the godmen.

In a country of a million gods and thousand identities, the changing socio-economic landscape has huge cultural and psychological implications. Often, an intense cultural and social crisis in the lives of people compels them to seek a solution in the other-worldliness advocated by these babas and gurus. As Dr. Nulwala explained, “A lot of cases of blind faith and religious obsession of some kind are attributed to a deep sense of alienation and loneliness in an individual.”

According to Dr. Malay Dave, Consultant Psychiatrist in Private Practice, the concept of religious obsession from a psychological purview is highly variable. “We do not have anything like a religious disorder. Sometimes it’s a manifestation of some psychiatric illness to begin with. This could be anxiety of some kind or depression, to name a few,” he said.

Dr. Dave further explained that such habits emerge out of an interplay of various reasons. “There are expectations that problems will be solved. Some people feel that they need to be more religious or spiritual in order to achieve self-development. For some people it’s about belonging to a certain group of their personal life or the society.”

For many families, the godman isn’t just a magic wielding miracle- maker: but are also the agony pundit, the family consultant, the psychologist and the spiritual guide. They offer answers, solutions, and happiness, an island of liberation in an otherwise hostile world. They are the anchor that roots the individual to a cause, or decision. Gradually they manifest into a devotee’s moral compass, swallowing every other belief system of their lives.

From the psychological standpoint, the situation only worsens. As Dr. Malay explained, some people become so firmly entrenched into their religious or spiritual belief systems that they completely disjoint themselves from every other part of their life: their family, society or friends.

According to him, there is an element of uncertainty in chancing upon the problem in patients with such psychotic breakdown. “It’s not a simple sentence with a full stop. Hearing voices of God or believing that they’ve been sent by God are clear signs of delusions and hallucinations, which means that they have broken away from their actual reality.”

Dr. Nulwal had similar views to offer. “‘Don’t talk to your brother because he doesn’t believe you,’ for instance a guru would say. There is a marked isolation that is meted out in a subtle way by these gurus to gain full control over the minds of people,” she said.

Interestingly, according to psychologists, if the dominant member of the family is the one who is a believer of insufferable religious values or practices, he or she is able to overpower other members of the family and persuade them to turn into believers too. As Dr. Nulwal pointed out, “This works perfectly in the case of men in the family who are overzealous about religion, owing to the patriarchal values of the society.”

What’s even more alarming is the fact that, maximum number of Indians involved in such fervent religious or spiritual activities are actually educated; reflecting upon a case of strong dissonance between education and rational thinking. Many psychologists told News18.com that the maximum number of patients are not just educated individuals, but also happen to belong to the prosperous strata of the society.

This doesn’t come as much of a surprise as one can easily trace back to countless fables and instances of politicians and Bollywood stars anticipating the auspicious ‘muhurat’, or of astrology obsessed industrialists sporting a ring for a remedy or perhaps even your neighborhood aunty’s feverish preoccupations with the house furniture in the quest of achieving ‘vastu’.

One very important reason behind this kind of religious brainwashing can be appropriated to the lack of knowledge and skills among people to understand religious scriptures or literature on their own.

A young man in Mumbai was frazzled by the thought finding a job and a bride after college. On someone’s suggestion he started reading a lot of religious scriptures for appeasement and had his first encounter with something religious and spiritual in his life. Fraught by his inability to fathom the scriptures, he decided to get associated with a religious group and became heavily involved with it.

This young man is a patient of Dr. Malay for five years now. “It started from keeping unnecessary fasts. Soon enough he was walking barefoot on roads in the fear of killing insects, started shutting all doors and windows of his house in the fear of getting polluted by the dust outside and eventually withdrew himself into absolute darkness, as he started fearing lights,” Dr. Malay said. For years now, this young man has been living in a state of absolute paranoia, with alarmingly degrading health and would lock himself in complete isolation.

Since the understanding of religious scriptures requires guidance, people seek help from various sources. Dr. Malay further explained, “There are multiple interpretations. There is no uniformity as to whether someone’s interpretation is absolutely correct, incorrect or somewhere in between.” And so, people tend to do anything in the name of faith and devotion.

The modern Indian guru phenomenon takes the most unpleasant elements of the Western cultist mentality and the Hindu tradition of total supplication before the teacher and gives it a pseudo-religious sanction under which godmen exploit the weaknesses of existing institutions like family, religion and society to their advantage.

Talking about the mysterious Burari murder case, Ravi Kant from Centre for the Study of Developing Societies said, “It is a baffling event".

"The belief that it's not really death, but actually rebirth looks like a case of how moksh and liberation are serious ideas. Underlying all of this is the idea of desperation to seek quick remedies for problems. Superstition is not history, it's a living thing," Kant said.