Comic book on periods! NID alumni aim to break myths around menstruations in an informative and fun way

This duo from National Institute of Design, Ahmedabad, ignored plum jobs to start a revolution of sorts; to make menstruation a healthy feature in the lives of young girls.

Ahmedabad: Did you know that May 28th is Menstrual Hygiene day? Well, obviously not. But did you know, that, at the forefront of India's menstruation awakening is none other than a guy, Tuhin Paul, who along with his wife Aditi Gupta, is creating ripples with their comic book on periods? Yes, this design educated duo from National Institute of Design, Ahmedabad, ignored plum jobs to start a revolution of sorts; to make menstruation a healthy feature in the lives of young girls. Their comic, Menstrupedia, is being used by 15 schools in India and has been translated in Spanish and Nepalese as well.

Soon, local organizations are going to print the books locally in Uruguay. Many top tier organizations like JSW Foundations, ITC and Madusind Solutions are getting the books distributed through their CSR initiatives.

Here, the duo debunks some interesting myths related to this unnecessarily taboo phenomenon in India.

Myth: A menstruating woman is sick, impure or even cursed

Fact: A menstruating woman isn’t impure; the blood and fluid coming out of the system is just the unused blood and tissue that was not utilized to nourish a baby in the womb. 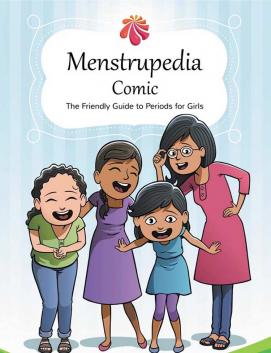 Myth: A menstruating woman cannot offer prayers or take part in religious ceremonies. She is forbidden from touching sacred objects or enter a place of worship.

Fact:To begin with, she may be bummed from all that weakness due to bleeding. Or maybe, she is not visiting a place of worship out of respect for your religious sentiments. Either way, she isn’t impure.

Myth: A menstruating woman shouldn’t enter the kitchen or cook food. Doing so will lead to food getting spoiled or the person eating it will get sick.

Fact: If that could get us out of cooking, then we would gladly believe in this myth. But fact is that as long as food is cooked hygienically, there is no reason why anyone will fall sick. 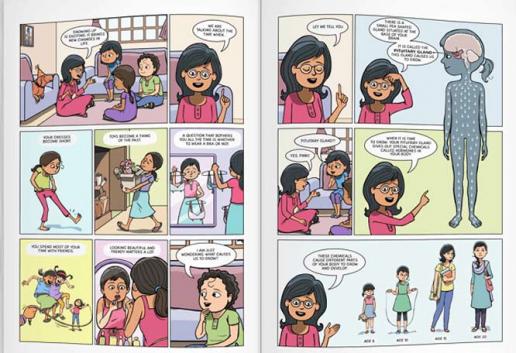 Myth: Intercourse with a woman in her periods, spreads sexually transmitted diseases and if a woman conceives during this time, the baby born is abnormal.

Myth: On getting her first period, a young girl must stay away from boys because she may get pregnant out of wedlock and disgrace her family.

Fact: It is a fact that in some Jewish households, a girl gets slapped across her face by her mother when she gets her first menstruation. The girl is slapped either to

remind her that she is now a woman and that her life will be full of pain, or as a warning against getting pregnant out of wedlock! 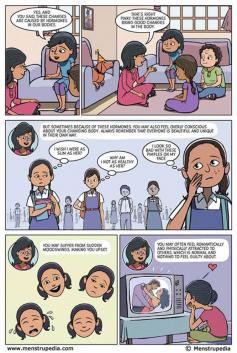 Myth: It is impossible to get pregnant during menstruation.

Fact: It is possible for a woman to get pregnant even if she is bleeding from her vagina. Some girls and women bleed slightly during ovulation. And even though this bleeding might look like menstruation, it is not. Sometimes, ovulation may occur before menstruation is over and sometimes soon after your periods are over. In both cases, giving a sperm in the vagina enough time to fertilize the egg.

Fact: Healthy menstruation doesn’t lead to anemia. Blood loss during a single menstrual cycle in healthy women is not more than 80ml (around 3 tbsp). However, more bleeding than that should be followed by a visit to the doctor.

Myth: Women in their periods have a higher risk of being attacked by a shark or a bear.

Fact: Menstruation doesn’t increase the risk of being attacked by a shark or bear. BEING NEAR them increases that risk!

Myth: A menstruating woman is sacred and powerful with psychic abilities.

Fact: This myth was mostly followed by the ancient matriarchal societies. Menstruating women are just your regular women undergoing a natural biological process. Myth: Dental filling will fall off if done while the patient is menstruating.

Fact: This false and ridiculous statement may have been given off as a reason by an incompetent dentist to a distraught patient.

Read or buy the book here.