The confusion began when a journalist shared this man's picture and wrote 'Via Getty' in the caption. He was basically giving the photograph credit to the photo agency.

Disturbing images are coming out of US Capitol building which was stormed, ransacked and vandalised by Trump supporters on Wednesday. Security officers in dark suits drew their pistols and trained them on the shouting mob trying to smash their way through the door of the normally sedate House of Representatives chamber. It was one of many shocking moments that played out on television screens across the world as the seat of the world’s greatest democracy came under assault from hundreds of protesters angered by Trump’s loss to his Democratic opponent Joe Biden in the November presidential election.

ALSO READ: Simpsons May Have Predicted US Capitol Hill Violence, and There May Be ‘More’ to Come

One of the shocking images is of a man walking away with the podium and waving cheerfully at the camera. He is seen wearing a cap with “Trump" written on it-a devoted supporter indeed. While his action has angered people, his name has been caught all the wrong-Via Getty.

ALSO READ: A Man in a Deer Suit Posed For Photos as Violence Unfolded at US Capitol. We Know Who He is

The confusion began when a journalist shared this man’s picture and wrote ‘Via Getty’ in the caption. He was basically giving the photograph credit to the photo agency Getty. “Via Getty, one the rioters steals a podium from the Capitol," the journalist wrote.

Via Getty, one the rioters steals a podium from the Capitol pic.twitter.com/V4spojl40q— Ryan Lizza (@RyanLizza) January 6, 2021

In no time the tweet picked up and people who were already angry over the turn of events, without giving it a thought, thought that Via Getty was his name. 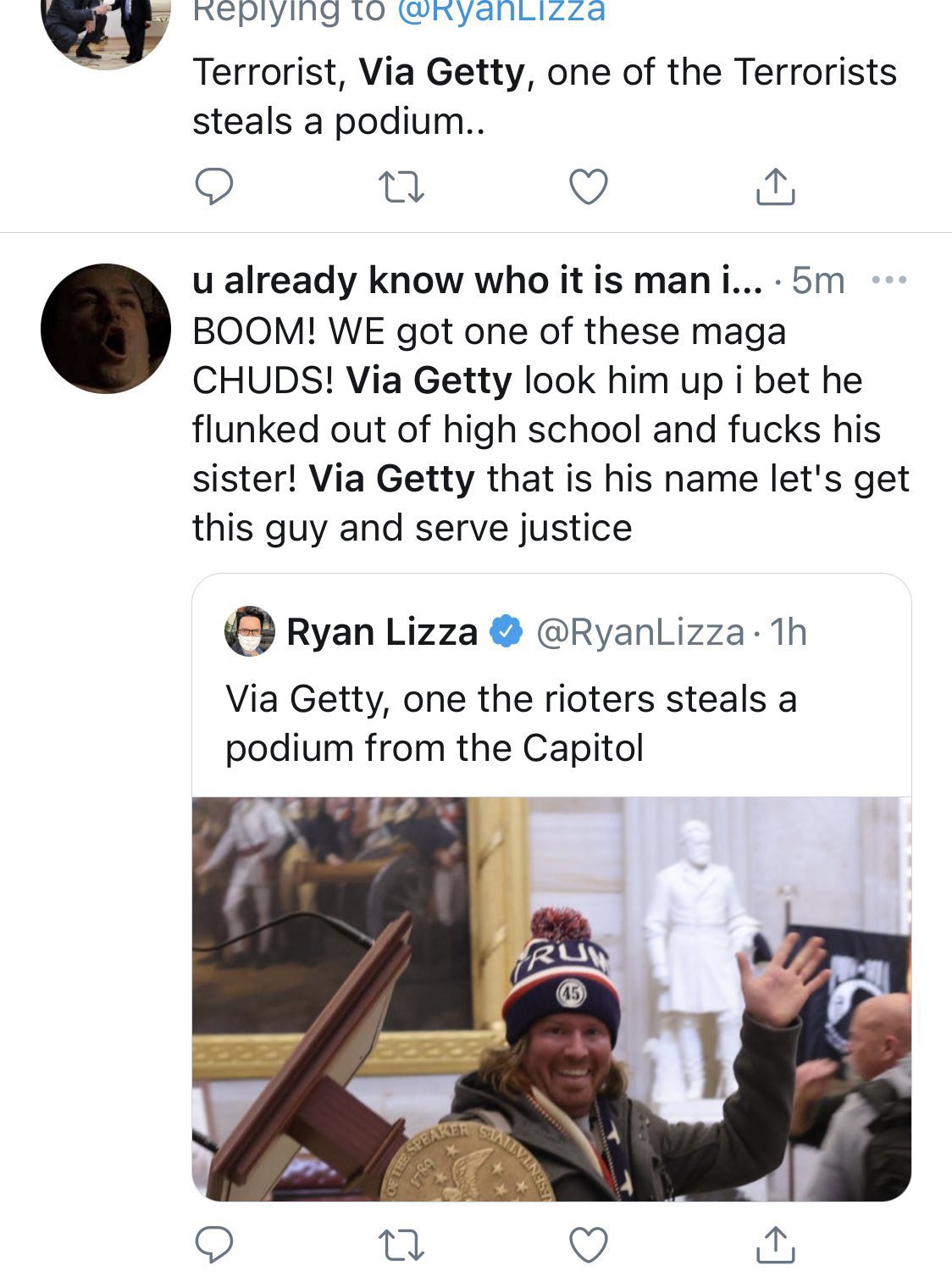 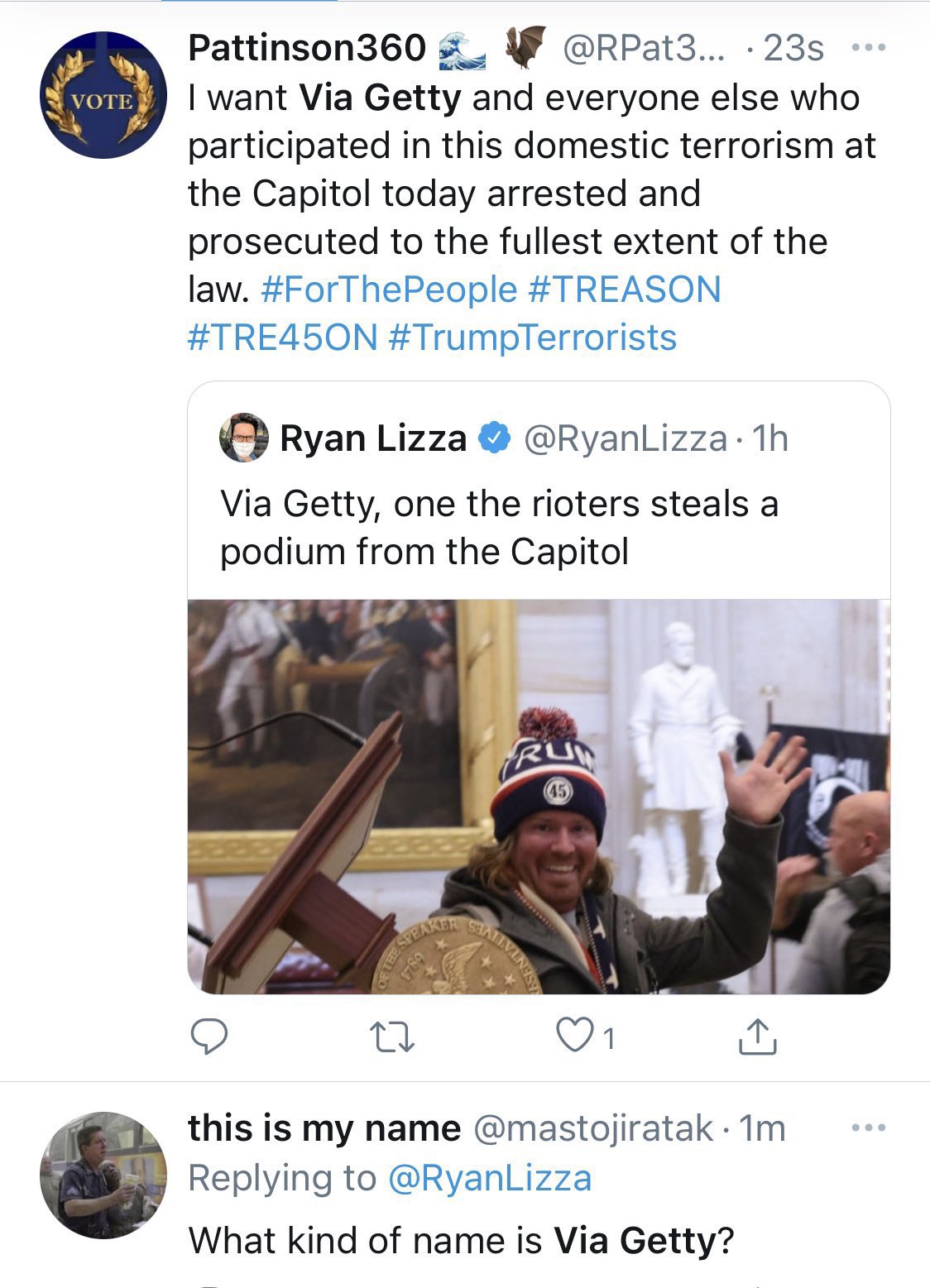 The ‘Via Getty’ part of the caption was taken so seriously, and so wrong, that the journalist who tweeted the caption had to send out another tweet to clarify that Getty is a photo agency and not this person.

To be clear, “via Getty” is not a person. It just means that this photo comes via Getty Images. https://t.co/SZY4yQ0AlI— Ryan Lizza (@RyanLizza) January 7, 2021

I can not believe you had to clarify that— SarahRogers.psd (@sarahnrogers) January 7, 2021

This whole day has been awful, but this made me laugh. And I hope they arrest him.— Karen Czarowitz (@kczar61) January 7, 2021

We need to immediately arrest Via Getty and his accomplices Via Reuters and Via Ap https://t.co/yFPWSKZz2P— Brian Floyd (@BrianMFloyd) January 7, 2021

Scary and ugly scenes unfolded at the capitol building on Wednesday. What began as a raucous protest against Trump’s defeat boiled over into a siege of the Capitol, a symbol of US democracy, that paralyzed Congress as it went through the final steps of ratifying the victory of President-elect Joe Biden.

In Photos: Trump Supporters Break Windows, But Stay Inside Rope Dividers at US Capitol Hill

Rioters brawled with police officers, pushed their way past metal security barricades, broke windows and forced their way inside the building, forcing lawmakers in both the House and the Senate to suspend their work and instead go into hiding in offices and other secured rooms.

A gray-bearded protester used what looked like a plexiglass riot shield to break a glass window of the Capitol, clearing the way for rioters to climb through.

One man posed for a photo in the office of House Speaker Nancy Pelosi, the top Democrat in Congress, one booted foot propped on the corner of her desk. Another grinned at a news photographer as he carted a lectern down a hallway. Dozens of lawmakers hunkered in a secure room for hours while officers worked to clear the building. Lawmakers from both parties, riven hours earlier by the election outcome, prayed together for American democracy.

When Congress returned on Wednesday night to resume counting the votes, clusters of armed agents, some wearing tactical gear and carrying automatic weapons, were stationed around the Capitol.

(with inputs from Reuters)