Pattie Rumfola lost her bag as a student in Ohio | Image credit: Facebook

The family of the former teen who died in 2013 revealed that the red wallet contained photographs from the 50s, 26 cents, and a pink lipstick among other items.

After over half a century, the contents of a purse, lost by a young girl in 1957 only to be found crammed in the walls of an Ohio middle school last year, reveal the fascinating life of an american teenager from the 50s.

The purse, which was found crammed in the middle of wall and a locker in North Canton Middle School, belonged to a former student called Patti Rumfola who lost it in 1957. Rumfola died in 2013, still a resident of North Canton. But as fate would have it, in May 2019, her long-lost purse was found by Chas Pyle, the "custodian" of the school, while he was reattaching some trimmings that had come loose from the lockers.

Though Rumfola had passed years before the discovery, the school contacted Rumfola's surviving family including her children. The family recently got together to open the bag and survey the contents inside and the myriad things found inside the purse reveal interesting facets of the lives of American teens from the bygone decade.

The purse contained a hairbrush, powder and a "pastel-pink lipstick as was in vogue with girls from the era. It also contained black-and white family photos including a photo of a dog dated 1950 and Rumfola's membership cards to the YMCA< library and other institutions. She had also kept a football schedule in her purse from 1956 with some of the matches marked. The purse also contained 26 cents.

The discovery turned out to be an emotional one for Rumfola's five children, all of whom kept a piece of the wheat pennies to remember their mother. Images of the items found in the purse were posted on NCMS school's Facebook page.

Some of the items appear to have been of daily use while some had been saved by Rumfola, possibly because they held special meaning to her. The wallet also contained several ticket stubs and an unwrapped chewing gum, a compact labelled 'Evening in Paris', a blue pendant on a chain, a torn page from an Archie comic along with a copied caricature indicating Rumfola enjoyed to sketch. 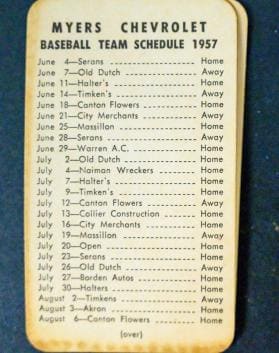 (A piece of unopened gum) (A page from a comic book) (A blue pendant and a Christian badge) 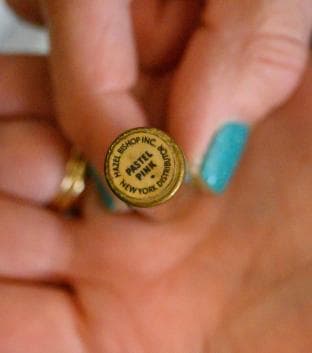 (A lipstick in the 'Pink Pastel' shade)

Rumfola went on to become a teacher.