'At IIT Delhi, we were facing issues getting Hand sanitizers in large quantities. Even when they were available, vendors were charging exorbitant amounts and quality was suspect,' IIT Delhi director wrote in a Facebook post.

With the number of deaths due to coronavirus swiftly touching 11,419 in just a span of months, the virus seems to have triggered panic buying across the globe.

This comes after several preventive measures to safeguard oneself from COVID-19 virus were suggested by international health bodies, including the World Health Organization (WHO). One of the major precautions, they said, was washing your hands or using hand sanitisers with at least 60% alcohol in them.

Since then, the demand for hand disinfectants across the world has skyrocketed, some resorting to petty hoarding while others used the global crises an opportunity to sell it at exorbitant prices.

so much for getting hand sanitizer at my neighborhood cvs pic.twitter.com/rmICppzEnZ — George Conway (@gtconway3d) March 2, 2020

So what does Indian Institutes of Technology Delhi (IIT)do in times such as these? They make their own hand sanitizer.

In a Facebook post titled "A true story", the director of the IIT Delhi, V. Ramgopal Rao, informed how the institute was facing a shortage of hand disinfectants in the campus and what they did thereon.

"At IIT Delhi, we were facing issues getting Hand sanitizers in large quantities. Even when they were available, vendors were charging exorbitant amounts and quality was suspect," Rao wrote in his now-viral post.

An annoyed Rao reached out to his chemistry professors to prepare the hand sanitisers in the campus itself. This was when the chemistry professor asked the director to take the help of the lab staff. "He replied, for such a small thing, you don't need an IIT Professor, it can be done by our technical staff. Lo and behold, in flat two days, we have 50 litres of hand sanitizers meeting WHO standard (certified by IIT Profs). All at a negligible price," Rao added.

Calling it the "spirit" to combat coronavirus, an ecstatic Rao added: "Head, Chemistry sent an email to all other departments saying anyone who needs them, can come and collect." 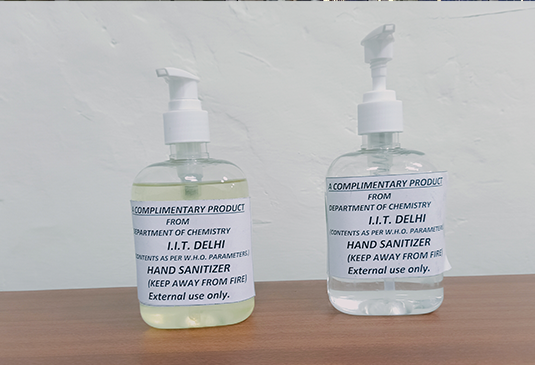 The same was updated on IIT Delhi's official website.

"The Department of Chemistry, Indian Institute of Technology Delhi has prepared alcohol-based hand sanitizer, which has been prescribed by WHO for destroying coronavirus and its spores from surfaces and hand for use by the campus community," the website stated. The formulation produced by the department contains three chemicals along with Aloe Vera and the major component is isopropyl alcohol (around 75%).

“Alcohol rub sanitizers containing at least 70% alcohol are known to kill microorganisms on hands within 30 seconds to one minute after application,” Prof Anil J Elias, Head, Dept. of Chemistry, was quoted as saying by the website.