Abhishek Bachchan schooled an Internet troll who was 'worried' about Aaradhya Bachchan not attending her school.

Junior Bachchan has had a long history of confronting Internet trolls. While ignorance is bliss, Bachchan never shies away from calling sh*t out on microblogging site Twitter.

A couple of years ago, a random troll faced the wrath of Abhishek on Twitter when he tweeted out a meme intending to make fun of his choice in movies, but made a mistake of including a photo of his daughter Aaradhya in the tweet.

The meme poked fun at how his daughter Aaradhya would not like watching Drona and Jhoom Barabar Jhoom and also wondered why Aishwarya Rai married him. 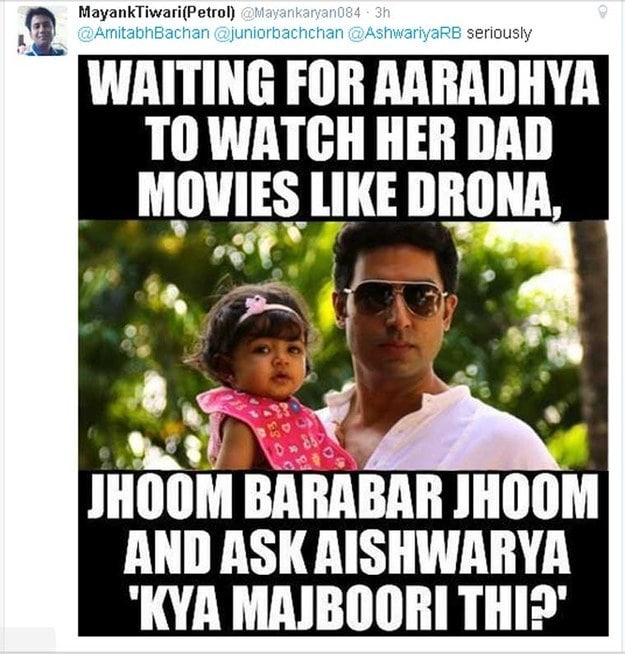 @Mayankaryan084 you feeling better about yourself now??? Good! Glad to have been of service. Now go back to the hole you crawled out of.

@Mayankaryan084 don’t like my movies? That’s cool. Will work harder to make movies you like. Bringing my daughter into it is NOT cool.

Fast forward to 2017, nothing has changed. Neither the trolling nor JuniorB's way of dealing with it.

On Monday, a Twitter user with the handle "@shirjahan" apparently made a reference to Aaradhya's recent appearance with mommy Aishwarya Rai Bachchan at a wedding in Mangalore.

The tweet which has now been deleted (also, the account is also private now) read, "@juniorbachchan, is ur child not going to school? I do wonder What school gives permission to take a out a kid when u like to go a a trip with mom. Or are u guys going for beauty without brains. Always hand in hand with a arrogant mom. Not having a normal childhood."

Abhishek took notice of the tweet and without losing his cool said that Aaradhya goes to school on weekdays like other children.

"Ma'am, as far as I know… Most schools are shut for the week-end. She goes to school on the weekdays. Maybe you should try it considering you spelling in your tweet."

Ma’am, as far as I know… Most schools are shut for the week-end. She goes to school on the weekdays. Maybe you should try it considering you spelling in your tweet.

The lady responded (now deleted) to Abhishek's tweet with an "advise" saying, "A yeah the spelling😂Any thanks for the response . Most people think it but don’t have the guts say something. Maybe u guys should post some pictures of her as normal kid and not one always hanging on her moms arm"

Great reply!!! Kids should be kept out of this nonsense

Hey normal children will always hang on their mothers arm right? What's wrong in that? Plus not every child sit&study whole day, obvio. I'm really about #aishwarya rai baxhchan and @juniorbachchan coz they take their child wherever they go without leaving her at home with a nanny

Ugh, I'm sorry you have to deal with this garbage Abhishek. Your family is beautiful ❤

"To them, all that have wished with greetings for Aaradhya .. my gratitude and thanks .. .. your wishes and blessings shall always be cherished with love ..," he wrote alongside a collage of Aaradhya's photos.

T 2712 - To them all that have wished with greetings for Aaradhya .. my gratitude and thanks ..🙏🙏 .. your wishes and blessings shall always be cherished with love ..😀 pic.twitter.com/Ga4eDfPSY2