Going with the 'spirit of the game,' Krunal Pandya once again stopped in his tracks, to issue the batsman 'Mankad' warning for backing up. The batsman at the non-striker's end? Mahendra Singh Dhoni.

Anurag Verma
You simply don't mess with Dhoni. Despite having played international cricket for over 15 years, Mahendra Singh Dhoni is as alert on the field today as he was when he began his career. Wednesday's 'Mankad' warning is a prime example.

Earlier, Mumbai Indians all-rounder Krunal Pandya earned a lot of praise for sparing Kings XI Punjab's Mayank Agarwal from 'Mankading' him when he had an opportunity to, slyly reminding the Punjab captain Ravichandran Ashwin how 'Mankading' is done. The spinner had dismissed Rajasthan Royals' Jos Buttler without giving him a prior warning, causing a huge uproar within the cricket fraternity.

Going with the "spirit of the game," Pandya once again stopped in his tracks, to issue the batsman a warning for backing up. The batsman at the non-striker's end? Mahendra Singh Dhoni.

The incident happened in the 14th over of the second innings during the Mumbai Indians and Chennai Super Kings clash, when CSK was chasing MI's 170/5 at the Wankhede Stadium.

Bowling to Kedar Jadhav, Pandya completed his run-up but never released the ball to inform Dhoni to stay in the crease.

But was Dhoni backing up?

The replays that ran on the big screen told a different story. Dhoni was in his crease all the time and at no point had he dragged his willow away from the safety. 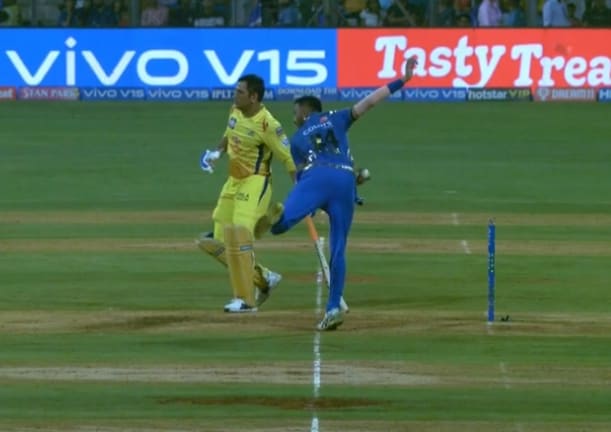 Dhoni's alertness on the field had Sanjay Manjrekar seated in the commentary box tittering.

"Right instincts for Dhoni. The bat was inside, the ball was in the scene. He does most things right. Just out of instincts, with Dhoni very rarely will you see him do something that is incorrect," Manjraker said.

Mahi fans were left unamused after the incident.

A Mankad "attempt" from Krunal to Dhoni?! Man, imagine that. Dhoni was well back in his crease though. He is too smart for that.

If #krunal dared to mankad #dhoni he may have faced the wrath of a nation. #MIvCSK

Imagine if Krunal got Dhoni with a mankad there, scenes. #MIvCSK #VivoIPL #IPL12

Ok there goes that 'if it was Dhoni' for Mankad argument..

What's with reports of Krunal trying to mankad Dhoni??? He just stopped in his tracks to see what the batsman was trying. Did it a couple of times last year too. Now are we calling every such delivery a mankad attempt?? #MIvCSK #IPL2019

Later, the video was uploaded on the official IPL website. You can watch it here: iplt20.com.

Back to the match, Chennai Super Kings faced their first defeat in the ongoing IPL season after they succumbed to a 37-run loss to Mumbai Indians on Wednesday at the Wankhede. MI's Suryakumar Yadav smashed a valuable 59 (43) and late fireworks by Hardik Pandya (25 off 8) and Kieron Pollard's 17 in 7 deliveries propelled the home team to a competitive score of 170.

CSK's chase was marred by excellent spells from Lasith Malinga and Hardik Pandya, who bagged three wickets each while Jason Behrendorff
managed to send two CSK batsmen to the dugout.

The Men in Yellow could only manage 133/8 in their designated 20 overs.
Tags