Donald Trump Tweets How Two Years of his Term were 'Stollen,' Which Is a German Bread

Stolen, according to the Cambridge dictionary is the past participle of 'steal.' Stollen, which Trump used, means, 'a rich German fruit and nut loaf.'

President of the United States, Donald Trump has a history of making typos in his tweets.

While some of them have been about daily objects like 'covfefe,' and 'forrest,' and some have been about US policies, like increasing security at the 'boarder.' Adding to this long list of gaffes, Trump in a tweet recently wrote about how two years of his term were 'stollen,' from him.

Stolen, according to the Cambridge dictionary is the past participle of 'steal.'

Trump, essentially said two years of his term were a fruit-laden German bread.

“Despite the tremendous success that I have had as President, including perhaps the greatest ECONOMY and most successful first two years of any President in history, they have stollen two years of my (our) Presidency (Collusion Delusion) that we will never be able to get back,” the tweet read.

In another, he added: “The Witch Hunt is over but we will never forget. MAKE AMERICA GREAT AGAIN!” 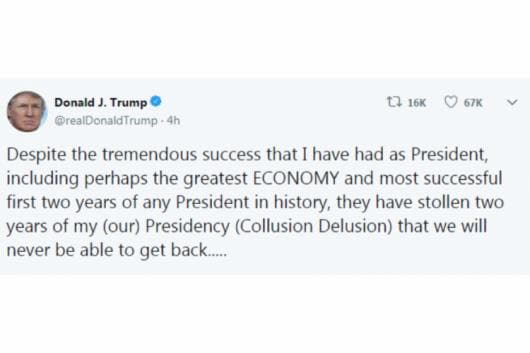 Trump has since deleted the tweet, but Twitter had already caught onto the fruity, nut-laden German bread.

Ok, stolen as in taken away or stollen as in German bread? https://t.co/jV14TON8A3

Just to clarify: in Germany this is a Stollen. pic.twitter.com/p9yV01UcrE

Stollen is a German fruit bread.

“Stollen” is actually a thing: a German bread served at Christmas. https://t.co/hqxXZOxgob

Stollen is a fruit bread of nuts, spices, and dried or candied fruit, coated with powdered sugar or icing sugar. It is a traditional German bread eaten during the Christmas season, when it is called Weihnachtsstollen or Christstollen pic.twitter.com/g9LTahWl4W

I have stollen every Christmas! pic.twitter.com/IfM6LTwsH5

It's a little early for stollen. Traditionally it is made during Christmas time in Germany. And though it is delicious I don't think the Dems have made your Administration into a German Christmas Bread. #arewegreatagain

"Stollen" is actually a Flemish bread, similar in texture to challah. https://t.co/3OJAZo4MSj

Get the stollen cakes in! Make Christmas come early

Perhaps he's missing a loaf of bread. I've got a good recipe if he needs it. pic.twitter.com/YpMNYVhveI

Trump's reply about german bread came as complaining about how two years of his first White House term were “stollen” as a result of special counsel Robert Mueller’s investigation.

This isn't the only typo Trump has made in recent times, and if you want something to snack on while going through them. 'stollen and covfefe', might be a good pairing..