In June 2018, a group of 30 women employees in Ernst and Young's Hoboken office in New Jersey, US, were given a workshop on how to succeed in the firm.

About 30 women employees in Ernst & Young were allegedly given leadership training seminar in which they were given dressing and behavioural advice and asked to not show skin and distract male colleagues.

The incident allegedly took place in June 2018 in EY's Hoboken office in New Jersey, US, right after the Me Too movement started gathering steam. While EY implemented several policy changes and fired a male employee accused of sexually harassing a woman colleague, the appalling advice doled out to women in this conference is not just regressive but also reeks of misogyny.

The training was called Power-Presence-Purpose or PPP and consisted of a copy of a 55-page presentation on how women should dress, how they should communicate, how they should respond to male colleagues.

Sample some of the "suggestions", as reported by Huffington Post, given to women so that they could succeed at EY:

"Don't flaunt your body: sexuality scrambles the mind", was one of the cryptic and incredibly sexist suggestions women reportedly received. The program also instructed girls to "speak briefly as women often ramble and miss the point", maintain a "good haircut" and only wear clothes that complemented their bodies.

As part of the workshop, women were also told to not confront men in meetings in order to not threaten him but to rather talk to him in private. Or sit across them without crossed legs. In fact, the rules asked women to NOT talk face-to-face to men at all as it allegedly threatens them.

Not just sagely advice but the course also offered questionable information about women's brain-size,, claiming they were six to eleven percent smaller than male brains. The women were also told that "women’s brains absorb information like pancakes soak up syrup so it’s hard for them to focus" Male brains, however, were more like waffles that were "better able to focus because the information collects in each little waffle square".

The women were also allegedly asked to fill out a questionnaire of alleged masculine and feminine traits. Masculine characteristics included "acting like a leader", being "aggressive", "being self-reliant", and other adjectives like "competitive", "athletic", "dominant" etc.

Feminine characteristics, on the other hand, included words like "cheerful", "child-like", "affectionate", "shy", and "eager to soothe hurt feelings". Interestingly, "femininity" was also a trait listed under the feminine section.

The women were meant to score themselves on each of the traits to find out how feminine or masculine they were.

Before they got to the seminar, women had to rank themselves on this masculine/feminine scoresheet. Feminine traits include "gullible" "childlike" "shy" Masculine include "ambitious" and "acts like a leader" https://t.co/FlFvdpzzxx pic.twitter.com/f9zQfrPoiv— Emily Peck (@EmilyRPeck) October 21, 2019

While EY has responded saying the contents of the workshop have been misrepresented by media, they also told HuffPost that the leadership course in question was one of many such courses offered to men and women at EY. The company confirmed, however, that the PPP course was under review and no longer available and that the June workshop was the last time it had been taught.

The news drew massive outrage on social media. Many referred to the presentation as "rage inducing", "sick" and yet not surprising. 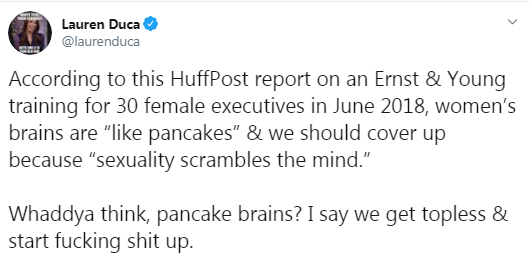 I cannot even finish reading this article because it is so rage-inducing.https://t.co/qEEAcJv061— Mieke Eoyang (@MiekeEoyang) October 21, 2019

Only 20.4% of EY’s principals and partners are women while only 12% are employed as client service partners with the firm.