US President Donald Trump directed his administration to reform the H-1B visa system and move in the direction of merit-based immigration. This new rule has left many Indians worried.

On Monday, US President Donald Trump directed his administration to reform the H-1B visa system and move in the direction of merit-based immigration, White House officials have said. The President is suspending H-1B, L-1 and other temporary visas in a move to "protect" the local workers facing unemployment amid pandemic.

"Moving to a merit-based immigration system," the White House said in a statement after Trump announced the temporary suspension of H1-B and other visas till the end of 2020. The statement went on to say that the Trump administration would reform the system to prioritise skilled workers and protect American jobs.

The White House statement said that these changes would help protect the salaries of American workers and ensure that foreign labour coming into the US is high-skilled and do not undercut the United States labour market.

"The more permanent actions that he is directing us to take include reforming the H-1B system to move in the direction of a more merit-based system. You hear the president talk all the time about getting the best and the brightest, and you also hear him talking about protecting American jobs. So, these reforms will do both," a senior administration official told reporters during a conference call, according to news agency PTI. 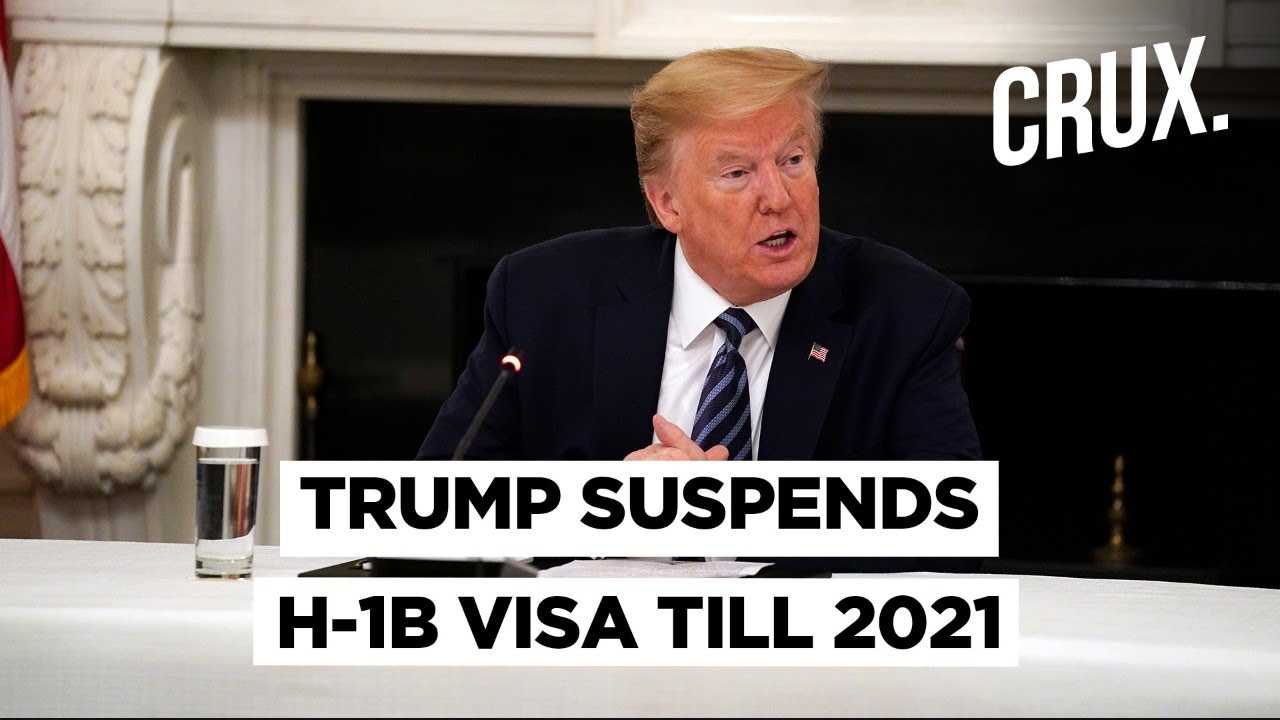 This is the right time for Indian It professionals to realise there is a home back here that you need to build & show trump by becoming a tech giant nation
Suspension of #H1B has led to realisation that no matter how go you are,that's not your home,they can throw u away anytime

The people of Indian origin that voted Trump in 2016 have been cheated by suspension of H1B visas till year end. It'll be tough to say if he survives by this year end. H1-B#TrumpRallyFail https://t.co/CaEO73dtRS — Farhan Shah (@farhanindian) June 23, 2020

🔴🔴 Indian IT Companies Geography SPLIT...Companies with more dependence on America will be most impacted by #h1bvisa Suspension pic.twitter.com/CTrF1Njjq2

Banning all H1B visas means CEOs like me have to open offices and hire more people in countries like Canada that allow immigration. This visa ban is morally wrong, and economically stupid. What happened to being “for legal immigration”? https://t.co/R9O9Q1Ts0j — H1B immigrant Anshu Sharma 🌶 (@anshublog) June 22, 2020

H1-B is how mostly every single indian family imigrate over on, these people have masters degrees and come to work in either tech or healthcare, the administration thinking this will help poor americans more than welfare programs is ridiculous https://t.co/lUNyNhdM41

Unfortunately, the system is formulated to discriminate against the Indian talent on H1-B visas and creates a backlog of 150 years for green cards. All in the name of legal STEM immigration curbing labor mobility and innovation. https://t.co/jkf2swAUrp — Amish Doshi (@desi_c0wb0y) June 23, 2020

My friend Srinivas and I came both to the US more than 10 years ago with a job and a dream coming true. For many years we worked desk to desk and contributed to this country.
I am now a US citizen, he is STILL on an H1-B.

Please lift your hold on the #S386 bill @SenatorDurbin


Not just Indians, the H-1B debate rocked persons of different nationalities that may come under scanner after Trump's decision.

The suspension of the H1B visa program is bad for the US, bad for innovation, and will shatter dreams and disrupt lives. As a former H1B visa holder, my heart goes out to all the families affected.

While you’re Tweeting about #WWDC2020 and getting excited about the new releases. Please take a moment to think about how much of it has been brought to you by people who came to US on H1-b work visas. — Yuan Wang (@yuuuanw) June 22, 2020

myself and many colleagues across all disciplines exist and have been productive because of H1B and J1 VISAs, and we work very hard to help avoiding things like the curve on the right...

is it the time to move our talents (and our taxes) elsewhere? pic.twitter.com/axvEojtZu2

I'm sad and frustrated to read about the temporary ban of the H1b program. I came here on an H1b and almost every immigrant friend I know did so too. We didn't steal jobs from Americans. The job market is simply not a zero sum game. — Gustaf Alströmer (@gustaf) June 23, 2020


Prominent Twitter users also voiced their concern against the ban.

"Those who believe legal immigration, particularly work visas, are harmful to the American worker do not understand the American economy," US Senate candidate Lindsey Graham wrote.

Those who believe legal immigration, particularly work visas, are harmful to the American worker do not understand the American economy.

This is not the right approach. We need to mend the H-1B program, not end it. Instead of suspending H-1B visas, the Trump Admin should ask Congress to pass the H-1B and L-1 Visa Reform Act of 2020, which reforms the H-1B program with a scalpel, not a sledgehammer. https://t.co/fYp1FOM879 — Senator Dick Durbin (@SenatorDurbin) June 23, 2020


In fact, SpaceX and Tesla chief Elon Musk, who has more or less been on the same page as Trump through the lockdown restrictions laid down in the US during pandemic, disagreed with the ban.

Very much disagree with this action. In my experience, these skillsets are net job creators. Visa reform makes sense, but this is too broad.

Disappointed by move, Google chief Sundar Pichai said he and his company would "continue to stand with immigrants". "Immigration has contributed immensely to America’s economic success, making it a global leader in tech, and also Google the company it is today. Disappointed by today’s proclamation - we’ll continue to stand with immigrants and work to expand opportunity for all."

Immigration has contributed immensely to America’s economic success, making it a global leader in tech, and also Google the company it is today. Disappointed by today’s proclamation - we’ll continue to stand with immigrants and work to expand opportunity for all. — Sundar Pichai (@sundarpichai) June 22, 2020