Fact Check: Did Deepika Padukone Wear a T-Shirt with Slogan in Support of Farmers?

The posts were shared shortly after the parliament passed several contentious farm bills.

A photo has been shared tens of thousands of times in multiple Facebook and Twitter posts alongside a claim it shows Bollywood actress Deepika Padukone wearing a T-shirt emblazoned with a slogan in support of farmers. The posts were shared shortly after the parliament passed several contentious farm bills. The claim is false; the image has been digitally manipulated to include a doctored slogan on the actress' T-shirt. The post’s Hindi-language caption translates to English as: “Look carefully what is written on her t-shirt. I stand with Indian farmers. Deepika showing her position to the lapdog media.”

On September 20, 2020, the parliament passed several contentious farm bills despite fierce opposition. Critics say that once the bills become law, they will result in the end of assured minimum prices on goods, which will in turn marginalise small-scale, independent farmers while benefiting private conglomerates. Farmers across the country have taken to the streets in protest, AFP reported on September 25, 2020.

The claim, however, is false; the image has been doctored to include the slogan on the T-shirt.

A combined reverse image and keyword search on Google found the original photo published here by English-language newspaper, The Indian Express, on March 20, 2018. The photo is credited to The Indian Express photographer Varinder Chawla.

Below is a screenshot comparison of the misleading post (L) and The Indian Express photo (R): 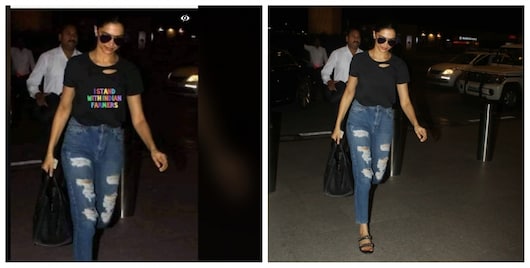 The photo caption reads: "Deepika Padukone was also seen coming out of the airport."