Home » News » Buzz » Florida Boat Gets Stuck in Middle of Highway. Suez Canal Ghost, is That You?
2-MIN READ

Florida Boat Gets Stuck in Middle of Highway. Suez Canal Ghost, is That You?

The picture of the boat was shared on Facebook.

Crestview Fire Department shared pictures that showed a boat briefly blocking traffic after it fell on a Florida interstate.

The Suez Canal has been in news after a ship got stuck there leading to a massive blockage impacting global trade. While the efforts are on to move the sand and free the boat, another ship has joined made it to news in Florida.
However, the boat did not block any waterways. It obstructed an entire highway. Internet was quick to find similarities between the two events across the globe and joke if there was a mutiny planned by the boats. Crestview Fire Department shared pictures that showed a boat briefly blocking traffic after it fell on a Florida interstate. While it wasn’t as huge as the container ship stuck in Suez canal, this pink boat too blocked the road in a similar pattern. 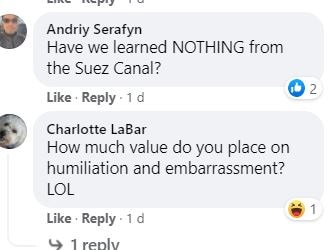 The situation hasn’t been as bad in Florida, as it has been in Suez Canal where the ship is now stuck for more than five days and very less progress has been made to move the ship. The Suez Canal Authority (SCA) said on Sunday that tugging and dredging operations to free a grounded container ship blocking the waterway would continue around the clock, according to wind conditions and tides. Dredgers working to dislodge the stranded ship have so far shifted 27,000 cubic metres of sand around the ship to reach a depth of 18 metres, the authority said in a statement.

The 400-metre (430-yard) long Ever Given became jammed diagonally across a southern section of the canal more than five days ago, halting shipping traffic on one of the world’s busiest waterways. As of Saturday, 321 boats were waiting to transit the canal, including dozens of container ships, bulk carriers and liquefied natural gas (LNG) or liquefied petroleum gas (LPG) vessels.

The 200,000-tonne vessel, named ‘Ever Given’ and operated by Taiwanese company Evergreen Marine ended up lodging sideways sometime in Tuesday after being hit by strong winds. The incident has ended up blocking several ships on either side on one of the most important sea routes. The Suez Canal connects the Mediterranean to the Red Sea and is also the shortest sea route between Asia and Europe. Digging boats have been set to work to help the stuck vessel back on its route.

As attempts continue to clear the blockade, a bulldozer has been brought in to help clear the silt and sand accumulating near the Ever Given. The teeny tiny size of the vehicle, as compared to the gigantic ship, has triggered hilarious memes online.