News18» News»Buzz»'Forrest Trump': The US President's Latest Typo Has Inspired a lot of Memes on Twitter
2-MIN READ

'Forrest Trump': The US President's Latest Typo Has Inspired a lot of Memes on Twitter

Donald Trump isn't new to typos, but he certainly seems to be outdoing his personal best.

Trump wants to build a wall and increase 'Boarder Security' in the United States.

If your daily dose of entertainment while you sip 'covfefe' are politicians making typos, Donald Trump has you covered.

In a recent tweet, where he threatened to cut the funding off for the California Forest fires, which were the deadliest and most destructive fires in all of 2018, Donald trump misspelled 'Forest.' Twice. And while we all make typos on social media, Trump sometimes goes above and beyond with his typos.

A user also commented why he thought the phone 'autocorrected' to 'Forrest.'

Donald Trump has since fixed his typo.

Billions of dollars are sent to the State of California for Forest fires that, with proper Forest Management, would never happen. Unless they get their act together, which is unlikely, I have ordered FEMA to send no more money. It is a disgraceful situation in lives & money!— Donald J. Trump (@realDonaldTrump) January 9, 2019

But the Internet had already caught on.

This isn't also Donald Trump's first typo. Or one in recent times, as well.

There's always a "smocking gun" when it comes to Trump.

“Democrats can’t find a Smocking Gun tying the Trump campaign to Russia after James Comey’s testimony. No Smocking Gun...No Collusion.” @FoxNews That’s because there was NO COLLUSION. So now the Dems go to a simple private transaction, wrongly call it a campaign contribution,...— Donald J. Trump (@realDonaldTrump) December 10, 2018

The Internet does not let him "offs scot-free" for these typos, though.

....his wife and father-in-law (who has the money?) off Scott Free. He lied for this outcome and should, in my opinion, serve a full and complete sentence.— Donald J. Trump (@realDonaldTrump) December 3, 2018

Even when he wants to talk about the counsel.

It’s ‘counsel’, Biff. The word is ‘counsel’.I was trying to comprehend how in the world a man, even as moronic as you, can misspell a word he probably reads fifty times a day. But then it dawned on me, you probably only HEAR the word.You don’t read shit.And we all know it. https://t.co/7zZGZRZtkF— Chris Evans (@ChrisEvans) August 20, 2018

And our personal favorite - cofveve, which became the Internet's buzzword. 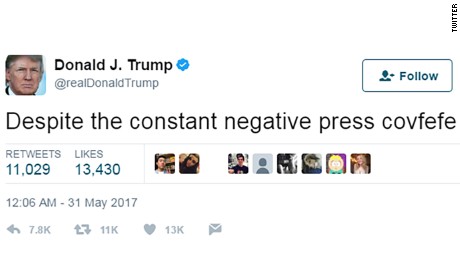 But we're sure he's "honered" to be here, serving us.