Protesters around the world are now turning towards statues and monuments of famed world leaders, like former British PM Winston Churchill or Columbus.

This week, statues of Italian explorer Christopher Columbus were damaged in Virginia, Minnesota and Boston in the United States amid George Floyd protests as protesters continued to direct their anger and frustration with systemic racism towards monuments and statues.

George Floyd, a 46-year-old black man, died after being arrested by the police outside a shop in Minneapolis in the US on May 25. Footage showed a white officer, Derek Chauvin, kneeling on Floyd's neck for several minutes while he was pinned to the floor. He was pronounced dead later in the hospital, triggering widespread protests across the US.

His death triggered widespread furore as people across nations went up in arms against police brutality and racism. In fact, all fifty states of the USA took to the streets, even amid the coronavirus pandemic, to fight for basic civil rights which the African American communities have been denied for generations. The #BlackLivesMovement, however, has now culminated into something bigger - something that was a long time coming. 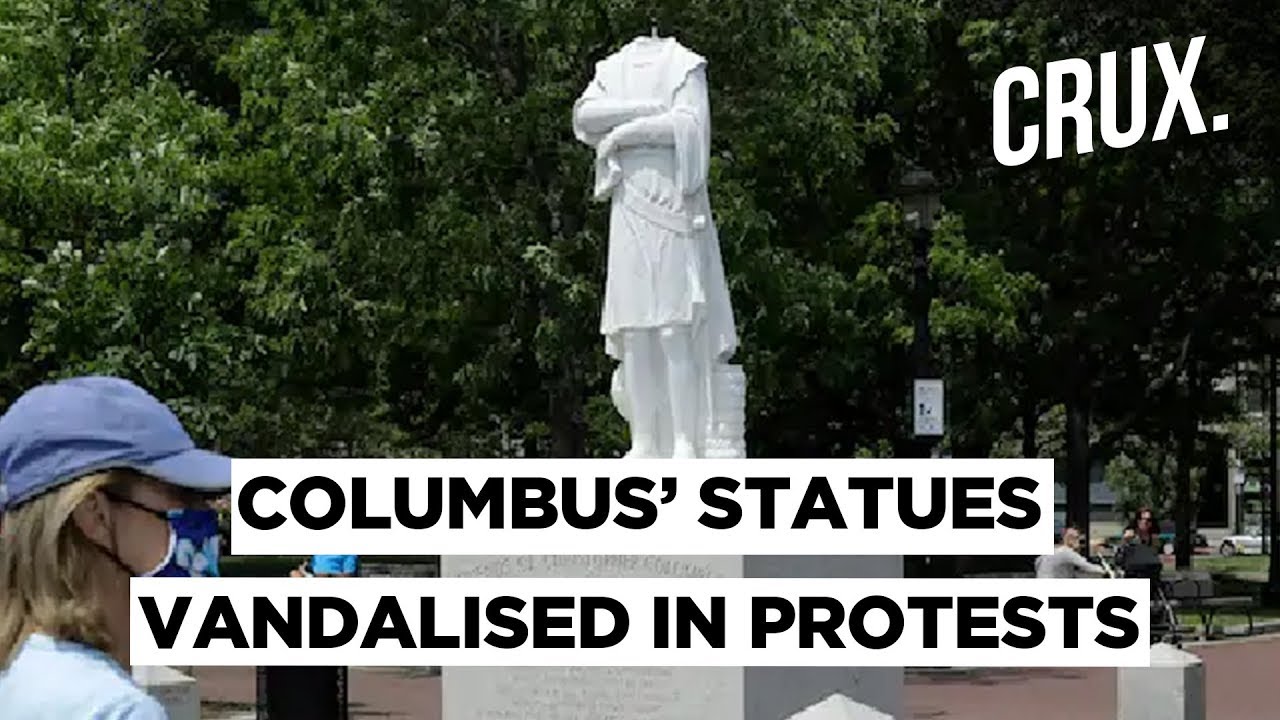 Protesters around the world are now turning towards statues and monuments of famed world leaders, like former British Prime Minister Winston Churchill or Columbus - "icons" whose racist histories have been ignored for decades to glorify them as leaders, explorers and politicians. Protesters have been tearing down these monuments of people who are emblematic of racism as a mark of protest against systemic racism.

READ: Why Hundreds Have Signed Online Petition for Removal of Robert Clive's Statue in UK

In Boston, a statue of Columbus was beheaded. The broken pieces of the head were found in an area a little way off. A very powerful photo of the headless statue was taken by photographer Mark Garfinkel, and later tweeted by NBC.

In Virginia, another statue of Columbus was torn down, set on fire and thrown into a lake. Protesters came all guns blazing, with signs that claimed Columbus represented genocide. In Minnesota, Columbus' statue was attacked too, the head was torn down as protesters danced around it.

Why so much anger against Columbus? Isn't he the "founder" of the Americas? Well it was because it was Columbus who brought racism to America when he apparently discovered it in 1492.

Columbus' legacy is as murky as his activities when he came to the 'new world'. He launched the trans-Atlantic slave trade two years after his arrival, initiated slavery and exploitation of the indigenous peoples in America. The Native Americans had welcomed Columbus and his men to their land, but little did they know that they were inviting their own ruin. Columbus and his crew went on a mass killing spree, captured land and the rest is history.

To have statues of Columbus, who initiated genocide in America, is to glorify violence and racism.

"Churchill was a racist"

Winston Churchill was the former Prime Minister of Britain. He was considered to be a war hero and had led Britain for years. But he was also a racist who is largely held responsible for the Bengal Famine of 1943 which killed over four million people.

Thus when when his statue in London's Parliament Square was defaced with "Churchill" crossed out with black marker pen and the words "is a racist" were written underneath, many breathed a sigh of relief.

"Robert Clive is a symbol of British Colonialism"

On Monday, hundreds of people signed a petition to remove the statue of Robert Clive in Shrewsbury, western England. Clive served as the first Governor of Bengal Presidency under the East India Company in the 18th century, earning the title 'Clive of India'.

With time, however, Clive's reputation has largely been as the man who single-handedly established British rule in India. "Clive as a symbol of British colonialism is significantly offensive to Indian, Bengali and south-east Asian descent and to attempt to justify it as a celebration of British pride and nationalism is only justifiable if one revels in the persecution and murder of millions of innocent people," the petition reads.

The petition came just hours after former slave trader Edward Colston's statue was dragged down and thrown into a river in Bristol on Sunday. Colston, who was born in 1636 to a family of wealthy merchants, became involved in England’s official slaving company back then, the Royal African Company. Now, almost three centuries after his death, Colston has become the symbol of racism during the 'Black Lives Matter' protests in UK.

Why should Kings be spared?

Not just the UK, the resonating voices of the protesters tearing down statues of racist leaders have reached Belgium as well. The former King of Belgium, Leopold II ruled for more than forty years at a time when European countries were busy colonising parts of the world they considered "weak." Leopold, however, was the most ambitious of the lot and had his eyes on the Congo basin in Africa. He carried out one of the biggest genocides the world has seen in Congo, killing over millions of people.

Interestingly, the phrase, 'Crimes Against Humanity' was first used to describe Leopold's deeds.

Yes, it was that bad. Naturally, when the world world is speaking up against racism, it seemed only right to demand that his statues, erected all over Belgium, be pulled down. And so it was.

On June 9, the mayor of London, Sadiq Khan, announced that all statues of world leaders who celebrated slavery or racism in some form or the other would be pulled down. This came after anti-racism activists drew up a list of more than 60 statues in the UK that should be removed.

The George Floyd protests have given birth to an awakening for millions around the world - an epiphany of sorts that was long due. Most of us see these statues and monuments but seldom do we actually pause to think what they represent. Every statue of Columbus or Clive or Colston is a reminder of what they did and the people who died because of their actions, even if it was centuries ago. It is a reminder of how racism and caste-based discrimination is intricately linked to our very existence.

And if we're crying 'Black Lives Matter' and resisting racism in all its devious forms, it is time we stop looking at these world leaders through rose-tinted glasses and see them for who they really were and what they represent even today. With that realisation dawning upon us, their statues don't have a place in the world anymore.