From Community Kitchen to PPE: How Indians Showed Solidarity with Covid-19 Affected

Even as the crisis deepens with every passing day, solidarity is blooming, both offline and online.

Kurt Bayertz, a German philosopher, had once said that "solidarity" comes from society's need to stick together to protect their own interests. He further explained that communities and societies tend to act on behalf of those in need.

Today, the world is struggling to fight one of its deadliest battles against the novel coronavirus. Even as the crisis deepens with every passing day, solidarity is blooming, both offline and online.

While medical professionals around the world scurry to find a solution to Covid-19 and devise a vaccine that can protect future generations, people (nay, bravehearts) are hitting the streets to help out those who have been left to fend for themselves with no means to do so.

In India, where more than 20 percent of the country is below the poverty line, the poor have been hit the hardest as the Indian government tries to save lives by putting the country under a lockdown till May 3. With most industries shut and more than half the population suddenly finding themselves unemployed, the economy has come to a standstill and the damage is insurmountable.

Prime Minister Narendra Modi, in his address on April 14, acknowledged the toll the lockdown has taken on the economy but also specified how saving lives was far more important at this stage.

India also has a vast population of daily wage workers who live hand to mouth even before the coronavirus lockdown in the country snatched away their only sources of income without a warning.

That is precisely why Ambica and Arjun Kapoor of Gurgaon, who run a community kitchen by the name of Shanghai Surprise, came up with an initiative to feed the underprivileged families living in the slums of Nathupur.

"Along with our volunteers, Rachana and Rasika, we've been trying to help out the daily wage labourers who've been left without an income in Nathupur through our campaign, Janta Rasoi," said Ambica Kapoor.

Janta Rasoi, so far, has helped over 1.5 lakh people and is providing at least 2500 meals per day. Both Ambika and Arjun, along with their team of dedicated volunteers, head to Nathupur twice a day to ensure that families there do not starve. Kapoor said that people there were initially apprehensive and only women and children welcomed the initiative but now everyone has actively taken part in the campaign. 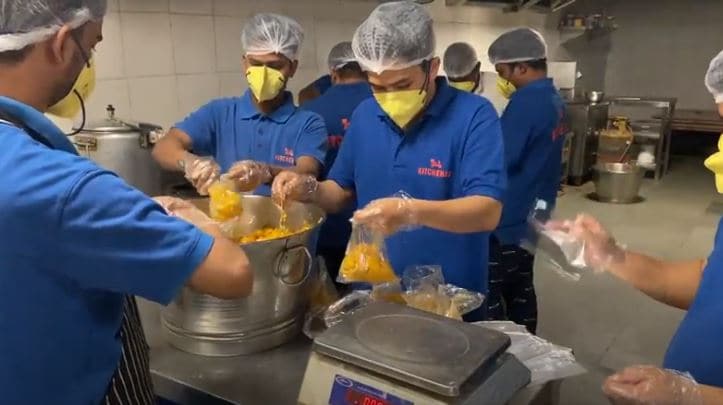 She also said that due to a limited supply of raw material, the menu has mostly been restricted to basics like khichdi or rajma chawal but she ensures that the meals are nutritious and wholesome. The Kapoors have also reached out to the Jeevan Sadhna Charitable Trust in order to help their initiative. If someone wishes to donate, they can drop an email on rasoijanta@gmail.com.

Anchal Sharma, a cancer survivor and founder of the Meals of Happiness Charitable Trust (MOH), also had a similar idea.

Sharma, who was diagnosed with cancer at the age of 32, initially began with distribution of meals to poor kids living on the streets. 11 months later when she recovered from cancer, Sharma started MOH because she believes it gives a sense of purpose to her life.

"We had been delivering around 4000 cooked meals every day since 2019 even before the lockdown was announced. From the very first day of the lockdown, we've been trying to reach out to migrant workers, daily wagers and other people who have been left without an income," said Sharma.

MOH has been operating in and around the Delhi-NCR region and has been helping out people in Vasant Kunj, Chhatarpur, Nathupur in Guargaon and so on. Sharma's NGO often receives calls that people in slums haven't been able to get their hands on food for days. She rushes to such areas with volunteers to deliver food to people in need. 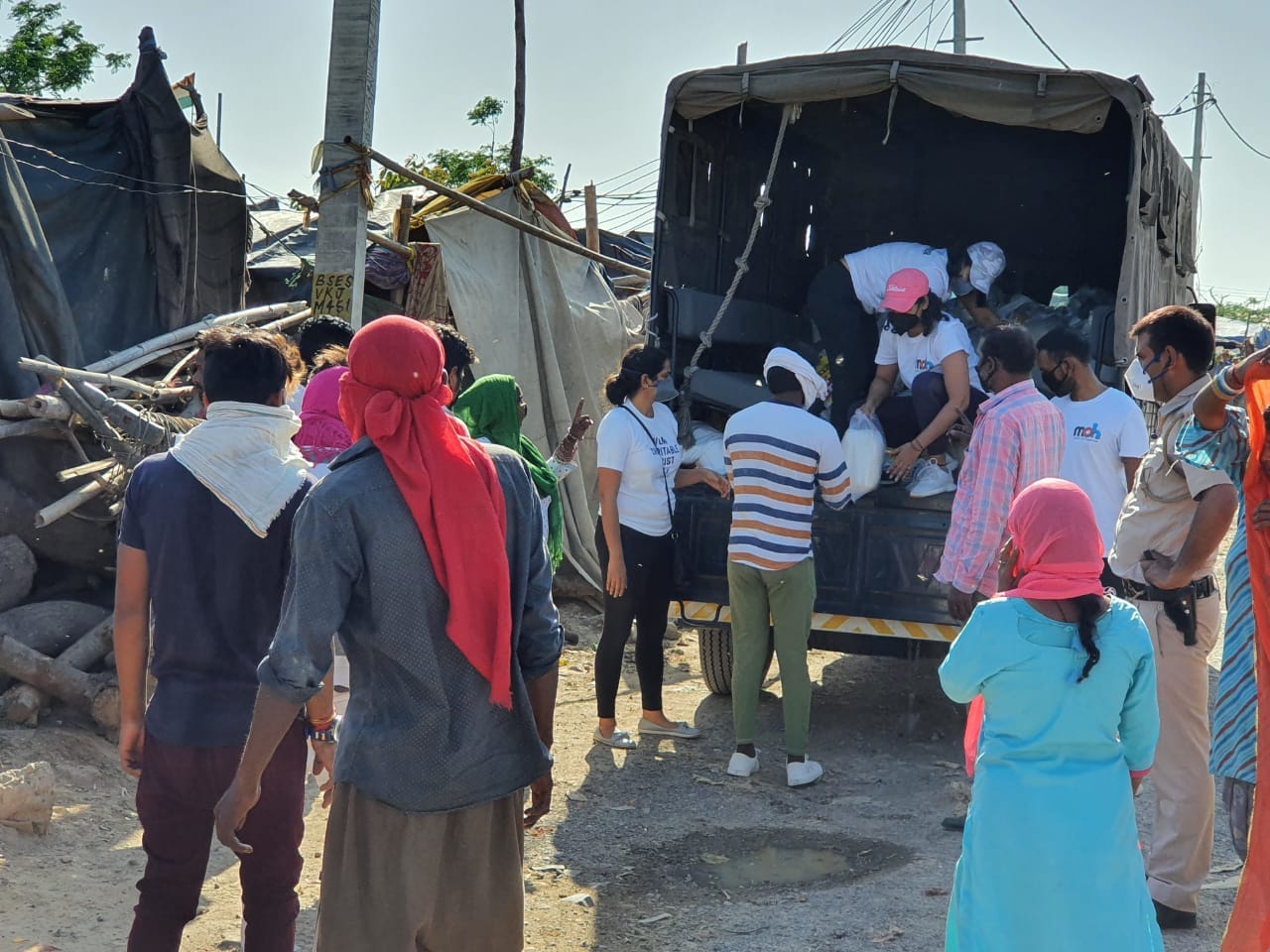 She said that there are thousands of people in Delhi who are struggling to make ends meet as they have no income or savings. She has also been delivering ration to people who have the option to cook in their homes. She also added that the Delhi Police has been immensely helpful in the last few days. However, Sharma believes that there are still others who can barely afford one meal a day and needs your support to keep up her campaign.

To donate, one can transfer money to her by paytm or visit www.mealsofhappiness.org.

For Mahita Nagaraj in Bangalore, it was the misery of senior citizens living alone in cities which made her start Caremongers India. "Even before the lockdown, several of my friends who were living outside Bangalore reached out to me and asked if I could help out their parents. Soon, I put up a post on Facebook which went viral. It was after that that I decided to start Caremongers," said Nagaraj.

All people have to do is sign up or call the helpline number, 9591168886, in order to speak to volunteers. There is also an open group on Facebook where people can post their queries and ask for help.

"A few days ago, there was 75-year-old in Kolkata who had just returned home from the United States who reached out to us. Although he had been cleared by the doctors and had tested negative for Covid-19, his neighbours had ostracized him and even locked him from outside. Since he had been gone a long time, he didn't even have water or food to survive alone. He called our helpline and one of our volunteers drove down to him with basic essentials and water to help him out," said Nagaraj.

On the other hand, Delhi resident and activist, Mariya Salim and Ayesha Mualla have started an online campaign to gather funds to procure PPEs and protective gear for health care professionals and relief workers.

"We are both part of online groups which have been discussing about and arranging for relief and food to migrants, daily wage earners and others affected by the lockdown. We saw photos of relief workers with little or no protective gear, working tirelessly to make sure prior had meals. Given how contagious civid-19 is, this means risk for both them and the communities that they are helping," said Salim.

She also said that the relief workers she had interacted with had little care for their own safety and were willing to risk it even though they had no protective gear whatsoever. She said that a few days ago a doctor she had been in contact with reached out to her and asked if it was possible to get some PPEs. Her campaign managed to yield Rs 1 lakh in three days and has seen a good response so far.

For those wishing to donate to the campaign, you can click here.

In India, at least 10 million women work as commercial prostitutes. Although it is illegal, sex work continues to thrive in the narrow lanes and corners of cities around the country. Thousands of sex workers in Kolkata have been left without income during the lockdown lockdown.

Arjun Sengupta, a government employee working with the labour department, has his union office in Harkata Gali, a well-known red light area in North Kolkata. After the lockdown was announced, Sengupta says he knew that the sex workers would be the worst-hit in the pandemic. "The society won't even care to look at them," he says, emphasizing how sex workers have always been ostracized from the mainstream society.

Sengupta, along with his colleagues and friends, started a social media campaign  to help out sex workers. His son also helped him gather funds. "Our campaign helped us acquire 1.5 lakh INR in 72 hours. Using that, we bought 400 kilograms of rice, 200 kilograms of potatoes, sanitary napkins and other essentials which we then distributed among the women," he says. 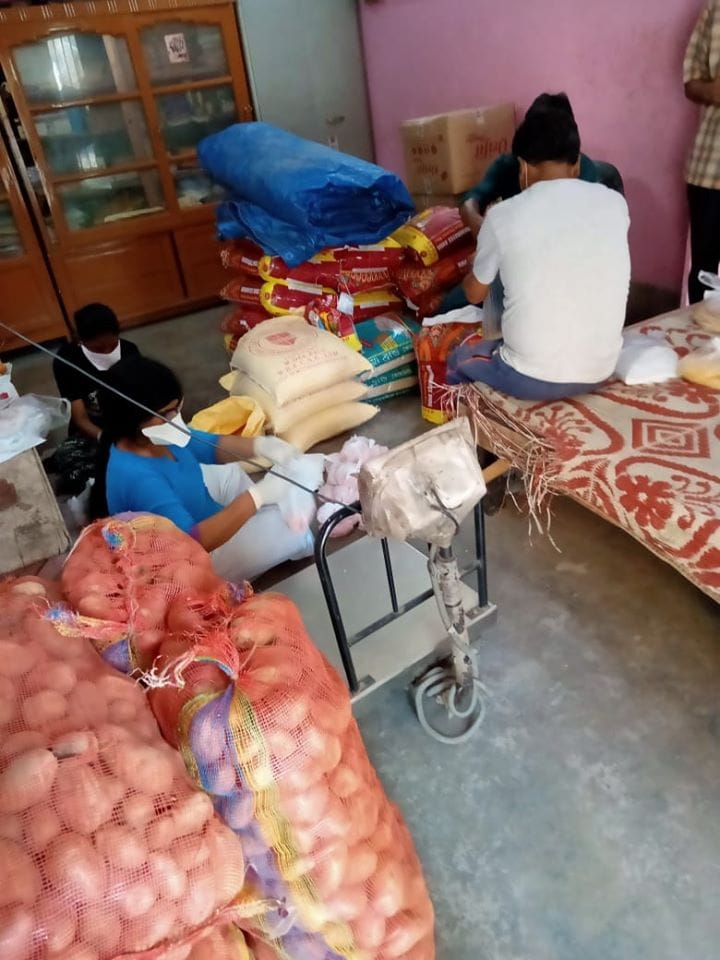 Sengupta also said that next on his list was healthcare professionals and transgenders. He was planning to crowdsource funds for doctors and nurses and essential commodities for transgender communities in the upcoming days.

Another initiative has been taken up by the Rotaract Club in Kolkata, in association with Durbar Mahila Samity, to crowdsource funds to help women living in red light areas. Bishal Modak, a member of the club, says that they have been trying their best to raise funds which can help Durbar buy essentials for the women during the crisis period.

Navamita Chandra of Kolkata has also started a unique initiative along with her friends and acquaintances. "When the lockdown was announced, I knew that people would rush to stock up on essential items like food and ration. I also knew that women wouldn't give a second thought to items that they specifically need, like sanitary napkins," said Chandra.

Hence, Chandra and her friends decided to reach out NGOs who were already distributing food and ration to underprivileged families and arranged kits of their own where they included items like sanitary napkins, soaps and sattu (which is extremely nutritious). She also said that the group had distributed some hundred kits of sanitary napkins in red light areas of Kolkata as well.

The battle against Covid-19 is long and arduous. But the battle isn't the same for everyone.

While some of us have a roof over our heads and are fortunate enough to afford three square meals a day, thousands others have been left homeless and helpless, without any income or savings. Thousands of migrant workers are stranded in foreign lands, with no way back home. For them, death by hunger seems a far more imminent danger as compared to the virus.
Tags: