From Sky-high Uber Fares to Waterlogged Streets, Mumbaikars are Sharing Their Own #MumbaiRains Woes

With problems of waterlogging and a dearth of conditions which would enable proper transportation within the city, social media users are now expressing their woes and concerns on Twitter.

The Mumbai rains have taken the city by storm yet again this year with the Indian Meteorological Department issuing an ‘orange alert’ till September 6.

The alert signified a chance of extreme weather conditions such ‘heavy to very heavy rainfall’ in Mumbai and its neighbouring cities, coupled with the closure of transport facilities and disturbances in power supply. The blaring of the alert would mean preparation for a quick evacuation and protect oneself from severe weather conditions.

With problems of waterlogging and a dearth of conditions which would enable proper transportation within the city, social media users are now expressing their woes and concerns through their posts using #MumbaiRains hashtag on Twitter.

Today’s Weather Update: The only way your umbrella will protect you from rain water is when you’ll sit at home with it.#MumbaiRains #Monsoon2019 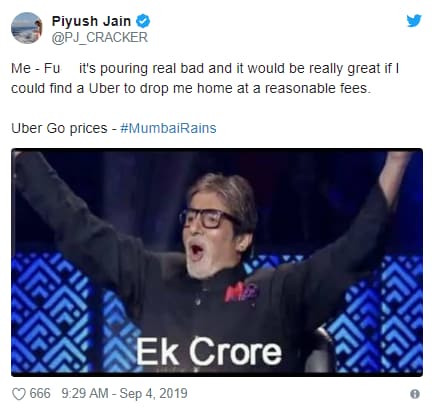 Most users complained about the hike in the price of online cab services such as Uber and Ola, which showed exorbitant rates for short journeys and more often than not, showed that there were no cars available.

Are we earning for them? This is crazy as hell #MumbaiRains pic.twitter.com/FeD7E5zyox

Some users narrated their own #MumbaiRains story on the auspicious occasion of Ganesh Chaturthi.

If this rain goes for a week like this we can immerse Ganpati on roads. #MumbaiRains

On a rainy day where rickshwalas treat u like roadside filth, a Rickshawala readily agreed to take us and our Ganpati to the Visarjan zone. He did not even take the fare money. He said "Yeh meri Bappa ke liye seva hai"#MumbaiRains #GanpatiBappaMorya #TuesdayMotivation

Because Childhood knows Only the Pure Form of Love and Devotion has no boundaries..!! #MumbaiRains #BappaMorya pic.twitter.com/V37Cf2cVi3

Met Dept : Owing to El Nino, atmospheric pressure and what not, not much rains expected in September.Shri Ganesh : Hold my modak...#MumbaiRains

The woes faced by the residents of Mumbai are terrifying to say the least, as they have to battle their way through waterlogged roads and make it to their respective workplaces.

When your boss is 188 years away but still asks if you're at work.#MumbaiRains

#MumbaiRains: IMD has issued a red alert for Mumbai for next 24 hours owing to active weather systems leading to continuous downpour all across city and suburbs. Here are visuals from Parel.LIVE news & updates: https://t.co/Y3dgeFF0OY pic.twitter.com/UXUJNEqOoL

Me and my colleagues on our way to work today #MumbaiRains pic.twitter.com/IRrswfv7lf

#MumbaiRainsHow Do we go to office this way man? Boss is so Ruthless pic.twitter.com/7vRNHRxKni

For those who remained indoors and looked out of their windows to see the pouring rain flooding their city, the rains were called positive adjectives, even though the users empathized with those out on the road.

It’s a beautiful weather to be at home! I can imagine what an annoying weather to get out of he house & work! Just be safe guys it’s crazy how the rains aren’t stopping! #MumbaiRains pic.twitter.com/rhNthL7exp