'Give Her a Condom': Sexist Trolls Target Pregnant Jamia Student Arrested Under UAPA

Safoora Zargar is an MPhil student ad member of the Jamia Coordination Committee who was arrested on April 10 under UAPA act while being pregnant | Image credit: Twitter

Even as the viral Instagram account 'Boys Locker Room' brought back discourse about "glorification of rape culture" in India, many on the internet felt that what was happening to Zargar was yet another example of rape culture and normalisation of violence against women.

Arrested for inciting violence during protests against the Citizenship Amendment Act (2019), Zargar has been in judicial custody Tihar prison since April 10th following an FIR. She is reportedly 14-weeks pregnant and currently in quarantine within prison premises.

The scholar, who applied for bail and almost got it on grounds of her pregnancy and other medical conditions on April 13, was remanded with yet another FIR during her bail hearing and slapped once again with UAPA, keeping her further imprisoned. She is currently in prison in connection with her alleged involvement in the anti-CAA protests at Jaffrabad that preceded the sectarian violence that broke out in North East Delhi in February.

Zargar’s case has attracted both national and international attention with several human rights activists, and even politicians seeking her demand on humanitarian grounds. Many have criticised the “witch-hunt” being conducted by investigating authorities to weed out anti-CAA protesters and students critical of the government by tagging them as threats to national security under the draconian UAPA Act.

Amid criticism, however, fake news and rumours, as well as sexist trolling of Zargar, have also gained ground. In wake of her arrest and consequent outrage against it on social media, sexist and bigoted trolls have been spreading rumours about Zargar’s pregnancy, raising questions on her dignity and the identity of the father, and even accusing the student of using the pregnancy as a ploy to evade legal proceedings.

One of the first such tweets came from Manoj Kumar Azad, who claimed to be a Bharatiya Janata Party worker from Uttar Pradesh. Azad said that Zargar was arrested and then found to be pregnant in jail. This, however, is not true, as several reports at the time of her arrest claimed she was pregnant, meaning authorities knew she was pregnant at the time of the arrest.

BJP leader Kapil Mishra, who was accused of inciting violence in February, also tweeted about her pregnancy.

Please don’t connect her pregnancy with my speech

It doesn’t work that way https://t.co/WtKokksIqR

A barrage of sexist comments and tweets have since followed. Some insinuated the Zargar was unwed and pregnant with an illegitimate child. None of these allegations is true or of consequence to her arrest or the charges against her. In fact, Zargar’s husband and family spoke to The Print and clarified that she was indeed married, but that they did not want to name him in public or dignify the trolls with a response.

But trolls nevertheless used the rumours and fodder to troll the MPhil student. Some of the tweets were deeply regressive, sexist and sexually offensive in nature and attempted to raise questions on her character in order to malign the student and justify her arrest. President of Jawaharlal Nehru University Students’ Union Aishe Ghosh called the targeted trolling as nothing but “slut-shaming”.

Some trolls even made memes mocking Zargar and her pregnancy and linked her to Shaheen Bagh protests. The posts have been going viral everywhere from Twitter to Instagram to Facebook.

I am short of words to express my disgust. @TwitterSafety @DelhiPolice@DCP_CCC_Delhi if u can’t take action against these shameful trends and people then you are complicit. Commenting on a women’s modesty in a country where women are worshipped as Devis. SHAME. #सफूरा_जरगर pic.twitter.com/aqKsHpGMZt

Someone said it is #सफूरा_जरगर during CAA protest… Apt if true 🙂 pic.twitter.com/KlhCMfefI2 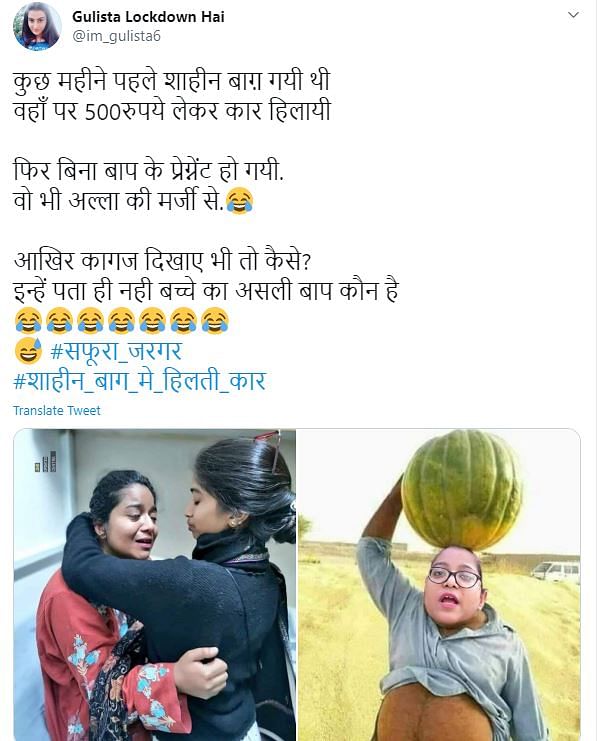 Many on social media expressed outrage against the baseless rumour-mongering and misogynistic trolling. Even as the viral Instagram account ‘Boys Locker Room’ brought back discourse about “glorification of rape culture” in India, many on the internet felt that what was happening to Zargar was yet another example of rape culture and normalisation of violence against women.

Why are some useless Ppl asking if safoora is married or unmarried? How does it matter?
Who the hell are they to question #SafooraZargar ‘s dignity?
It just shows the upbringing of these A******. I am disturbed by all the sick comments & posts everywhere on SM about her.

Looking at some of the sick stuff being shared about #SafooraZargar, it makes me wonder at what point in India we made it ok to encourage a rape culture. At what point did we normalise sleazy, obscene memes and comments about women as politics? This is no country for women.

It doesn’t matter if a woman is married or not. How she chooses to conceive is her choice. A mother is a mother. It is a shame that right-wing trolls cannot even show respect for an expectant mother. Such attacks prove that the Gov, does not have a case against her#SafooraZargar pic.twitter.com/qW0v3dQVkE

The comments on #SafooraZargar should tell you what kind of kids these people bring up. No locker room stories should surprise anyone. Just vile comments.

Journalists and women’s rights activists have also questioned the lax attitude shown by the Delhi Commission of Women, an otherwise vocal proponent when it comes to raising issues of abuse and violence against women, which has remained mum on the issue.