Google, on Thursday, commemorated the ICC Cricket World Cup held in England with a quirky doodle.

Known for its quirky takes on special occasions and influential personalities, Google celebrated the commencement of 45-day long ICC Cricket World Cup on Thursday by dedicating a doodle on it.

"Today’s Doodle celebrates the International Cricket Council’s 2019 World Cup, which opens at the Oval in London," Google said in a statement.

Wishing for the best team to emerge as the winner, the search engine giant further wrote, "No matter how heated the competition may get, cricket is highly respected for maintaining high standards of fair play and good sportsmanship. Hence the phrase “It’s just not cricket,” which describes anything considered unfair."

Once the search engine is open on your desktop or tablet, Google plays a short video graphic of a bowler bowling, the batsman having a go at it, and the fielder finally catching it. 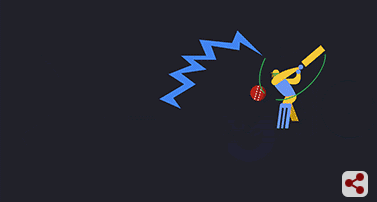 The inaugural match between Eoin Morgan-led England, the host nation, and Faf-du-Plessis' South Africa will formally start off the 12th edition of the cricket extravaganza on Thursday.

The first outing of Team India will begin on June 5 at The Ageas Bowl, Southampton. The Men in Blue will lock their horns with South Africa.