'All of you must have guessed the entry point,' the doctor wrote in a Facebook post describing the bizarre incident.

It was business as usual for the doctors at an Assam hospital when a 30-year-old man arrived and complained about severe abdomen pain.

Upon inspection, the patient admitted to having swallowed nearly a two-feet headphone cable.

But he seemed to be lying.

After examining the patient's stool and conducting an endoscopy on him, the doctors operated on him and found nothing in his gastrointestinal tract either.

Curious, Dr Walliul Islam, a surgeon in Guwahati, decided to take an X-ray of the patient and it was when he spotted a mobile charging cable lying inside his urinary bladder. The cable was removed subsequently.

Islam told News18 that the man had a habit of inserting cables among other things through his penis for sexual pleasure but things didn't go as well as he had planned and cable ended up reaching his urinary bladder. 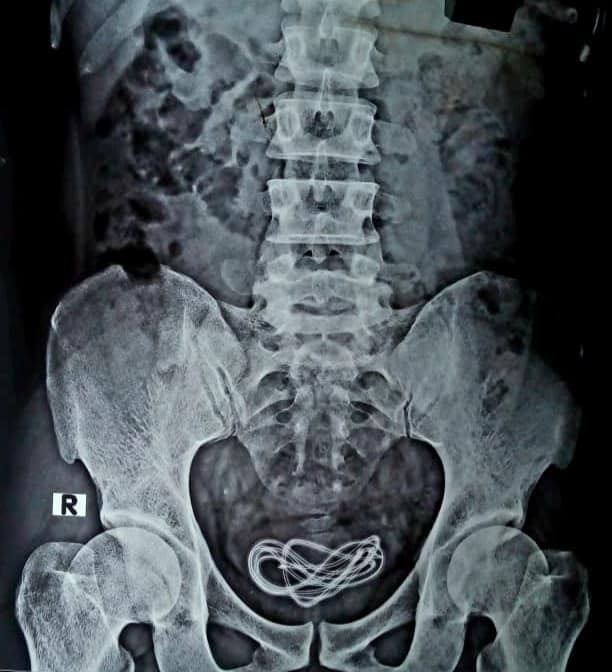 Later Islam took to his Facebook account to share his amusement regarding the whole not-so-usual experience. The doctor also posted a few photos along with a surgery video from the incident that showed the exact moment when the cable was successfully retrieved from the patient's body.

"After 25 years of experience in Surgery, I continue to be surprised and shocked by instances like this where my intellectual and surgical skills are challenged," he wrote.

"A 30 year old man came to me with complaints of pain abdomen and history of accidental ingestion of headphones . I operated upon him to find nothing in his Gastrointestinal tract...but instead discovered a mobile phone charger cord in his Urinary Bladder ....

All of you must have guessed the entry point and route ( it entered through his penile urethra to his urinary bladder) (sic)."

Islam further added that the patient was on a road to recovery.